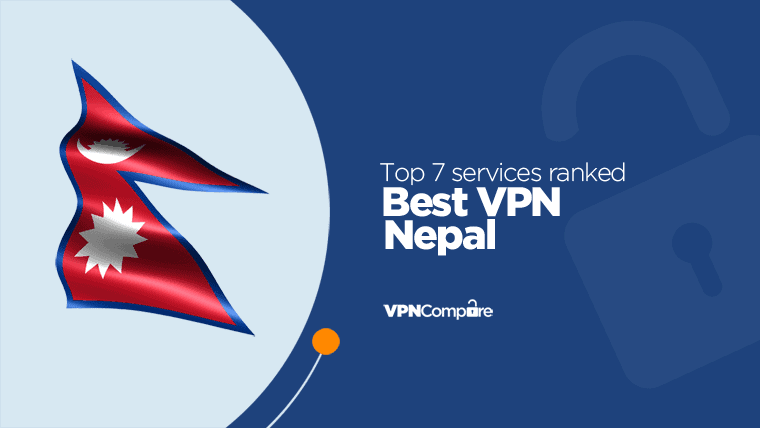 Nepal, the home of the world's largest mountain, vast open mountain ranges with some of the best landscapes in the world.

Choosing a VPN for use in Nepal is like scaling Everest, with so many options and plenty of pitfalls, it's challenging to make a decision. In this guide, we'll be rounding up the best picks for use there.

The country was once the envy of many countries in the region, as they were very open to critical views and opinions. However, in recent years, the government has been passing legislation after legislation, taking away the public's ability to speak freely online.

Earlier this year, Nepal's IT Bill was passed stating that the government could punish any person who speaks negatively about the government/country with a minimum of 5 years imprisonment and 1.5million Nepali Rupees or $13,000 (Source: Kathmandu Post).

Below I'll show you the top services to use in Nepal.

When it comes to VPN's, ExpressVPN firmly holds it's position at the top of the table.

With servers located in Nepal and nearby India, Thailand, and Australia, plus many others, you'll never struggle to find a secure connection.

ExpressVPN is also compatible with most devices, with dedicated apps for each one that you can download via your devices app store, or from the ExpressVPN site.

They have been around for just over 11 years now, and have a proven track record of keeping no logs. This means that your browsing data isn't saved, and the government won't be able to access it. They've also been audited by a third party to confirm this is true.

You will have unrestricted access to all websites and apps while you browse the internet semi-anonymously. You will be able to access many of the news websites that have been blocked by the Nepalese government and post without the need to reveal your identity.

If that wasn't enough, they offer a 30-day money-back guarantee, so if you are unhappy with the service, you can have a full refund.

Our #1 Choice for Nepal

NordVPN is another good choice for use in Nepal. They have been around since 2012 and have a good track record.

Their strict no logs policy means that your data isn't collected and stored by them, meaning that the Nepalese Government won't be able to access your browsing history.

Servers aren't available directly in Nepal but are in nearby India, Thailand, Malaysia and much of Asia.

NordVPN also offers you the ability to pay for their services using cryptocurrency, so you can pay without needing to give over details of who you are. Plus there's a 30-day money back guarantee available here too.

Next up is CyberGhost VPN.

CyberGhost VPN offers what they call ‘military-grade' 256-bit encryption so your connection will be extremely secure. It's industry standard and currently known to be unbreakable.

They have a no-log policy which is one of the first things you want to look for when selecting a VPN. However, it hasn't been audited, which is worth bearing in mind.

They also offer a 45-day money-back guarantee which is a significant 50% longer than what other VPN services offer, so you will have quite a while to try the VPN out before you are 100% committed to your purchase.

Surfshark VPN is one of the cheapest VPNs on the market with prices as low as $1.99/ month. But don't let that fool you, they are one of the best VPNs around at the moment.

Surfshark works exceptionally well with streaming platforms such as Netflix, unblocking over 15 different regions. Great if you love binge-watching movies and TV shows from across the globe.

The service allows you to connect an unlimited amount of devices so that your whole family can use the one account.

Servers aren't available in Nepal but neighbouring India and with others in the region such as Thailand, Kazakhstan and Malaysia.

WeVPN offers some of the best prices on the market and allows you to connect up to 10 devices simultaneously to your account.

This is more than enough for most meaning all of your devices are safe and secure from government snooping.

They're a new service so a little thin on locations right now but our speed tests show they are impressive so certainly one to watch. Servers are available in India for use from Nepal.

You will also have access to the inbuilt best location finder, this does exactly what it says and finds you the best server to connect to in regards to your location.

This is incredibly useful and will ensure you are getting the best connection speeds from Nepal as they expand their server reach.

VPN.ac keeps everything they do within the company. They are staffed by security experts and don't outsource any of their critical work to third-parties.

Due to everything being kept in-house, any problems that you may have will be solved quickly by their customer service team.

VPN.ac does not use any analytical services such as Google, tracking beacons, or “Like” buttons, so your activity isn't logged even when visiting to sign up to their service.

There are no servers in Nepal and not too many across the region, so it's more one if you're passing through or holidaying rather than as a resident of Nepal.

IPVanish has been around since 2012 and has a zero logs policy which is paramount when it comes to keeping your data out of government hands.

With over 1,500 servers for you to connect to, you'll never struggle for a connection, and will have no problem accessing restricted content that the government has blocked from you in Nepal.

Again, there are no servers in Nepal but are available extremely close in New Delhi, India.

IPVanish offers a 30-day money-back guarantee, so you can thoroughly test the VPN before you are committed to your purchase.

If you have any problems, they have a dedicated customer service team that operates 24/7, so any problems get fixed quickly and efficiently.

Is there a free VPN for Nepal?

While there may be some free VPN services that work in Nepal, you should steer clear from them for several reasons, after all, nothing is ever “free”.

Here are just a few of the main reasons why using free VPNs is a bad idea.

Some free VPN services will use your internet connection to power somebody else's VPN connection. This could land you in a spot of trouble as any illegal activity performed by somebody else using your connection will lead the authorities directly to you.

Certainly not what you want to happen.

In an ideal world, everything would be free.

Unfortunately, it doesn't work like that. Just like TV, when you watch free services you usually need to sit through lengthy advertisements.

Free VPNs are the same, they usually bombard you with adverts which pop-up and can get annoying. More problematic is the number of users all crammed onto the free service. It just isn't built to cope, which means you end up with a pretty slow internet experience.

The “Free” VPN will collect your data and sell it on to 3rd parties. If 3rd party companies can buy your information, then you can be sure that the government will be able to buy your data too.

Whoever has the most money can effectively buy the tracking of your actions.

Worst still, in mid 202o it was discovered a free VPN was publicly sharing user actions because they hadn't locked down their network correctly.

Why do I need a VPN in Nepal?

There are a multitude of reasons why you need a VPN in Nepal and if you've landed on this article, you'll already have multiple personal reasons for needing one.

Below are some of the most common reasons for VPN use in Nepal:

The Nepalese government is tightening its grip on the internet and free speech, many websites such as news reporting sites are being blocked.

In 2017 news site Newssewa.com was blocked (Source: IFJ) after one of its articles criticised a senior member of Nepal's police department.

Another example of recent censorship is the removal of the satirical song “Loot If You Can My Friend” which was a song uploaded to YouTube and pokes fun at the governmental corruption in Nepal (Source: HumanRightsWatch).

By using a VPN, you will be able to bypass these types of restrictions and take back control over what you can and can't see on the internet.

A VPN will open up so many options when it comes to streaming content to your devices.

By using a VPN, you will be able to access other regions Netflix libraries, and content that is restricted to specific areas.

You will also be able to access services that are available in nearby India such as Hotstar, India's Disney+ service and the music streaming service Spotify.

Public Wi-Fi hotspots are well known to be unsafe and are popular places for hackers to target your data.

By using a VPN, you will help protect yourself from these unsavoury characters, and keep your personal information secure.

Not only that but if you are like me and believe your freedom of speech is important, then you will want to use a VPN to help you keep that right. As I mentioned earlier in the article, the Nepalese government is notorious for their strict censorship of the internet.

Plus, the recent IT Bill is left wide open to interpretation and could be abused by those in power.

The last thing you need is to view or post the wrong thing and to land yourself in deep trouble. A VPN will let you post without linking to your internet connection (don't forget to follow other best practices not to reveal your identity).

When it comes to the internet, nobody wants a painfully slow connection.

Sometimes though you will get just that. This is often down to your internet connection having a bad route. By using a VPN, it will help you avoid such a problem by giving you faster access to certain websites, services, and even apps.

Now, this isn't always guaranteed but it can help you in certain circumstances.

Generally speaking, a VPN will slow your connection speed down by approximately 7-10% in normal circumstances, but that is the price you pay for surfing the world wide web semi-anonymously and privately.

In other specific cases, you may see a speed boost and be able to access sites and services that would otherwise be ‘down'.

If you are a resident of Nepal, you should get yourself a VPN.

To keep yourself out of the government's sights, protect your browsing data, and to view content that has been blocked or restricted, you'll need a VPN.

After researching numerous options, ExpressVPN is our top pick.

They offer some of the fastest connection speeds and work very well with services such as Netflix and other streaming platforms. With over 3000 servers worldwide, servers in Nepal and many close by, you will have no problem finding a connection point whatever your needs.

Get our Recommended Nepalese VPN service!