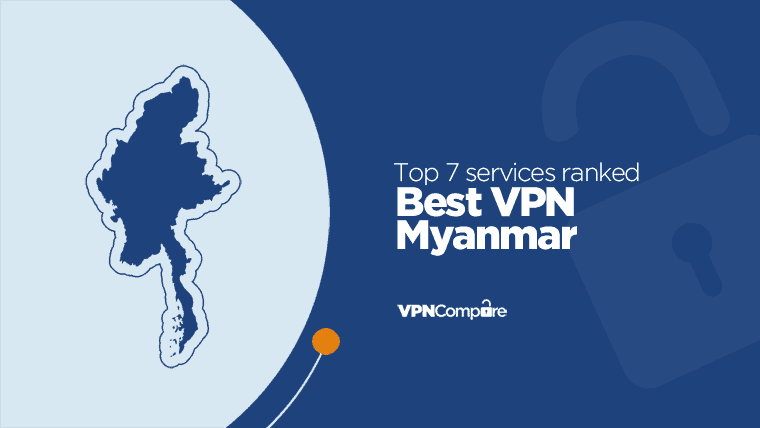 If you plan to visit Myanmar (often called Burma), move there, or if you are a local, you may know that the country has a significant problem when it comes to online censorship and surveillance.

Using a VPN is essential to stay secure and in this article, I'll be discussing the best services to use there.

Prior to mid-2012, freedom of the press was pretty much non-existent in the country, and freedom of speech had a huge question mark hanging over it.

Things are better these days, although not by a lot, as the internet remains classified as ‘selective'.

By all means, in 2012, Myanmar was listed as an internet enemy by Reporters Without Borders, so even passing through the country means that you won't see much on the web without a VPN.

We've ranked the top VPN options below, all you need to do is choose one.

ExpressVPN is a well-known and popular VPN service with millions of users around the world. They're what I would class as one of the “big two”, the other being NordVPN which I'll examine later in this article.

That also includes Myanmar, as well as numerous other nearby countries, such as Malaysia, India, Pakistan, Sri Lanka, Philippines, Laos, and many others.

ExpressVPN values users' privacy, which is why it doesn't keep logs. Being a VPN from the British Virgin Islands, it is in a privacy-friendly environment that allows it to delete users' activity without the government requesting otherwise.

The service also offers dedicated apps for pretty much all systems and devices; it features secure encryption and a special ‘Lightway mode' plus a selection of the best security protocols.

Their monthly price is a little expensive but very cheap when taking 12 months and our readers get 3 months free. There's also a 30-day money back guarantee if you're unhappy.

Our #1 VPN for Myanmar

Next up, we have CyberGhost, a VPN that has an even more extensive server network of 6,200 VPN servers located in 90 different countries around the world.

Unfortunately, Myanmar is not on the list of supported countries so you'll need to stick with ExpressVPN above if required, but there are many of the surrounding nations available.

That includes the likes of India, Malaysia, Macau SAR China, Taiwan, Thailand, Sri Lanka, and many others.

Other than a strong and vast server network, CyberGhost also has fast speeds, strong encryption, robust security protocols, a kill switch, and more.

But, the feature that stands out the most is its lengthy 45-day money-back guarantee.

In the third spot, we have NordVPN, the second of the “big two” VPN services, this time from Panama.

NordVPN has over 5,362 VPN servers located in around 60 countries across the world. Unfortunately, NordVPN does not have servers in Myanmar either, but there are many in nearby countries that can be used as alternatives.

Some of the best options in order to achieve fast speeds include India, Thailand, Malaysia, Indonesia, Vietnam, Taiwan, South Korea, Hong Kong, and even Japan or Singapore.

NordVPN will keep your data safe, it has been audited to prove it doesn't keep logs, and it has a strong 30-day money-back guarantee that will let you test it for a full month before deciding if it is good enough.

WeVPN is a torrent-friendly, fast, and secure VPN service that has a strict no-logs policy (although it hasn't been audited yet).

It also has more than 100 servers in over 40 different locations around the world.

WeVPN offers a great selection of VPN apps, including Windows, Mac, iOS and Android. We like how simple they are to use and if you're a beginner, you'll appreciate the click and connect ability.

Unfortunately, this service doesn't have a Myanmar-based server. But, there are several servers in nearby countries of India, Singapore, Hong Kong, and Japan.

WeVPN is easy enough to use, and, just like the others, it also features a 30-day money-back guarantee.

Up next is IPVanish, a long-standing and reputable VPN service that offers fast and private connections, as well as total online freedom.

The service also has a 30 day money-back guarantee and is in the mid-price range. We found speeds to be good on the service comparable with the better services.

Alongside the usual powerful security protocols and encryptions, IPVanish also offers a server network of 1,500 VPN servers in 75+ different locations.

While Myanmar itself is not among them, there are servers nearby in Taiwan, Philippines, Malaysia, India, Singapore, South Korea, and other countries in the region.

Nearing the end of our list, we have VyprVPN, a VPN that has introduced the faster WireGuard, a new security protocol that might be the best new invention in the VPN industry.

It also has servers in over 70 countries across the globe. In total, that is more than 700 servers, and over 200,000 IP addresses waiting to be used.

Once again, the service has no servers in Myanmar itself.

And, if you change your mind about using the service, there is always a 30-day money-back guarantee to get your refund.

Last but not least, we have Surfshark. Now, this is another VPN from the British Virgin Islands, which means that it is also located in a privacy-friendly region, and as such, it can afford not to keep any logs.

Surfshark also stands out because it allows you to connect an unlimited number of devices with a single license.

It offers 1700+ servers in 63 countries, although Myanmar is, once again, not among them. But, it does feature servers in Azerbaijan, Hong Kong, India, Kazakhstan, Indonesia, Vietnam, Taiwan, Thailand, Philippines, and other nations in the region.

It works great for Netflix unblocking a massive 15 different regions and as with other services has a 30-day money back guarantee.

Why do I need a VPN for Myanmar?

A lot of people might view the VPN as just another expense, and would like to know why they should use it in the first place.

Here are a few reasons to think about using this technology in Myanmar:

Myanmar had quite a problem with online surveillance up to 2012 when some changes made the situation somewhat better.

The results have shown that five sites presented signs of HTTP or TCP/IP blocking (Source: OONI).

Interestingly, that included the sites of Myanmar's US embassy, as well as the Organization of American States (OAS). Even now, the reason for censoring these websites is not apparent.

Even so, the 2012 political reforms seem to have done a lot to improve the situation in the country.

Before this, the country was censoring most content related to pornography, or pro-democracy groups.

It also blocked 85% of email services, it licensed cybercafes, and their owners were forced to create and save screenshots of user activity every five minutes and deliver them to the government if requested.

However, while things have improved, it's not perfect and it pays to use a VPN to stay safe from online surveillance.

As mentioned, online privacy was low in internet cafes, and while the situation is better today, users' online actions are still being recorded in full by ISPs.

You can choose to stop your internet provider from recording your data, and prevent advertisers and other firms from storing it on their own.

It is essential to be aware of the fact that all of your online actions are continuously being monitored and that's not only a situation in Myanmar but rather in the entire world.

To keep your privacy, a VPN service is necessary.

Another reason why you might want to use a VPN in Myanmar is to improve your streaming experience.

As you may know, there are plenty of streaming services around the world that offer all kinds of shows, movies, documentaries, anime, and more. Accessing them from Myanmar is not always possible and the likelihood of them coming to Myanmar is remote.

However, with a VPN, you can connect to another country and unlock all the content that that country has access to.

You can unlock a much more extensive Netflix library, unblock BBC iPlayer, Disney+, Hulu, HBO, and many, many others.

To this day, freedom of speech is not guaranteed by the law in Myanmar, and it often leads to conflicts and controversy.

One of the more well-known conflicts is the Rohingya conflict, which is an on-going issue in the northern part of Myanmar's Rakhine State.

It is mostly characterised by sectarian violence between the two communities, the Rakhine Buddist community and Rohingya Muslims.

And, thanks to its control over the internet, Myanmar's government is strict about social media and what can be posted about the situation.

While not restricted, it is under massive surveillance and control, so what you post could cause issues.

Is there a free VPN for Myanmar?

There are free VPN services for Myanmar, yes.

However, we would strongly advise against using them, and so does every security, privacy, and technology expert out there.

Everyone likes free stuff as opposed to paying for it, but sometimes, the price you have to pay is a small one when compared to the price you pay when you take a flawed free product.

Some of the reasons why you should avoid free VPNs include the possibility of installing a VPN app infected by malware.

Another is the possibility that it might start using your internet connection for the app developer's purposes. It could steal and sell your private data, or claim to be a VPN but only act as a proxy, thus exposing you while you think you are safe.

They are also slow, with only a few servers, and often overcrowded. Not to mention that they are unable to actually unblock anything, as they get easily discovered due to their inadequate, outdated technology.

Is using a VPN in Myanmar legal?

VPN technology is legal in the majority of the world due to the fact that it is viewed as privacy technology, and privacy has been recognised as one of the rights that everyone has.

However, some countries are the exception, including China, Iran and Russia, where they're either illegal, discouraged or frowned upon.

But for Myanmar, you're good to go!

How to get a Myanmar IP address?

If you're outside Myanmar and want to obtain a Burmese IP Address, then the process is simple.

For this, you'll need to use ExpressVPN who is the only VPN service on our list that offer servers in Myanmar. 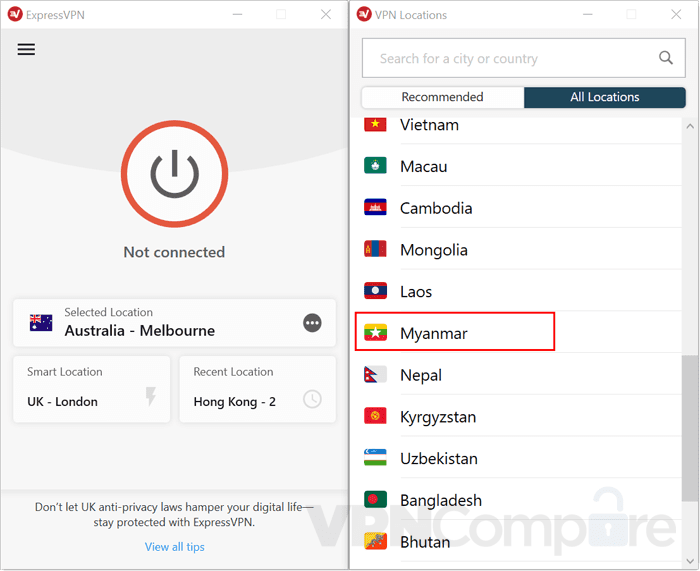 At this point, you will have a Myanmar IP address, and you will be able to see anything as if you were in Myanmar.

Myanmar is a country with troubling laws and rules for its population, both in the online and offline world alike.

Using a VPN is essential if you want to avoid censorship, enjoy freedom of speech, unlock streaming content and generally stay secure and private on the internet.

We have discovered ExpressVPN is the best service for this with servers in Myanmar, fast speeds and an all round superior service.

Don't forget they've got a 30-day money back guarantee so you've got plenty of time to test the service.

Which VPN service did you sign up for? I would love to know how you found it in Myanmar so why not drop me a comment below?

Get our Recommended Burmese VPN service!