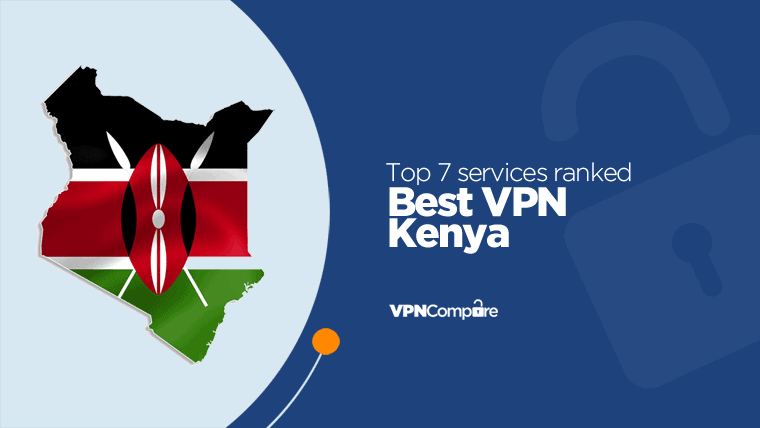 Kenyan internet has been improving over the years but like most countries, restrictions and censorship are a concern.

So if you're looking for a VPN, the question is, which of the hundreds of services are suitable there? After much research and testing, it's what we'll be answering in this guide.

Online threats are a real issue not just in Kenya but worldwide and even if you're not overly concerned about your online privacy you may be interested in unlocking entertainment content from across the globe.

Whatever your need for a VPN, we've got seven that will satisfy your every usage scenario.

In the first spot, we have ExpressVPN, one of the best in the world. There's a reason we've rated it our top provider three years running.

It has blazingly fast download speeds, which will be perfect if you're after streaming movies and TV or downloading large files.

It also offers over 3,000 VPN servers in 94 different countries, totalling in over 160 locations. It even has servers in Kenya, so you can also browse local content securely with little speed impact.

Apart from Kenya, ExpressVPN also has servers in South Africa, Egypt, and Algeria.

Of course, the service has a lot more to offer. It keeps no logs of user's browsing, something that was proven through third-party audits.

It also provides a massive number of dedicated apps for all kinds of devices and systems, and it has affordable prices, especially when taking their 12-month package.

Lastly, if you decide that it doesn't work well for you, you can always use its 30-day money-back guarantee to get a refund.

Get the #1 VPN for Kenya

Next up, we have CyberGhost.

This is a VPN known for its speed, security, the ability to unblock streaming services around the world. We especially like the feature which shows you where to connect to unblock specific services.

It has over 6200 servers in 90 different countries, offering a total of 111 covered locations around the globe. Of course, that includes Kenya, in which it has ten servers.

There are other countries in Africa that are covered as well, such as Nigeria, South Africa, Egypt, and Algeria.

CyberGhost also doesn't keep logs, which makes it perfect for those who desire true privacy. Although this hasn't been audited like ExpressVPN above.

It also features an impressive 45-day money-back guarantee, which is one of the longest ones in the industry.

In the third spot, we have Panama-based NordVPN, which was also confirmed not to keep any logs or records of user activities.

NordVPN comes with a full package, including affordable prices, top-notch security, as well as a 30-day money-back guarantee.

It also features 5564 servers in 59 different countries. Unfortunately, Kenya is not among them. In fact, the only African country that is covered is South Africa, where it has 53 servers.

This should be close enough for you to connect if you need decent speeds, but if you require a local server you'll need to stick to the two providers above.

Also, most servers support P2P traffic, including the one in South Africa.

Then, there is HideMyAss, or HMA, an audited, no-log VPN that claims to offer more server locations than anyone else.

HMA offers more than 1100 servers in 290 locations. But, the truly impressive part is that those locations can be found in over 190 countries.

However, there is a caveat with this in that many of the locations are ‘virtual' locations. Essentially this means they're not physically located in that country.

If that isn't a concern then HMA covers nearly the entire world, including Kenya, with 2 servers located in Nairobi.

Apart from Kenya, HMA covers pretty much Africa entirely, including Algeria, Angola, Benin, Botswana, Cote Divoire, Congo, Chad, Libya, Ghana, Gambia, and most others. Although, again, many of these are ‘virtual' locations.

It also covers a huge number of devices and systems, and its prices are among the lowest that top VPNs are offering.

Following that, we have VyprVPN, which is a service that features a new type of security protocol, WireGuard.

This is the VPN of choice for more than 2 million people, according to its claims, and it allows you to use it on 5 devices at the same time.

There's also a dedicated mode called Chameleon that allows you to break through restrictive networks.

VyprVPN also has a major server network, featuring more than 700 servers across the world.

It covers 64 countries, in total, but unfortunately, Kenya is not among them. Algeria and Egypt, on the other hand, are.

In fact, these are new, recently added servers. So, as VyprVPN continues to expand and add more countries on the list, Kenya might be available in the future.

Next, there is IPVanish, which has an extremely high positive score given by its users. The VPN service is nothing less than excellent, with its private connections, fast speeds, and complete online freedom.

It features a 30-day money-back guarantee, extremely low prices, and very high security. It also features a strict no-logs policy (unaudited) and plenty of user-friendly apps for all kinds of devices and systems.

Lastly, it has a major server network that spans through 75 countries, with a grand total of 1,500 VPN servers.

Once again, Kenya is not on the list, unfortunately. However, Nigeria and South Africa are. With these two countries, there is a total of 11 servers on the African continent.

Finally, we have Private Internet Access, also known as PIA.

Like the others, PIA doesn't keep logs, and it actually offers quite a lot in the way of privacy. It lets you protect your identity, unblock censorship filters, and bypass geo-restrictions.

It has extremely competitive pricing, it supports torrenting, and is one of the few VPNs that have the new WireGuard security protocol.

Kenya is, unfortunately, not covered. But, some other African nations are, such as Nigeria and South Africa, so there will be nearby servers for you to use.

How to choose a VPN for Kenya?

As you can see, many of these VPNs have a lot of similarities, and that is no coincidence.

Not all VPNs offer all of the mentioned features, which is how you can differentiate the good from the bad.

Having servers based in Kenya is a positive but nearby countries will suffice for many. There are, however, a range of critical features which we explore below.

Speed is crucial for using the internet through a VPN. It matters because VPNs already slow down your connection in order to encrypt it and make it safe.

So, if you are planning to use a VPN for streaming, downloads, or even casual browsing, you must have a VPN that is as fast as possible, so that the process of encrypting and protecting your traffic would not have such big of an impact.

Next, you should look for VPNs that have as many dedicated apps as possible. This is important because most of us have multiple devices that can establish a connection to the internet.

Devices such as smartphones, tablets, laptops, desktops, Smart TVs, gaming consoles, and more, all have access to the web.

With most decent VPN services allowing you to connect multiple devices it pays to use dedicated VPN apps. This takes away any complicated set-up and allows you to get secure with the tap of a button.

Next, you also need a VPN that features a strict no-logs policy.

This is also very important because a VPN with such a policy doesn't record and keep your data on its servers. As such, it cannot leak your info to anyone. Even the government cannot show up with demands for a VPN to hand over your data since there is no data to be given.

But how can you be sure that the VPN is telling the truth?

Well, that is where third-party audits come into play. You see, some major VPN providers, who truly stand behind their words, have allowed third parties to inspect their technology and servers, and these inspections have confirmed that the VPNs truly do not log users' data.

It pays to choose a VPN service with a no-log policy, but it's even better if that policy has been audited.

Lastly, we would recommend that you look for time-served VPN services.

These have been around for years, and as such, they have a loyal user base that keeps paying for their services. This is proof that the VPN truly does offer high quality and excellent features. Otherwise, the users would have moved on by now.

The internet is hard to please, and anyone who manages to create a strong user base and maintain it for years is likely doing something right.

Is using a VPN in Kenya legal?

Yes, you can use a VPN in Kenya without breaking the law.

VPNs are considered to be privacy technology, meaning that they are there for you to protect yourself. And, since Kenya is not a particularly surveillance-oriented country, it doesn't mind if you actually take matters into your own hands and do more on that front.

This is the case with most countries around the world, with only a handful of them prohibiting their citizens from protecting themselves with VPN technology.

These are usually countries with high levels of surveillance, which like to keep a close eye on their citizens. That includes the likes of China, Russia, Turkey, and Iran.

How to get a Kenyan IP Address?

So, if you wish to browse Kenyan content safely, how do you do it? Well, the first thing you will need is a VPN and one that has servers in Kenya.

That way, you can connect to a local server and get a Kenyan IP address. This is important, as you get an IP address of the country in which the server is located.

So, if you connect to a UK-based server from Kenya, you will have a UK IP address, and you will have access to all UK content as if you are there yourself.

If you want to get a Kenyan IP Address, follow these steps:

That's all there is to it, and you can now browse local content in a safe way.

As you have seen, there are plenty of different VPNs worth using. Not all offer servers in Kenya so it's important to decide if that's a feature you require.

Our recommendation is to use ExpressVPN. They offer some of the fastest download speeds, have apps for most devices and provide a fully no-log service.

Critically they have servers in Kenya and across the globe. If that isn't enough then their 30-day money back guarantee gives you peace of mind.

Which VPN did you sign up to? I would love to hear your thoughts so drop me a comment below.

Get our Recommended Kenyan VPN service!