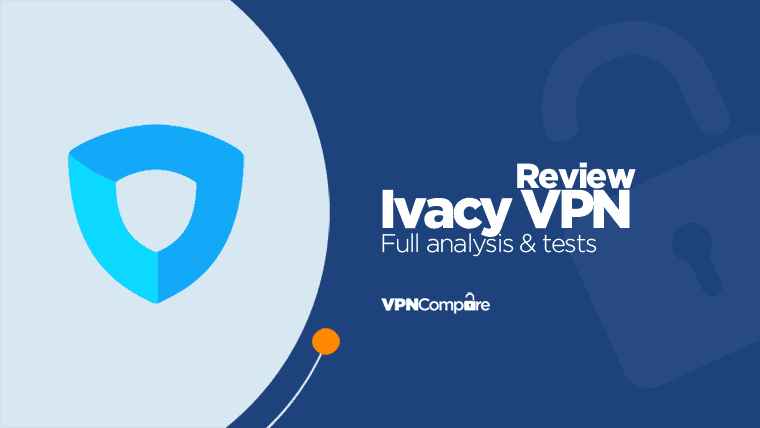 Ivacy has been around a long time and it's a name that often sits in the shadows of the bigger players. We discovered an average service that while not bad is easily bettered by some of the more popular services.

Ivacy VPN is one of those VPN services that have a great reputation, but somehow, they don't get mentioned all that much. At least, that's the common opinion regarding this service.

In our quest to see which VPNs are good and which ones are best avoided, we arrived at Ivacy VPN's door, and will now share what we found after examining it.

Let's start with Ivacy VPN's privacy features. Privacy is essential for a VPN – it is the very reason why many people choose to use it and pay for it in the first place.

Granted, many among us are only interested in the VPN's ability to unblock foreign Netflix or hide our identity during torrenting.

However, some are legitimately concerned about their information being collected by the hidden forces on the internet and wish to secure themselves. If you are worried about this, then this might be the right VPN for you.

Of course, before you can decide that for yourself, let's take a look at Ivacy VPN's privacy.

When it comes to its Privacy Policy, Ivacy VPN claims that it doesn't keep any logs of any kind.

That includes anything that might identify its users' browsing, streaming, or P2P and other downloading activities. In other words, anyone who uses Ivacy VPN can rest assured and consider themselves perfectly and fully protected.

Ivacy VPN will, however, need three pieces of information, which include your name, your email address, and your payment method.

This is necessary in order for Ivacy to provide its services to you, and it cannot be avoided. Most other providers will collect and retain similar information.

This data is used for creating your account, contacting you with surveys, discounts, and special offers (all three of which you can opt-out of), replying to your tickets, and other such things.

However, if you are inactive for 12 months, this information will be deleted entirely, and you will have left Ivacy VPN's systems entirely.

Ivacy VPN even goes as far as to address what it plans to do if the authorities request information about the customer. Basically, the service only has the knowledge that the user chooses to share, and nothing else that they can provide.

Strangely when you agree to their software terms and conditions, you'll find this quote, “We only log access attempts to our servers” which is a little vague and concerning.

Ivacy is owned by the same company that owns PureVPN. PureVPN also claimed to store no logs of their customer activity but in 2017 were fingered assisting law-enforcement from another jurisdiction which led to the arrest of a now convicted criminal.

As mentioned as part of our Ivacy VPN Privacy Policy review, the service keeps no logs about their users' activities, whether that includes browsing, torrenting, streaming, gaming, or any other activity.

The zero-logs policy includes all data apart from the information that you give to the service.

As mentioned above, you need to give your name, email, and payment method in order to create an account. This is the information that will be kept by the service.

If you ever get in contact with the service's customer support for whatever reason, whether you need help, information, or anything else, any information you share with them will be kept as well.

Ivacy keeps such data in order to use it to improve its app and service.

As for technical details regarding Ivacy VPN, there is quite a bit that this service has to offer.

One of the most important things to mention is its touted ‘military-grade‘ encryption, 256-bit AES, in other words, which is one of the strongest and most commonly used across the VPN industry.

Apart from being encrypted, your traffic is also protected by advanced IPSec and IKEv2 protocols. It also offers the OpenVPN protocol, which is the one we would prefer, as it is the strongest one in the industry.

Currently, there appears to be no mention of Wireguard and with many VPN providers now starting to roll out this new VPN protocol, it's something we would like to see Ivacy do the same with.

Some of the other features that come as standard include:

As you can see, this VPN provides a lot in terms of privacy, so you should not worry too much about either leaking data or that the VPN itself will reveal it to anyone.

After all, Ivacy cannot share what it doesn't have, so as long as you are careful about what you share with the service, you should be protected.

Speed is one of the cornerstones of any VPN service, without it, you'll struggle to carry out daily internet tasks, let alone stream anything or game.

So we put Ivacy's speeds to the test from a regular UK residential internet connection, the kind you'll be using at home.

Our base speed at the time of testing without connecting to a VPN was: 59.15 Mbps.

Connecting to a selection of Ivacy's servers produced the following results.

Overall speed, while certainly not the worse we've seen isn't up there with other providers like ExpressVPN or NordVPN, for example.

The nearest server, in the UK produced an acceptable if not outstanding speed. The furthest, Australia, provided an excellent speed.

However, the French server was randomly low and the United States speeds could be faster.

Overall, not bad but certainly nothing to write home about and it's here you'll feel the limitations of the number of users versus servers available.

If you're looking for faster UK speeds specifically check out our Best VPN for the UK guide.

How to use Ivacy VPN?

Ivacy VPN is relatively easy to use.

The service will require your email, name, and payment method in order to get it, as mentioned before.

Other than that, you will also have to download its app for the device you plan to use it on, but we will talk more about the apps in a little while.

The important thing is that you can download the apps from Ivacy's website or from the appropriate app store if you are using a device other than PC or Mac.

After installing the app and logging into it, you will see a connect button with a location selector. 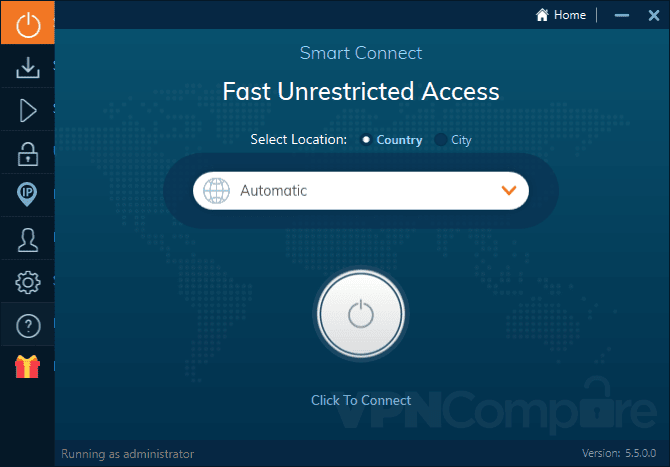 Go to locations to simply select one of its many different servers, and you will be set to go.

When it comes to Ivacy's apps, you should know that they are completely free to download. You can get Ivacy VPN app for a number of different devices and systems, including:

As you can see, Ivacy supports quite a long list of devices, and it even has three browser extensions.

This is important, as these browsers are supported by virtually every other device out there. That means that you can use them on any device, and add Ivacy VPN as an extension to them. 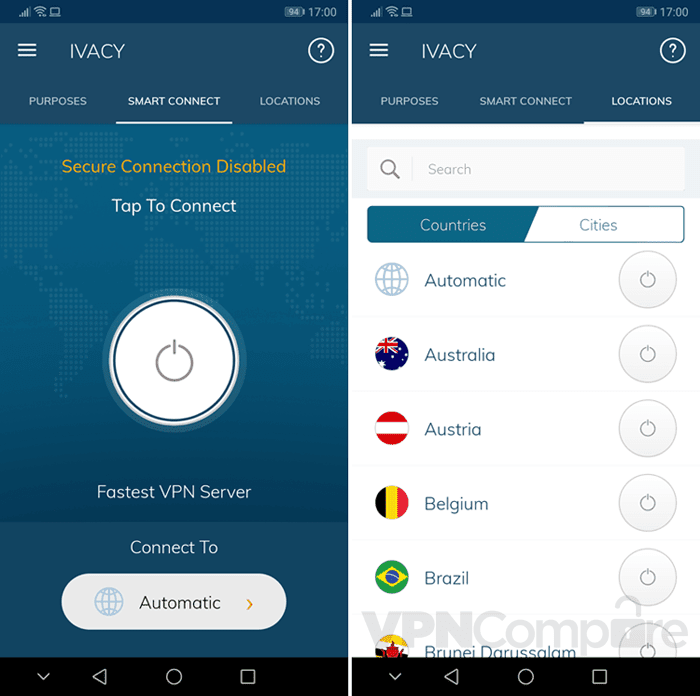 In essence, you can protect every device, whether Ivacy has a dedicated app for it or not, as long as you can use one of the mentioned browsers on that device.

As far as servers are concerned, Ivacy has a pretty massive network that includes over 100 different locations, totalling over 1,000 servers.

1000 servers is a little on the low side these days but much of it boils down to how many users their service has in comparison to the competition.

The locations of their servers should fit most well.

As far as Plans and prices go, Ivacy VPN offers several different plans, while its prices are quite competitive and significantly lower than the industry standard for a VPN subscription.

The two-year plan will let you save up to 77%, although it is only recommended for those willing to dedicate themselves to a single service for an extended period.

There's also a completely free 1-day trial but they don't shout about it so you'll need to do a bit of Googling to take advantage.

The support can be reached via live chat, or you can send a ticket and report any problem that you may have.

The service's support team is generally perceived as polite and helpful, and they answer reasonably quickly, so you won't have to wait for long in order to have any issue resolved.

Live chat is always a bonus as not every service offers it.

So, do we recommend using Ivacy VPN? The answer is, maybe.

The service is secure, with robust security features that you will find among other top VPNs in the industry.

It also has a fairly large server network when it comes to countries but the number of servers is on the small side in comparison to the likes of CyberGhost or NordVPN.

The service claims to keep no logs and we have no reason to disbelieve them.

However, it's worth noting that Ivacy is owned by the same company as PureVPN who a few years back coughed up logs to help in a criminal investigation. All well and good, however, they also claimed not to store any records.

Prices are reasonable, especially when taking their 1 or 2 year package and there's a completely free (although hard to find) 1-day trial.

Speeds on the service are hit and miss, while some servers performed well, others were lacklustre.

All in all, Ivacy is not a bad service, but it doesn't offer anything outstanding either. With other services out there at similar prices, our recommendation is to shop around.

Looking for better services? Consider ExpressVPN, CyberGhost or if you're after a cheap newcomer, Surfshark. 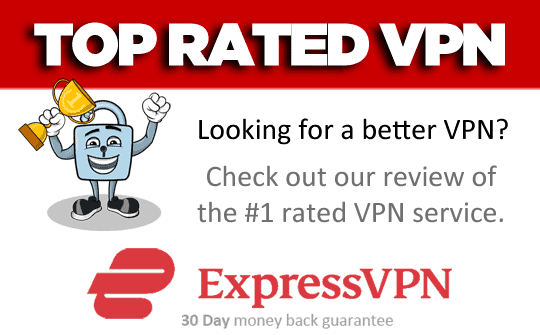