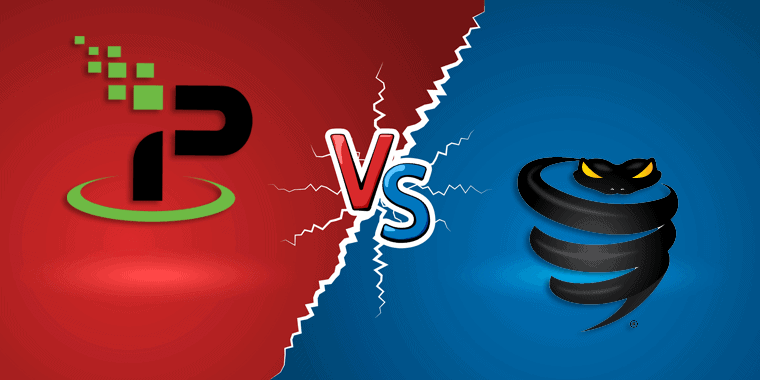 IPVanish vs VyprVPN is the battle of two VPN heavyweights.

Both these VPNs have ranked highly on our site and others for many years. They are big established names in the VPN market and if you are looking for a well-regarded VPN with a good reputation for excellent service, IPVanish and VyprVPN will always be towards the top of the list.

But the question is, which VPN service is best?

Is it IPVanish or is it VyprVPN that offers the best all-round service?

That's what this guide is all about. We will compare all the main features of both VPNs to see which comes out on top.

Before we starting pitting IPVanish vs VyprVPN, it is worth providing a short explanation of the methodology we are using in this guide.

We have identified no fewer than 15 key service criteria that we use when drawing a comparison between two different VPNs.

Those service criteria are:

For each of these criteria, we have examined in detail how IPVanish and VyprVPN perform.

We have compared and contrasted the two VPNs and reached an informed conclusion about which VPN performs best in each category.

At the end of this detailed comparison between VyprVPN and IPVanish, we will reveal which VPN has won the most categories and is therefore judged to be the winner.

But before we get there, let's examine how IPVanish and VyprVPN perform in more detail.

There is not much to choose between them on encryption as both have industry standard levels. But just because of the PPTP levels, IPVanish sneaks this one.

IPVanish offers its VPN users a choice of IKEv2, OpenVPN, PPTP, and L2TP/IPSec protocols. OpenVPN is the default but there is no WireGuard option yet.

VyprVPN has PPTP, L2TP/IPSec and OpenVPN on offer to all subscribers but there is also now the option of WireGuard protocol too.

In addition, VyprVPN users can access their  Chameleon protocol. This is unique among VPN services and supposedly thwarts VPN blocking. 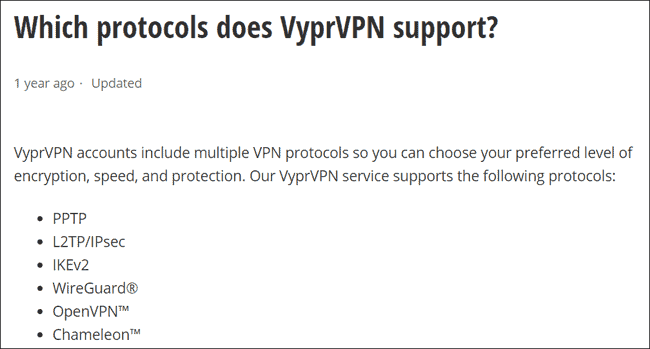 For the wider and more up-to-date protocol options, VyprVPN wins this one.

VyprVPN also comes with these tools built in, so there is nothing to separate them on here.

IPVanish guarantee that they have a no user logs guarantee. However, they have not had this claim independently verified yet. Their overall privacy policies are sound though and they will hide user IP Addresses.

Their claims checked out and their privacy policies are good overall so, for that confirmation alone, VyprVPN has to triumph here.

IPVanish is based in the USA, a five-eyes country and one with one of the most draconian internet surveillance regimes in the free world. However, there are no data retention laws impacting US-based VPNs so far which means they can protect user privacy.

VyprVPN is registered in Switzerland which is not part of the five eyes, nine eyes, or fourteen eyes surveillance networks.

While Switzerland does have favourable privacy laws, it still has some pretty draconian data retention and surveillance laws which require all communications data, including IP Address and metadata to be retained for at least 12 month.

At the moment, this doesn't apply to VPN companies and the independently audited no user logs policy means VyprVPN just win this one.

IPVanish offers 1,600 VPN servers in 75 locations around the world. This gives their subscribers a great choice of VPN servers with high demand countries like the US and UK especially well catered for.

VyprVPN offers 700+ servers, a number that hasn't changed for a long time, in around 70 different locations. Their VPN server coverage is average at best and we would like to see more countries added. 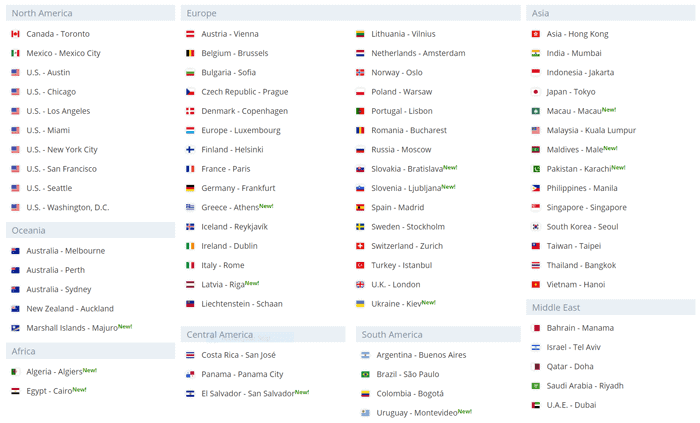 Server locations aren't everything. There is no point choosing a VPN for servers in countries that you won't use. But they can help to boost speeds too by spreading users across a wider range of servers and countries.

Both offer good quality servers but on quantity, IPVanish edges this one.

We ran detailed speed tests on both IPVanish and VyprVPN when reviewing them.

The IPVanish speed test found that both download speeds and upload speeds were impressive and subscribers have reliable connection speeds across their network.

In our tests using our local server our OpenVPN UDP speed was 91.8 Mbps with our non-VPN speed 224 Mbps.

The VyprVPN speed test found that overall connection speeds were satisfactory and good enough for most uses but speeds were hit and miss.

When using our local connection, OpenVPN UDP speeds were a poor 38.3 Mbps. However, when using Wireguard they were 148.3 Mbps.

It should be noted that a speed test is only a snapshot though and these speeds can vary.

Reliability is a subjective headline but we have pitted VyprVPN vs IPVanish for some time now and our opinion is an informed one.

We all agreed that there wasn't much between these two VPN services. Speeds, security, and service was all of a high standard.

But if we had to split them on reliability, for the overall browsing experience and usability, VyprVPN just edged it. They own all of their own infrastructure which lends to a more reliable overall experience.

Both VPNs perform well in this category with excellent device compatibility whether for Android, iOS, Windows, MacOS, Linux, or almost anything else.

On desktop apps, IPVanish and VyprVPN both offer dedicated apps for Windows and Mac OS devices that were well designed and user-friendly. The Windows app on VyprVPN was a particular favourite and Windows tend to be the most-used desktop apps. 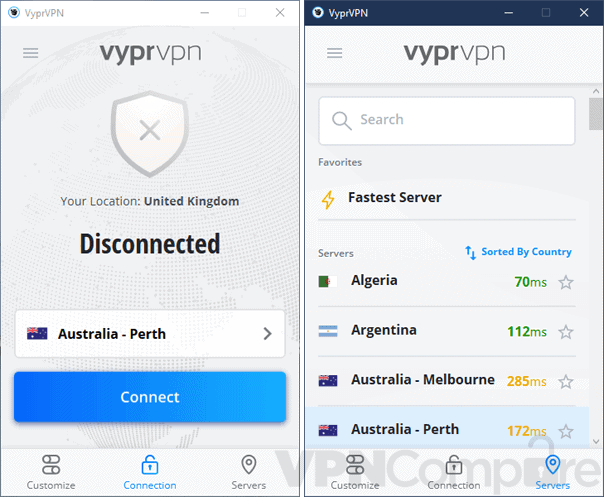 It's well designed and functionable. IPVanish on the other hand also has a reliable app but it looks a little dated. 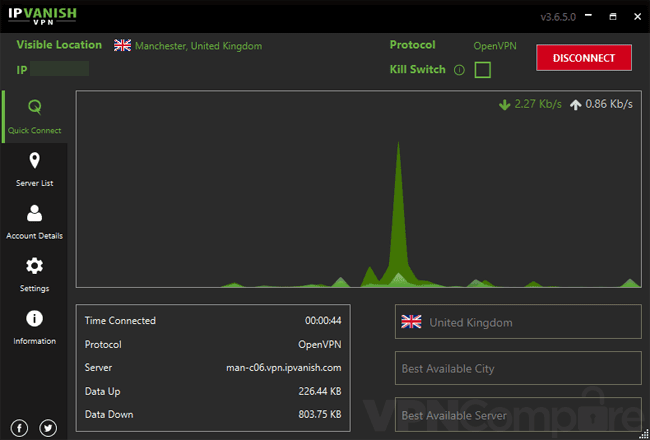 For mobile apps, both have excellent Android and iOS apps. Again the VyprVPN Android app was one of our favourites of all VPNs, not just these two. Both have apps for a range of other devices including Linux, games consoles, routers, and more.

There isn't much to fault with any of their apps, but with their Windows and Android apps really impressing, we're giving this to VyprVPN.

VyprVPN offers a Kill Switch, IP and DNS leak protection, through its VyprDNS service and tool called VyprVPN Cloud which claims to give you extra protection when accessing the cloud. They have dedicated DNS servers too.

IPVanish also has a Kill Switch and DNS leak protection but not a whole lot else. If you opt for their VPN + Cloud Storage option, you can access a few extra things, such as remote device wiping and ransomware protection, but this does come with higher pricing.

Its close but IPVanish wins this round.

IPVanish has recently upgraded to offer all users an unlimited number of simultaneous connections with every account. This is as good as it gets and they are one of only a handful of VPNs offering this at the moment.

In contract, VyprVPN customers can still only get five simultaneous connection per account. There is only one winner here.

IPVanish vs VyprVPN when it comes to streaming is very one-sided.

IPVanish has never been much good at streaming and this remains the case. Netflix is largely unavailable on their service, although you might get lucky once or twice.

The same is true for the BBC iPlayer, Disney Plus, Amazon Prime video and more. Only those streaming services that don't try and block VPNs are likely to work.

With Netflix, VyprVPN is a bit hit and miss too. It does work sometimes but not consistently so.

With BBC iPlayer, Amazon Prime, and most other streaming services we had better results. But the truth is that there are other VPN providers like ExpressVPN and NordVPN who are far better at unblocking streaming services than either of these.

IPVanish encourages torrenting across its network.

VyprVPN however is much less enthusiastic. It is permitted but not encouraged and there have been some credible historical reports of customer accounts being blocked for breaching copyright laws.

If you want to torrent and need a VPN to do it, IPVanish is the best of these two, but there are other excellent VPN providers out there too.

These pricing plans and pricing levels are fairly standard.

This is as cheap as VPN pricing gets. A clear winner.

IPVanish has very limited payment methods available. You can choose to pay by credit card or PayPal and that's it. No cryptocurrency payments are available.

VyprVPN isn't much better with the only addition to the IPVanish offering being Amazon Pay.

In the VPN industry, we have seen huge ranges of methods being available and both of these providers need to up their game.

What really represents value from a VPN provider these days? Pricing alone isn't the only thing by any means. The quality of the overall VPN service and the secure internet access it can provide is just as important.

When comparing VyprVPN vs IPVanish, it is clear that both VPNs have their strengths and weaknesses and the best value VPN provider will depend on what you want from your provider.

If we have to make a judgement call, our pick would be IPVanish

IPVanish vs VyprVPN has proved to be a close call. But there is a clear winner, which is VyprVPN.

VyprVPN performs impressively. Their greater number of protocols and independent no logs verification makes their security and privacy offering good.

Ready to try our winner? Get the #1 VPN!