IPVanish continue to offer an all-round fast service with one or two rough edges that need polishing.

IPVanish is a popular VPN service and has been around longer than most. After so many years at the top of the tree are they still the best about?

In this latest review, we aimed to find out so we’ve been testing their service thoroughly to see how they’re performing, but more importantly, how they compare to the massive competition out there.

IPVanish follows the standard VPN service offering and has one package available that differs in subscription lengths.

As is the case with most providers the longer you sign up for the cheaper the service becomes. While many VPN services have started to introduce subscription periods of over 2 years, IPVanish has stuck with 1-year maximum periods which can be both a positive and negative which I’ll explain later.

The current package prices at the time of writing are:

EXCLUSIVE: Get up to 57% off using this link.

The annual package is nearly 57% cheaper than paying on a monthly basis so it’s well worth considering if you plan to sign up.

IPVanish doesn’t offer package lengths over 1-year while many other providers do. The advantage to this is VPN service quality can and does change so being locked in for periods of over 1 year is often risky.

The downside is the savings are smaller. Often other services will offer up to 70% off their monthly price for locking yourself in between 3-7 years.

In 2018 they introduced the IKEv2 protocol and it’s more common now to see their apps using this by default. They introduced this as they say it is faster than IPSec and claimed more secure.

Almost all their apps now support this additional protocol.

IPVanish claims to store no-logs of your activity. This is information like what websites you visit, what you’re saying to friends when chatting or the videos you’re streaming.

They go one step further and also claim they don’t store metadata. This is the who and the what. For example, metadata isn’t what you say to a friend when chatting but it’s who you’re talking to and the time of the messages.

It’s critical on its own and it can link you to your activity so it’s a great addition that IPVanish explicitly states they don’t retain this.

In early 2018 there was some uproar over a historical criminal case dating back to 2016 in which a child sex offender was caught with the assistance of IPVanish. The company has since been acquired by another organisation and after the incident came to light recommitted themselves to their no-log policy.

IPVanish’s website claims to offer VPN servers in over 60 countries across the world and while this used to be true, it is no longer the case.

A quick count of countries actually offered and it sits more around the 47 VPN locations mark. While this isn’t a small number in itself and covers almost all major regions, it’s sad to see that IPVanish has dropped over 10 countries over the last few years.

Possibly they were underutilised or unnecessary and if you don’t require access to those countries then it won’t be a big loss. However, if you relied on one that has gone then it’ll put the service at a huge disadvantage for you.

That said, most typical users will only ever connect to around 1 – 3 different locations in their entire VPN lifetime so with nearly 50 available, it’s still a decent number.

The service has added more individual VPN servers in those locations now offering over 1,100 VPN servers which is great to see. Add this to the more than 40,000 IP Addresses and they’re still one of the larger networks.

IPVanish recently increased their concurrent connection limit from 5 last year to 10 this year.

That means you can connect up to 10 devices at the same time with just one account.

This is one of the biggest limits available and most other VPN services are still only offering between 3 – 6. If you’ve got a large family or plenty of internet-connected devices then this will definitely be a huge advantage and a cost saver too.

IPVanish has essentially future-proofed their service for IoT devices as everything becomes more connected.

One of the standout features IPVanish introduced this year is Live Help.

Previously, support was only available via ticket and although a response was always swift it could often take a few hours to get a reply. This is now no longer the case as if you hop onto the IPVanish website you can jump straight into a live chat and get the answer to your questions.

It’s something we’ve been calling out for for years at IPVanish and it’s impressive they’ve finally introduced this sought after feature.

Unfortunately for streaming fiends, the IPVanish service has become somewhat of a lame duck. Popular services such as BBC iPlayer and Netflix don’t work when connected to their service.

In fact, in our tests, we weren’t even able to access the Netflix website at all when connected to IPVanish’s ‘Best Server’ in the United States. If you’re a streaming fan and want to unblock content then best stick to a service that works such as ExpressVPN or NordVPN.

IPVanish offers apps for all the most popular mobile devices running either Android or Apple iOS.

We’ve been testing the Android version of their app over the past few weeks.

The layout of the app looks similar to that of their desktop clients and apps for other platforms so using across a range of devices is simple. If you’re a beginner you’ll appreciate not needing to learn a new layout.

Connection and server selection can be done from the main app screen which is a really neat feature if you simply want to connect and forget about the VPN. 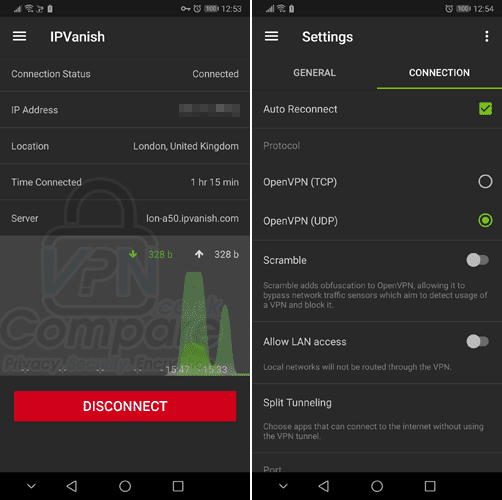 Behind the scenes, there aren’t too many options. Mostly they concern choosing between the TCP and UDP protocol and setting the app up for automatic connection if needed.

We really liked the new ‘Split Tunnelling’ option that allows you to select apps that fall outside of the VPN connection.

If you wanted the entire connection to use the VPN but simply have your banking app use your regular Wi-Fi or mobile data connection then this is possible. It’s an extremely smart feature and a huge bonus to the app.

Overall the mobile apps are easy to use and have one or two interesting features. They aren’t the most feature-rich apps out there but for quick mobile security they’ve got the right balance between ease of use and options.

They’re essentially the same as we used last year and as far as we could tell there are no new additions or features.

The desktop apps function well and connection along with city and specific server selection can all be done from the main screen. If you need a little more in the way of server selection then behind the scenes you get both a Map, List and Filter view to help you find the right server.

There’s a wealth of options in the ‘Settings’ area which includes all the essential requirements such as IPv6 Leak Protection, DNS Leak Protection, a Kill Switch, Protocol and Port selection and the option to obfuscate OpenVPN traffic.

It’s nice to be able to connect and disconnect on every page of the app so whether you’re in the Settings area or browsing your Account Information you can connect or disconnect at will.

Overall the desktop apps are very well rounded and include all the essential features you will need. They may not be the best visually but they’re highly functional.

Having an Amazon app is a huge advantage because it allows you to protect your privacy while streaming on your TV. If you’re a big Kodi user then you’ll really appreciate the protection.

In terms of unblocking content IPVanish is unfortunately quite poor so if you want to unblock services like Netflix or BBC iPlayer then you’re out of luck.

They do work with some services such as ITV Hub, TV Player and one or two others across the world but your luck may vary and we wouldn’t recommend them as a dedicated service for unblocking content.

IPVanish has been consistently one of the fastest VPN services over the years even when faced with tough competition.

In testing their service over a number of weeks we found no issues when browsing the web, sending emails or streaming high-quality video from services such as YouTube and others.

For regular use there was no noticeable slowdown or issues that we could detect.

You may be interested how this translates into actual speeds so we ran some speed tests to find out.

Using a regular UK residential internet connection we tested a range of servers at random on a Windows PC using OpenVPN 256-bit. Our speed achieved without using a VPN was: 62.94 Mbps.

When connecting to IPVanish’s servers in no particular order we achieved the following speeds:

IPVanish’s speed results are some of the best we’ve seen this year and their impressive speeds across their entire worldwide network will be suitable for almost all uses.

IPVanish has used industry standard strong encryption across their service for a number of years.

Concentrating mainly on their OpenVPN protocol very little has changed since we last reviewed their service and it still makes use of AES 256-bit encryption (more specifically AES-256-GCM).

IKEv2 also makes use of AES 256-bit encryption which is at the upper end of the scale and one of the most recommended encryption standards currently.

This policy looks sound and has been recently updated to comply with European Union GDPR.

Whilst we can’t see anything that would worry us, it’s worth casting your eye over their policies before signing up to ensure you agree with all their terms.

IPVanish has been one of our favourite VPN services in recent years and in our latest test we’ve found them to still offer the robust and reliable service we’ve come to expect.

This year they introduced both Live Help and increased their concurrently connected device limit to 10 devices.

We are a little disappointed to see an overall reduction in server locations across the world. However, with an increase in individual servers in their remaining locations it has introduced a hefty speed boost.

Upon testing the service both for everyday use and in specific speed tests we found IPVanish to be one of the fastest services available. If you like to stream high quality video, download quickly or carry out other speed-intensive tasks then IPVanish will certainly be suitable.

We’re really disappointed to see that many of the most popular streaming services such as Netflix and BBC iPlayer don’t work when connected to the service. While some others do, they’re not reliable enough for us to recommend them if you’re a big streamer.

Encryption on the service is high and with apps for most major devices that have many of the options you’ll require, IPVanish continues to offer a secure service suitable for protecting your privacy.

Overall we still really like IPVanish and if you’re after protecting your privacy they’re high up on the list of services suitable for the job. Now if they could only unblock a few of the major TV services and they really would be vying for the top spot as the best VPN service.

Exclusive: Get up to 57% off for VPN Compare readers

Other articles you may enjoy