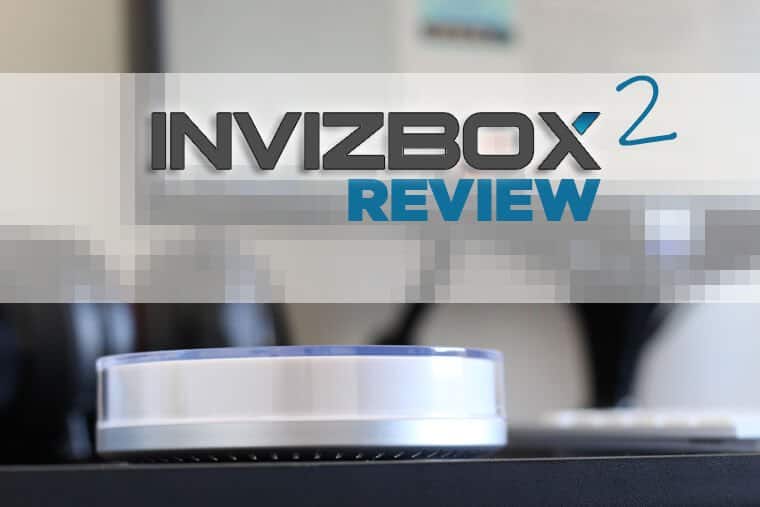 The InvizBox 2 has hit the market and I've been taking a look at this small but powerful VPN router.

InvizBox is a name that might sound familiar because for the last couple of years, they've been innovating in the online-security hardware sector.

Previous products include the original InvizBox, a tiny hardware Tor router back in 2015. They then followed this up with the rather more useful InvizBox Go late in 2016, a portable device allowing users to protect their Wi-Fi connections via either VPN or Tor.

Now they're back with an even more advanced product, named simply the ‘InvizBox 2‘.

The first two products received widespread praise, but is it a case of third time lucky with the InvizBox 2? I've been testing it over the past few weeks to find out.

What's inside the box?

The InvizBox 2 comes in a small security sealed box.

As with all InvizBox's previous products, this is to prevent tampering while the device wings its way through the postal system. It's impossible to tamper with this security seal without it being obvious. 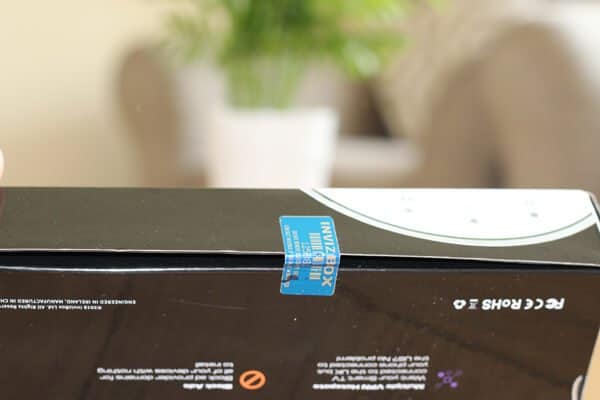 It's also an ‘InvizBox' specific security seal so it couldn't be replaced with a generic one without you knowing.

Inside the box you get: 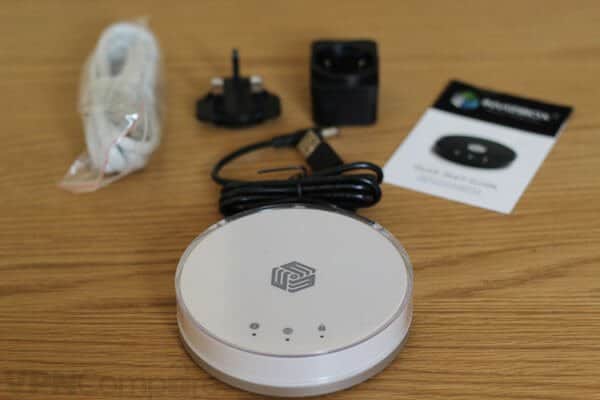 I also received a bonus InvizBox branded ‘Webcam Cover' which was a surprise addition.

Unlike regular routers, the InvizBox 2 is of circular design not much larger than the palm of your hand.

Adorning the top of the device nestled neatly below the InvizBox logo are three LED lights signalling ‘Information‘, ‘Internet Connection‘ and ‘Protection‘.

These lights are bright green when everything is functioning correctly and easily seen.

However, depending on where you plan to house the device they would be too bright in a bedroom if trying to sleep, for example (I'm assured an option to limit these will be introduced shortly).

The back of the InvizBox sports five ports. A USB port, reset hole, LAN port, WAN port and a power port. 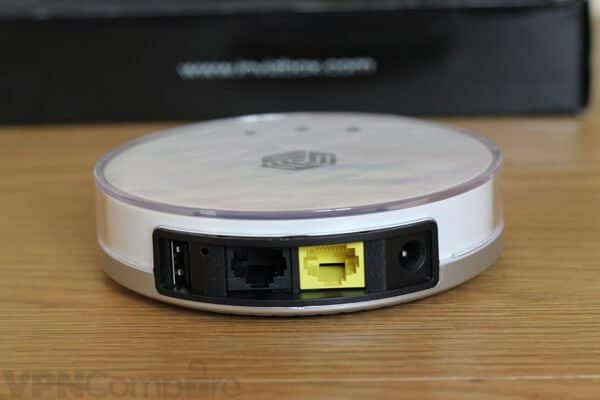 The underneath features a rubber style strip which runs the entire length of the base making it non-scratch and non-slip whatever surface you plan to place it on.

Coupled with the silver effect base and air vents, the modern design won't look out of place in any setting home or office. 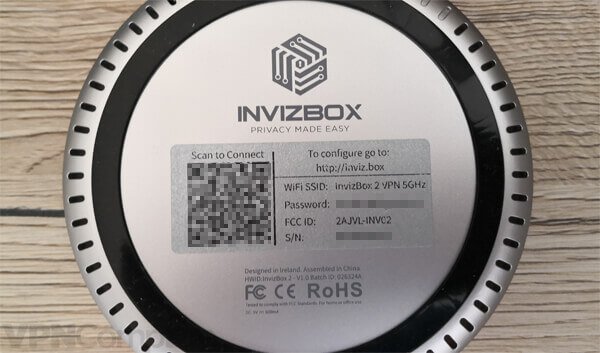 The InvizBox 2 is a dual-band router which allows use over either 2.4Ghz or 5Ghz bands.

You also have the useful option of using it via a wired connection. Although this is limited to one port when you see the small structure of the device, you'll understand why.

Having any wired connection is a bonus, and if you want to squeeze maximum speed out of your internet connection, then you'll appreciate this now often overlooked feature.

Under the hood is a quad-core processor which is currently intelligently divided between the number of connections you create, but more on hotspots later.

Physically the device itself runs very cool. Unlike its portable predecessor there are a bunch of air vents on the underside of the device keeping things cool – no fear of marks or heat damage whatever surface you place it on.

My standard internet connection set-up to a desktop computer via 5Ghz Wi-Fi usually yields download speeds of 59 Mbps with 14 Mbps upload on a 67/20 Mbps connection through a thin partition wall.

This is without using a VPN, just a regular connection.

The InvizBox 2 while connected to a UK VPN server provided a very respectable 37 Mbps download speed and 12 Mbps upload, plenty enough for 4k streaming and some. 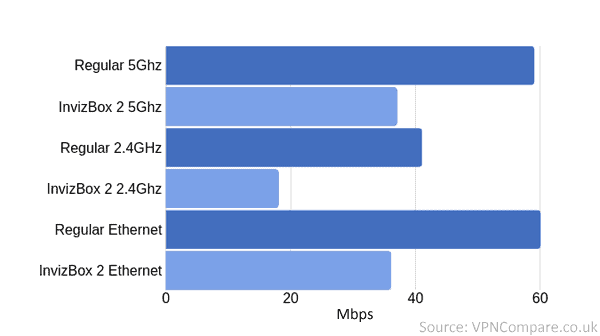 Speed is always subjective to hundreds of factors, and you may achieve better or worse.

What is however clear is the InvizBox 2 is providing fast speeds that are suitable for a multitude of purposes at a very reasonable price point.

After a couple of weeks of usage of the InvizBox 2, I found no issues carrying out daily tasks or doing more speed intensive activities. Streaming video using a mixture of UK, Netherlands and US hotspots worked perfectly.

Staying connected permanently to keep secure is certainly possible and has been my continued usage since receiving the device.

The InvixBox 2 moved to utilising the Windscribe service in October 2019.

Currently, you have the option of purchasing the device including a subscription direct from InvizBox (powered by Windscribe). You're also able to buy a ‘subscription-free' device that supports ExpressVPN, NordVPN, IPVanish, PrivateInternetAccess or Windscribe allowing you to use a subscription you already have or intend to purchase separately.

One of the benefits of taking the included subscription is Windscribe has no record of you as a customer even though you're technically utilising their service.

With your billing with InvizBox in Ireland (part of the EU) and your service provided by a Canadian company, you're adding a jurisdiction layer between service and billing records.

Being covered by the Windscribe network means you're secured by 256-bit encryption using shared IP Addresses. They are also a log-free VPN service meaning there is no record of your usage.

You also won't be restricted by any concurrently connected device limits that plague app-based VPN solutions.

Offering the ability to use a range of the leading VPN services has really opened the device up and hugely increased its usability and potential.

Alongside privacy protection is the ability to create different hotspots opening up the possibility of having dedicated Wi-Fi connections for different countries.

For example, you can create a US Hotspot to allow you to unblock US Netflix on any device that connects to it. This extends to the UK, Canada, Australia or any of the other countries available.

Since InvizBox moved to partner with Windscribe it has dramatically opened up the device to streaming with all the most popular services supported.

Netflix, BBC iPlayer, ITV Hub and a whole host of other services are now accessible. There are even streaming specific servers for the US, UK, Canada and Japan.

Setup is one area where the InvizBox 2 shines. It is essentially a plug-in-and-play device.

Even if you're not a tech-savvy user, you could connect the minimum two cables and use it as is.

Merely connecting the power cable to a power socket and the supplied ethernet cable from the InvizBox 2 to one of your usual router ‘LAN' ports is all that is needed. Of course, for most people, you'll want to configure it a little more, but that's also been made as straightforward as possible.

Initially, from connecting the device, a new InvizBox 2 hotspot will be created. Connect to this using the password given on the underside of the casing.

Access is currently done via a web-based control panel although a standalone app is in the works that will allow you to administer directly from your phone or tablet.

The admin interface is split into four categories, ‘Networks‘, ‘Profiles‘, ‘Devices‘ and ‘System‘. 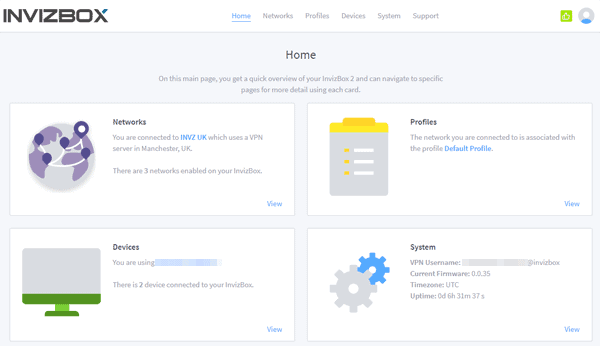 Most of the action happens in Networks.

The ‘Networks' category is where you can set up new Wi-Fi hotspots and configure the type of connection the wired port uses.

You have four choices for each hotspot you create, ‘VPN‘, ‘Clear‘, ‘Tor‘ or ‘Local‘. The most useful being ‘VPN' of which you can create up to 4 VPN hotspots.

This is where it gets interesting and you can configure each hotspot to be connected to a different VPN server located in some 60 countries or set them up as a ‘Tor', ‘Clear' or ‘Local' hotspot too. 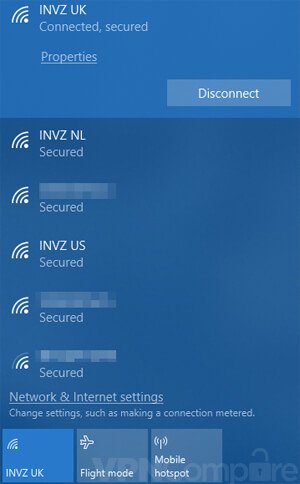 You also have a range of options for each hotspot, including setting individual names and passwords, choosing the Wi-Fi band and utilising WPA2 encryption or not.

You can even choose specific VPN servers or set it to connect to one in your chosen country randomly.

This feature alone is what sets the device apart. It's the one I found most useful for carrying out a variety of tasks without the hassle of disconnecting and reconnecting as you would with a software-based VPN app.

Couple this with the fact you can now secure devices that don't inherently support VPN, and the benefits start to become apparent.

There are multiple uses for this but to give you an example you could unblock US Netflix (outside the US) on the Netflix app on your internet-enabled TV that wouldn't ordinarily be possible.

The ‘Profiles' set-up allows some control over your network. Here you can create different access rules.

This will be especially handy if you've got kids and want to control the times of access or you want to block access to specific sites or types of websites.

Predefined sections allow you to block:

While we never advocate enabling these types of options without continuing to monitor your kid's internet usage manually, they do provide additional peace of mind. 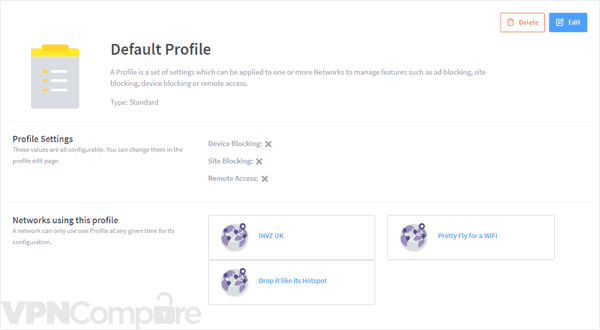 As well as being able to assign profiles to specific hotspots, you can also assign them to particular devices.

Even though the InvizBox 2 is out to buy now, there are several exciting developments just around the corner, a couple that standout includes:

Home VPN server, essentially a way of running a VPN server on the InvizBox itself, this would allow you to ‘dial home' in a sense and utilise your home connection. This will revolutionise travelling and streaming. No more blocked Netflix servers and services accessible by residential IP only would be a thing of the past.

Mobile admin app, will enable the ability to control your network through an Android or iOS app, allowing quick configuration.

Inter-network communication, access all of your devices on different networks if required.

After toying with the device for the best part of a month, I've become a massive fan. Unlike a lot of hardware products, it's taken pride of place in my office and is something I will continue to use regularly.

VPN apps themselves require a bit of manual interaction – that is, remembering to run them and connect. The InvizBox 2 does away with all this.

All of your devices from your regular computer to your phone, tablet and even TV devices are now covered with no interaction required. Just as with a regular Wi-Fi hotspot, you can connect and forget about it.

There are many different uses for the InvizBox 2, and it's at a price point that is fair for what you're getting. 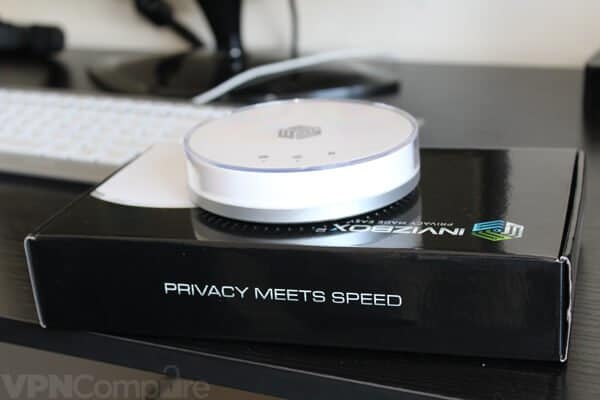 Moving from utilising the IPVanish network to Windscribe plus allowing you to use the device with other top VPN services has opened up the device massively. It's now perfect for streaming which makes it that much more useful if you like accessing content from other countries.

If you're after fast house or small office-wide privacy protection with minimal fuss and set-up & configuration so easy even your grandmother could do it then stick an InvizBox 2 on your shopping list.

The InvizBox 2 isn't just a game-changer – it's actually created a whole new game for others to catch-up to – highly recommended!

Disclosure: VPNCompare received the InvizBox 2 free for testing. We receive no compensation should you choose to purchase.

The InvizBox 2 brings VPN technology to the masses in an easy-to-use plug-in and play device suitable for home or office. An industry game changing router that covers every device you own.