IKEv2 vs. OpenVPN – Which should I use? 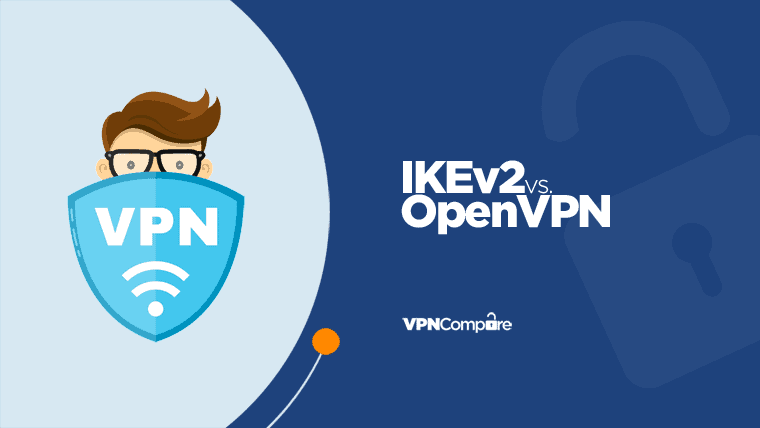 Virtual Private Network (VPN) providers have grown to become some of the leading companies in online privacy and security.

Names like ExpressVPN and NordVPN are now as commonplace as Norton, McAfee and Kaspersky.

However, it is essential to remember that VPN services consist of an entire array of smaller tools, features, technologies, and more.

Let's take security protocols as an example – there are many different ones.

Most VPNs allow you to switch between several of them freely, although for the time being OpenVPN and IKEv2 are often thought to be the best.

However, you'll be hearing of ‘Wireguard' more in the coming months and years ahead.

Choosing which protocol to use can be confusing and with conflicting advice, it's hard to decide.

Below we're rounding up the positives and negatives to help you make a decision.

OpenVPN is considered to be one of the best and most popular VPN protocols recommended by experts around the world. It is highly secure and versatile, which makes it the current default protocol across the entire VPN industry.

It relies on open-source technologies, such as the OpenSSL encryption library, hence the name, OpenVPN.

One reason why OpenVPN is so effective is the fact that it can shield the user who engages in any online activity, and it does it in plain sight.

As it's not a proprietary protocol, it's available on almost all platforms which makes it suitable for use on everything from your desktop to your mobile phone.

How does OpenVPN work?

OpenVPN works by masking your data and disguising it using what is known as encryption.

What this means is that it is difficult for someone to tell if you're using a secure website (any using HTTPS) or using a VPN connection. This makes it more difficult to block than other VPN protocols that will only operate on certain networks or ports.

Furthermore, the protocol can operate on pretty much any port while using TCP or UDP protocols.

This can help users bypass firewalls, which can be useful in many different ways. Apart from being useful to regular users, OpenVPN is also beneficial to companies.

IVPN points out that their additional ‘Multihop' and port-forwarding features are only available when using OpenVPN.

One thing to note is that OpenVPN still requires a third-party app, as it is not built-in to most platforms. This will usually come via a dedicated app from your VPN provider, but can also be run standalone if you prefer a manual setup.

As we have seen, OpenVPN has plenty of benefits, while only a handful of real disadvantages. In the end, the benefits are much more significant in number, and they include:

As for its few disadvantages, we have:

On the other hand, we have IKEv2, which is another security protocol, this time a product of the IETF IPsec Working Group.

As such, IKEv2 operates as a true protocol, and you can find it accessible via certain platforms built-in.

One of its significant advantages is the fact that it works on platforms that are not that commonly used, such as Linux, or BlackBerry. Most other protocols tend to stick to macOS and Windows, without bothering to be compatible with other platforms.

This is what makes IKEv2 very popular, in addition to the fact that it is a good option when it comes to security.

How does IKEv2 work?

As we have seen, IKEv2 is an excellent choice for when you need a protocol that can quickly adapt.

Its connection can remain reliable and consistent in various networks, which is another big benefit that comes from using it. What this means is that you can keep your VPN connection stable, even if you're using an unreliable internet connection.

In many other instances, the connection would be severed to prevent data leaks.

IKEv2 also meets user privacy demands, which is, of course, something that is necessary for most protocols in order to be considered useful and reliable.

It can work with pretty much any network thanks to its support for MOBIKE (IKEv2 Mobility and Multihoming).

You can read more about MOBIKE from the Internet Engineering Task Force.

In other words, if you leave your home or decide to switch from a Wi-Fi connection to a data connection, the protocol will handle the transition without ever losing the connection.

In summary, IKEv2 is reliable and sturdy, and its greatest strength lies in its adaptability.

With that in mind, here is what we can say about its pros:

As for its disadvantages, there are only a few real issues that we could detect.

These are not even real problems, but slightly lacking features. Even so, they are worth noting, as they can be deal-breakers for some users in certain situations.

OpenVPN and IKEv2 are both excellent security protocols for VPN that are capable of keeping you safe.

They are both fast, although they do focus on different things. OpenVPN is universally available, while IKEv2 focuses on being adaptive.

Both are reliable, however, and you can use them in combination with a wide range of encryptions, including the industry's strongest, 256-bit AES encryption.

OpenVPN is somewhat more challenging to set yourself up unless you're using your VPN provider's app.

While IKEv2 – which comes as a part of every Windows release since 7 is simpler to handle.

Other than that, both are strong, and they will serve you well. With that said, OpenVPN may be a better option if you are up against firewalls, as its technology makes it more competent when it comes to bypassing them.