Home » Entertainment » How to watch u.tv and utv.ie Player abroad 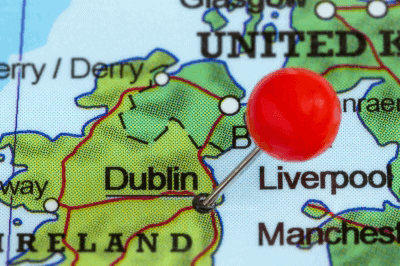 There are two different websites for UTV both dedicated to their specific area. U.TV is for viewers in Northern Ireland while UTV.IE is for viewers in the Republic of Ireland. While essentially the same service they're not accessible from the opposite location.

The plot thickens further when you realise that neither service are accessible outside either of their intended locations.

Citizens of both the Republic and Northern Ireland can be found all over the world either on a short holiday, as an ex-pat, travelling long term or away on business.

If you're one of them then watching TV programmes from your home nation can offer comfort and keep you up to date with the goings-on of your motherland.

Unfortunately, if you've tried to access U.TV or UTV.IE you'll be sure to have found out that a big block message stops you from watching TV programmes from back home. So you've no doubt come here to find out if there is a solution.

You'll be glad to know there is a solution that will allow you to watch either U.TV or UTV.IE from any country in the world and with this solution you can even alternate between the two services if you wanted to.

While both sites are essentially the same there are some differences in some of the programmes so it's worth taking a look at both services.

When you head on over to either site the first thing it does is check what country you're in. If you're in the Republic of Ireland then UTV.IE lets you through, if you're in Northern Ireland or anywhere else in the UK then U.TV will play no problem.

However, if you're in neither then the services both block you.

Every internet connection is assigned a unique identifier similar to that of your phone number. This is known as an IP Address and the purpose of it is so services you access know who is requesting them and where to send all the bits of data.

Although IP Addresses don't have area codes like phone numbers they are generally assigned by regions and often they'll be able to pinpoint you to an area of a country although at the very least they can determine your country.

The answer to watching either U.TV or UTV.IE is to get yourselves a UK or Irish IP Address while you're outside the country. Read on to find out how that's possible.

How to get a UK or Irish IP Address

To get either an Irish IP Address or UK one then you need to sign up for a service called a Virtual Private Network or VPN for short. A VPN is a tiny program for your computer, laptop or tablet and allows you to pretend you're in another country.

With a VPN rather than being blocked from watching U.TV or UTV.IE you'll be able to watch any programme regardless of what country you're in anywhere in the world.

You're probably wondering where to get a VPN.

To watch U.TV or UTV.IE you'll need a VPN service that is fast because video requires a lot of speed and so picking the wrong VPN provider can leave you frustrated because of buffering.

The following three VPN providers are my recommendation as the best for watching U.TV outside Northern Ireland and UTV.IE outside the Republic of Ireland.

You should expect to pay between £4-£7 per month or 7-11€ for a VPN service. The longer you subscribe for the cheaper the price becomes and often if you take a 12-month service the price can drop as much as 50% compared to the monthly price.

So if you're an ex-pat or travelling outside either Northern Ireland or Eire for a long period of time and want access to either TV service then considering taking a longer subscription could be cost-effective.

Watching U.TV or UTV.IE from outside Ireland has never been easier.

All you need is a VPN such as ExpressVPN.

By using ExpressVPN, you'll be able to unblock any regional restrictions in place on U.TV or UTV.IE. Set yourself up with ExpressVPN now and enjoy all of your favourite content from back home.

Image courtesy of Tuomas_Lehtinen at FreeDigitalPhotos.net