Home » Guides » How to watch the League of Gentlemen abroad

How to watch the League of Gentlemen abroad 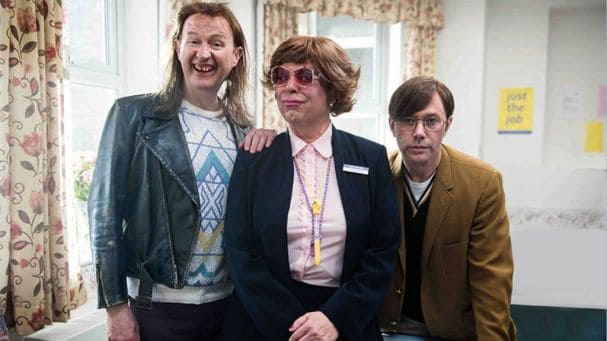 Yes, the League of Gentlemen is back with three special episodes which will air on the BBC over the Christmas period to mark the 20th anniversary of their first ever radio show.

But don’t worry if you are going to be overseas this yuletide as in this guide we are going to tell you everything you need to know to enjoy the all-new episodes of this landmark comedy, no matter where in the world you are!

Watch the League of Gentlemen on a mobile or tablet abroad

What’s all this shouting? We’ll have no trouble here!

If you are travelling overseas to visit loved ones or enjoy some Christmas sunshine, you may well only be taking a mobile device with you. No problem. It is quite straightforward to watch the League of Gentlemen on any mobile or tablet device no matter where you are. Just follow this simple guide:

Watch the League of Gentlemen on a computer or laptop abroad

We didn’t burn him!

If you are planning to take a laptop away with you, or are based overseas and like to stream on a computer, you can also use a VPN to stream the League of Gentlemen. Again, the process is quite straightforward:

Watch the League of Gentlemen on a Smart TV abroad

If you are living abroad and want to watch the new episodes of the League of Gentlemen on your Smart TV, there is good news for you too. It is even easier to stream the show on a Smart TV than through a computer or mobile device. You will, however, need a TV that can alter DNS Settings, such as a Samsung Smart TV, to do so.

Then sign up with StrongVPN. They have recently introduced a free Smart DNS service which will allow you to access content from overseas, such as the BBC iPlayer, with faster speeds than even the best VPN providers can offer.  You can learn more about StrongVPN by reading our full review of their service.

Watch the League of Gentlemen on a Fire TV Stick abroad

The Amazon Firestick is a popular tool for streaming online content overseas because of both its portability and flexibility. The BBC iPlayer app can also be downloaded onto the Firestick so all you will need to do is sign up for a VPN.

IPVanish is the best VPN provider for Firestick users as they offer a dedicated Amazon app. For more information about how to watch TV overseas on a Firestick, take a look at our Beginners Guide.

The dark, sinister, and hilariously funny residents on Royston Vasey are back on our screens as League of Gentlemen returns to the BBC this Christmas. The sitcom/sketch show started off as a radio show in 1999 before the BBC took it onto TV in 1999.

The series starred Reece Sheersmith, Mark Gattis, and Steve Pemberton, with Jeremy Dyson (the fourth member of the group) writing and directed but not appearing in front of the camera.

All of the League have gone on to success elsewhere, with Mark Gatiss working Steven Moffatt on such shows as Dr Who and Sherlock, while Pemberton and Sheersmith created the critically acclaimed Psychoville. But they have always said they wanted to do more League and now the time has come.

There will be a total of three new episodes, broadcasting on 18th, 19th, and 20th December on BBC Two. Details have been kept strictly under wraps, but one guest star, David Morrissey has been seen on set with the cast and leaked pictures show that popular characters Pauline Campbell-Jones, Ross, and Mickey will definitely be returning.

In an interview in 2016, Mark Gatiss hinted that Brexit might play some kind of background role in any new series. But there has been no confirmation of this, so fans will just have to tune in to see what they have put in the special stuff this time!