Home » Entertainment » How to watch Match of the Day online abroad

How to watch Match of the Day online abroad 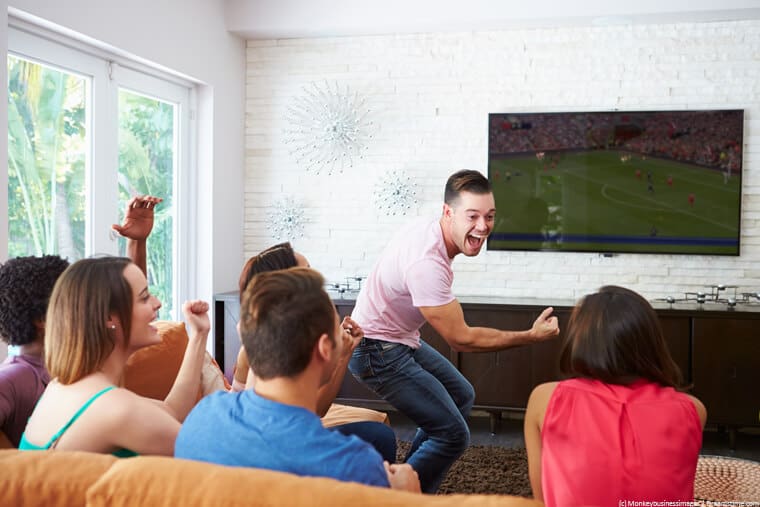 Match of the Day, who can deny this is one of the best TV channels to get the latest football results from the UK leagues.

In this guide, we're going to show you what to do if you want to watch Match of the Day, hosted by Gary Lineker, abroad from anywhere in the world.

The problem with Match of the Day is it isn't available outside the UK, due to the TV license issues.

So, if you're away on holiday, an expat or just travelling outside the UK for whatever reason, then you can't directly get your Match of the Day fix.

Thankfully for all you football fans (whether you're a Liverpool, Man City or any other team fan), there is a really simple solution called a Virtual Private Network (VPN).

With my recommended provider ExpressVPN – anyone can watch Match of the Day and Match of the Day 2 (MOTD 2) and pretty much anything that the BBC iPlayer has to offer, from any country in the world.

Stream Match of the Day abroad

If you want to watch Match of the Day online to keep up with the Premier League while abroad then you'll be disappointed. You'll see a huge block screen on BBC iPlayer telling you it isn't possible to watch.

However, there is a way for sports-loving viewers to bypass this BBC iPlayer block, called a VPN, and it requires no technical expertise.

With just an internet connection and a simple click, you can be watching Match of the Day and Match of the Day 2 on BBC iPlayer from anywhere in the world, like you are in the UK, and watch the Premier League abroad.

The same is true for other favourites, such as Sky Go-owned Now TV, or BT Sport. You can even use a VPN to access Amazon Prime Video, or any other websites, streaming service, and their programmes.

So let's say for example you're on holiday in Spain soaking up the sun. When you establish an internet connection, it lets BBC iPlayer know you're in Spain, as it reads your IP address and learns your location.

This will not do if you want to watch Match of the Day.

A VPN from a provider, such as ExpressVPN lets you disguise your IP address and change your online location. It will appear as if you're in the UK even though you're in Spain or anywhere in the world.

You need to select a VPN that has at least one UK server. Having a server in the right place is crucial, so remember that when choosing a VPN.

The best news is VPN services are totally legal in the UK because their intended purpose is to protect your online privacy. Of course, keep in mind that using it to access BBC iPlayer might be against their terms and conditions.

As a bonus with ExpressVPN, there's also a 30-day money-back guarantee so if you can't get it working you can just get your money back. If you're abroad for a while, then you can also save 49% off their regular price by taking a year subscription which comes with 3-months totally free.

You can watch on a Windows or Mac laptop or desktop and if you already have the BBC iPlayer app installed on your phone or tablet then you'll also be able to watch on your Android or iOS device.

Where to get a VPN for MOTD

VPN services are everywhere these days as people take a keen interest in protecting their privacy.

The problem is that some VPN services are good and others are bad. If you get a bad VPN service, it'll be too slow to watch Match of the Day. You won't be able to stream MOTD or Match of the Day 2 without annoying buffering and stuttering playback.

An even bigger problem is that the BBC iPlayer blocks VPNs and the IP addresses tied to VPN server in their country. So, you couldn't use them to access its content.

So, not only do you need to find a fast and reliable VPN, but also one that can unblock the BBC iPlayer and its TV shows.

We've tested the following three providers and all are suitable for unblocking any website, and watching Match of the Day and Match of the Day 2, especially in HD quality. However, due to the 30-day money-back guarantee and 3-months free on the year package we recommend ExpressVPN.

Just click one of the provider's names above to visit our recommended VPNs' website and then continue reading below where we'll show you how you can use the VPN to access the BBC iPlayer watch Match of the Day online abroad.

How to use the VPNs to watch MOTD

Now you've signed up to a good VPN provider, you'll want to know how to use it to watch Match of the Day anywhere. First, you will need to gain access to, and stream BBC iPlayer.

If you're already got BBC iPlayer installed on your Android or iOS device, then you can watch on that but if you don't already have it installed, you'll need to follow these instructions to download outside the UK.

If you're using a computer running Windows or Mac you won't need any additional apps other than the VPN app.

The ExpressVPN software will now make a connection to the UK.

This, in turn, disguises your spot so, to the website, you appear as if you are in the UK even though you're in Spain, France, the US, Canada, Australia, or another country of your choice, thus granting you access to UK's streaming services, including the BBC iPlayer.

Enjoy the full show and all the football highlights wherever you are in the world.