How to unblock Tumblr blogs 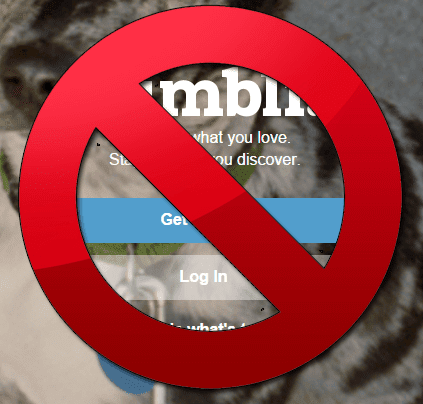 Finding information on how to unblock Tumblr blogs can be difficult. There are so many outdated articles and sketchy websites that claim to help you unblock Tumblr and with all the misinformation it can be confusing.

In this article, I'm going to show you the easiest method to unblock Tumblr blogs and one that you can be safe in the knowledge that the information you supply is secure and encrypted.

Tumblr may not be Facebook or Twitter in size but it's a social network that has a large and loyal following around the world and if you're a Tumblr fan then you know exactly the reasons why you prefer it or use it alongside the other “big” social networks.

Tumblr can be blocked for numerous reasons which can include being blocked on your school network, in a country that has a repressive internet regime or at the flick of a switch as recently found by Indonesian citizens when the site was censored countrywide.

So keep reading and I'll show you the easiest and most secure method on how to unblock Tumblr blogs.

How to unblock Tumblr blogs

If you've tried to access Tumblr and found it blocked or inaccessible then the best method to bypass this is to use a service called a Virtual Private Network (VPN).

If you're unlucky enough to find Tumblr blocked across your whole country such as Indonesia, China or others then you'll need to use a VPN to tunnel out of your country and access via another country.

The great news is VPN services are extremely easy to use and come as simple pieces of software for either your desktop or mobile device that take care of all the technical aspects.

Where to get a VPN to unblock Tumblr blogs

VPN services have become big business in recent years and the choice can be overwhelming at times.

Thankfully because of the number of VPN providers it's driven the costs down and kept them low.

If you're planning on needing to access Tumblr on a blocked network or in a blocked country for a long period then signing up for a 12 month VPN package will save you money in the long run.

It can be nearly 50% cheaper to get a yearly VPN account than a monthly one.

Quickly searching Google will present you with tons of options for VPN services and finding a good one in a sea of poor providers can be a minefield in itself.

To save you the hassle of spending hours digging through the mass of available options I've put together a list of the top 3 providers to unblock Tumblr blogs.

Once you've taken a look at the three suggested options then read on below to see how easy it is to unblock Tumblr blogs with your new VPN service.

How to use a VPN to unblock Tumblr

Now you've signed up for a VPN service you'll want to download either their software for your desktop or laptop system or their app for your mobile device.

As an example, I'm going to concentrate on desktops/laptops but the process is almost identical and even easier on an Android or iOS mobile device.

Once you've downloaded the software for either your PC or Mac you should consider what type of block you're trying to bypass.

If a Tumblr blog is blocked on your home network, a school or public network then you can connect to your own country via the VPN service.

If Tumblr is blocked nationwide such as like in countries like China, Indonesia etc. then you'll need to connect to another country.

Simply launch the VPN software, in this example, I'm using ExpressVPN, press Selected Location and then select either your own country or the closest country to you depending on what type of block you're bypassing.

All you need to do next is click one of the available options and press Connect.

After the software has connected you'll be able to access Tumblr and any Tumblr blog without being blocked or restricted.

If you want to unblock Tumblr Blogs in your country, then you'll need to use a VPN.

I highly recommend that you use ExpressVPN. Set yourself up now by following the Step-By-Step guide earlier in the article.