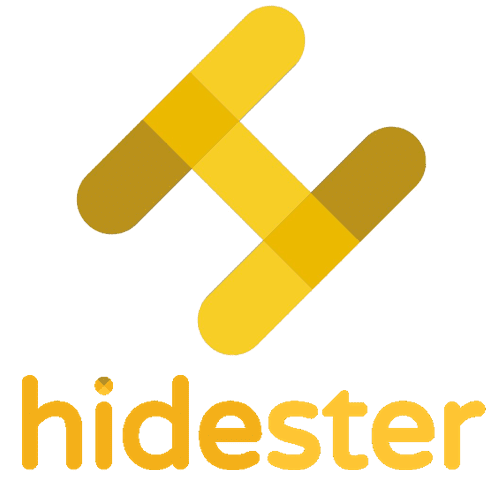 A new VPN with beautifully designed apps and a unique VPN protocol. Hidester VPN looks a promising addition to the VPN market. But there are several underlying issues that need to be addressed before it is challenging the best.

On the face of it, Hidester looks to be a great addition to the VPN market. The name won’t be to everyone’s taste, but their website and apps are slick and professional and they appear to tick all the boxes. So, let’s take a closer look at how Hidester VPN actually performs.

Hidester VPN offers users a choice of three subscription packages. You can sign up on a monthly, six-monthly, or annual basis, with their annual package offering the best value for money:

All of their packages are priced in the mid-range bracket. There are cheaper VPNs available, but Hidester is not the most expensive either.

Hidester accepts payments through all the usual credit cards, PayPal, and also various crypto coins, which is great for those users who are extremely privacy-conscious.

They also offer a money-back guarantee, although the length of this does vary depending on which package you sign up for. If you choose the 1 month or 6 month package, you have three days to try the service risk-free. If you opt for the annual package, this guarantee is extended to seven days.

Hidester VPN offers two principal VPN protocols and one web proxy service. They offer OpenVPN, which is the industry standard these days and is widely accepted as the VPN protocol which offers the best balance between security and performance

But Hidester also offers their own CamoVPN protocol. This protocol has been specially designed to help Hidester users get around web censorship and access blocked content in a country. This is the default protocol, so if you want to use OpenVPN, you will need to switch in the app.

There is also another option known as CamoWeb. This should not be confused with CamoVPN and is not actually a VPN protocol at all. Instead, Camoweb is a web proxy service which is useful if you want to stream content from geo-restricted sites but doesn’t encrypt your connection and so isn’t protecting your data or online privacy as much.

Hidester VPN clearly states that it has a no user logs policy all over their website. But this claim is a little misleading. Taking a look at their rather vague privacy policy, it becomes clear that Hidester does actually retain quite a bit of user metadata.

Put together, this is quite a bit of information and is far from ideal but doesn't link you to your activity. 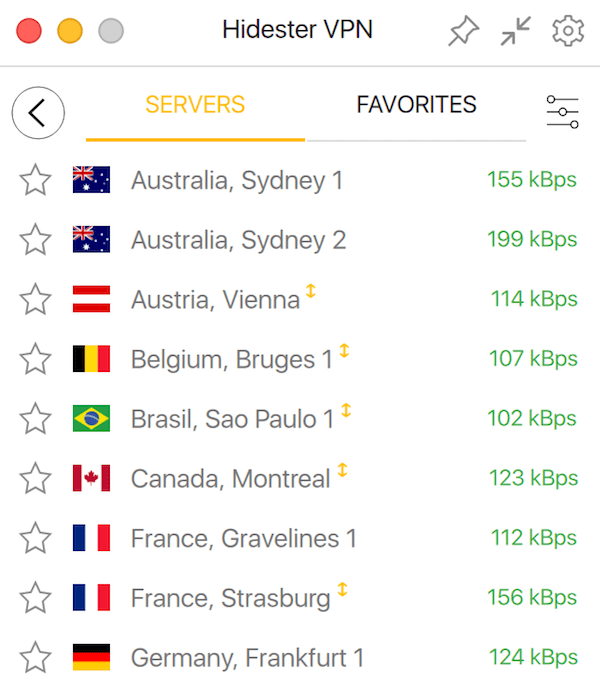 The Hidester server network has a good geographic spread but is not the largest on the market. They currently offer servers in 41 different locations. But with a total of just 45 servers available, this effectively means just one server per location in most cases.

Hidester’s website claims to offer servers in 35 different countries across 5 continents. However, in testing, their apps only had servers in 31 countries available. They also don’t reveal how many IP Addresses they have available either, which suggests the number may not be huge.

This small server network could undermine their flagship CamoVPN protocol though. If regimes like China do cotton onto Hidester, it wouldn’t be too hard to block their entire network of servers.

Every Hidester subscription allows users to connect up to five devices to their service simultaneously. This is pretty much the industry standard these days and is usually enough to protect all of your devices and could even be used for other family members too.

Aside from their CamoVPN protocol and CamoWeb web proxy service, Hidester doesn’t offer too many additional features.

They do have a built-in ‘What is My IP’ test as well as a DNS and WebRTC leak test. And there is also a VPN kill switch which ensures that if your VPN link goes down, no data will be leaked.

Hidester also has their own DNS servers which is great to see as it stops the URLs you're accessing from being exposed to your ISP or others.

Surprisingly Hidester works well for accessing American Netflix and I was able to watch via their Atlanta servers. Unfortunately though the UK, Australian and Thai Netflix flag up the proxy/unblocker error and so aren't accessible.

BBC iPlayer also doesn't work via either of the UK servers on offer. 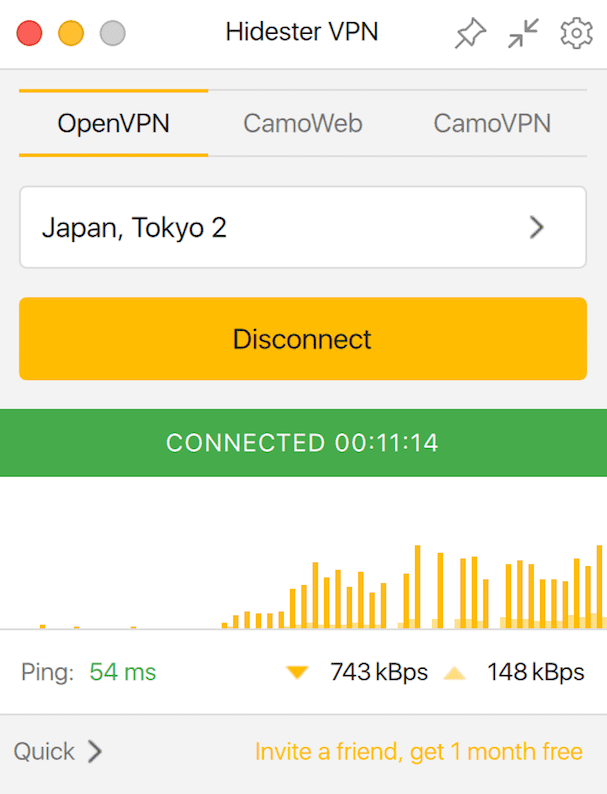 Hidester offers apps on all the major devices and operating systems including Windows, Mac, iOS, Android, and Linux.

We tested their service on both Mac and iOS devices and found these apps to be simple to download and set up. There is a helpful tutorial when they first open up, although the user-friendly design means it is short and sweet.

The apps themselves are among the very best designed we have come across. All of the main features are easily accessible and can be used with just a single click. Plenty of other VPNs could learn something from the Hidester design team.

One thing Hidester doesn’t offer at the moment is browser extensions, which is a shame. It also cannot be easily added to games consoles or other streaming devices at the moment either. But to fair, they are still a fairly young company, and these may well be added in time.

When it comes to connection speeds, Hidester can best be described as solid but unspectacular.

We tested Hidester from both Europe and Asia and ran the service on both their iOS, Mac and Windows apps. On all devices, the speeds proved to be both consistent and reliable on all the servers we tested. However, given that their server network is not huge, this is no surprise.

Tests from the UK using a Wi-Fi connection showed the following results with a none-VPN speed of 47.62 Mbps :

We found speeds adequate for most regular online tasks, including streaming HD video content. However, ping tests were not great, which suggests that Hidester may not be fast enough for online gamers and if you torrent a lot then you may find yourself hindered.

Hidester offers 256-bit AES encryption as standard to all users regardless of which subscription package you choose. This is also available on both their OpenVPN and CamoVPN protocols too.

This is the industry standard level of encryption and more than sufficient for most users. It couldn’t be described as military-grade and there are a few providers which can beat it, but Hidester is definitely on a par with most of the VPN market right now.

The Hidester privacy policy is extremely short and leaves out quite a lot of information. We have already mentioned above that, despite claiming to keep no user logs, Hidester does actually retain quite a bit of metadata.

The privacy policy makes no mention of details such as how long this metadata is retained. It also makes a reference to ‘diagnosis data’ which it admits to sharing with a ‘third party analytics provider’. There is no detail on what this data is or who the third party is, which is rather troubling.

The company behind Hidester is incorporated in Hong Kong, which does not have a data retention law as such. However, Hong Kong is now a special administrative region of Communist China, which has the world’s most extreme online surveillance regime.

It is not clear how much this surveillance regime has reached into Hong Kong yet, but Hidester users should be aware of the potential risks. On the other hand, many VPN companies choose to incorporate here so it's up to you to see the potential benefits or pitfalls of their location.

Hidester is a relatively new VPN and as such we shouldn’t expect too much too soon from them. They have actually got quite a bit right. Their encryption is strong and the protocols and proxy service they offer all function well.

Subscription prices are reasonable, and their money-back guarantee is welcome. Particular praise should be reserved for their excellent apps too, and the spread of servers is also pretty impressive for a young VPN.

But there are some question marks about their service too. Connection speeds are OK but could be improved upon. The small number of servers and IP Address is not ideal for many users either.

Most concerning is their privacy policy, which is extremely short and unclear. Hidester does retain metadata, does hand an unspecified amount of information to a third-party, and doesn’t say how long it retains any of this data for. None of this is encouraging.

As such, while Hidester is a decent VPN, they have some way to go before they are a serious threat to the market leaders. And privacy-conscious users, in particular, should think twice before signing up.

Have you used Hidester? I would love to know your thoughts about how they performed for you. Do you think they'll become one of the big names in the industry or will they sit on the outskirts?