HMA is one of the most recognizable VPNs around, but there are far too many issues with their service for such a well-established provider.

HideMyAss (HMA) has been around for years and their donkey logo is one of the most recognisable in the industry.

But their service has been patchy for a long time and as you will see in this review, things are not getting any better and might even be getting worse.

HMA offers a choice of a monthly, annual, and bi-annual subscription package which is increasingly becoming the norm. There are, as always, big savings to be made if you sign up for longer. The current package prices are: 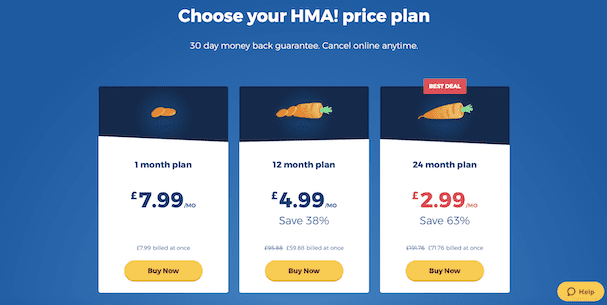 These prices are on par with the market average but there are cheaper services out there.

There is a 30-day money-back guarantee available to all users which is excellent although there have been some reports of HMA being reluctant to pay up.

They accept payment by a variety of different methods including the usual credit and debit cards, PayPal, UnionPay, Skrill Wallet, and Neteller.

Unfortunately, anonymous payment by BitCoin is not currently an option.

HMA offers OpenVPN as its standard protocol to all users. OpenVPN is the most secure and reliable VPN protocol so this is just fine.

PPTP and L2TP/IPSec protocols are also available but only if you choose to download version 2 of their software rather than version 4. Version 4 is the default download these days and only uses OpenVPN.

For most users, this will be fine, but for those who might want to switch it is an unnecessary inconvenience.

HMA claims that it does not log details of the websites you visit when using their VPN service.

But they do log plenty of other things including your IP Address, the time you connect and disconnect from the service, the amount of data you download and upload, the IP Address of the servers you use, and various other details about your app usage.

This is a lot of information and makes any claim that HMA is serious about protecting your online privacy look seriously questionable.

HMA’s server network is, on the face of it, very impressive.

They offer more than 930 servers in 280 different locations and 190 countries around the world. These are spread across six continents and cover just about every country you can think of. 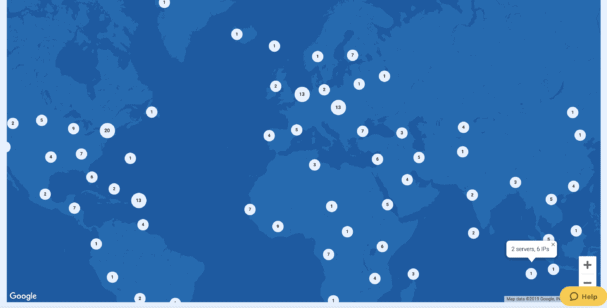 This includes places like Greenland, North Korea, and Iran which does raise a few questions.

The fact is that the majority of HMA’s servers are not physical servers. They are a prolific user of virtual servers, which are located in one country but spoof the location of another.

Virtual servers can be useful to access the internet of countries like Iran and China, but they can also offer poor performance and also affect speeds in the country where they are actually located too.

As HMA is yet to confirm how many of its servers are virtual and where they are located, there is a chance their use could affect the entire HMA network.

All HMA subscribers are allowed to connect up to five devices to the HMA network simultaneously. This is a recent improvement as previously HMA only offered two concurrent connections.

This is pretty standard for most VPNs these days, but with other providers going as high as ten or even twelve concurrent connections it is something that HMA might want to review sooner rather than later.

TIP: Get up to 10 simultaneous connections with IPVanish.

HMA offers a number of additional privacy tools alongside their core service. These include an IP Checker which can tell you what people can find out about your IP Address.

There is also a DNS leak test, a WebRTC leak test, and a limited free web proxy service available to all users too.

These are always nice to see and not available on every VPN, although HMA is not the only ones to offer them.

However, we would prefer HMA to enhance its core privacy policy rather than try and compensate for failings in that area with extra features.

Surprisingly, HideMyAss now works with all the most popular streaming services which wasn’t the case when we have tested them in the past.

Both US and UK Netflix work fine when using the dedicated ‘Streaming’ servers available from within the HMA apps.

HMA offers mobile apps for iOS and Android devices. We tested out their service on an Apple iPhone XR device using the latest version of their iOS app.

There is no doubting that HMA has dramatically improved their mobile app, which is now one of the best designed and most user-friendly we have come across.

Once you log in, the app homepage offers a simple blue screen with three options. Instant Mode allows you to connect to the fastest available server with a single click.

Location Mode lets you choose which server to connect to, and Freedom Mode enables you to connect to the nearest server in a country without online censorship and surveillance.

In the top left of the screen is a settings menu which includes options to manage your account setting, access HMA support, and view a limited number of settings.

The app is slick, easy-to-use and looks great – a significant improvement on their previous versions.

The HMA desktop apps are available for Windows, Mac, and Linux devices and have been restyled in much the same way as their mobile apps.

There is no access to settings or account details through the desktop app which is slightly annoying as it means you need to log into your account through your desktop browser to make any changes to these.

Having these basic settings available through the app would be nice.

But aside from the that, the HMA desktop app looks great, is simple to use, and does the basics very well indeed.

HMA is currently only available on the desktop and mobile operating systems mentioned above.

It can also be manually set up on some VPN-enabled routers. If you want to use a VPN with devices like the Amazon Fire TV or Smart TVs, you will have to look elsewhere.

Over the years HideMyAss hasn’t been known for its speeds.

We’ve been pretty underwhelmed yearly when we sit down to review their service.

This year surprised us a little because the speeds have seen a dramatic improvement. However, this isn’t without a caveat.

That is HideMyAss’ use of ‘Virtual Servers’.

As we discussed earlier these are connection points that aren’t physically located in the country you’re connecting to. You could, in theory, connect to Vietnam but the actual server may be in Singapore.

We ran some speed tests but without further investigation which is outside the scope of this review, we can’t say for certain that in every case the physical location of the server matched the location of where we connected to.

We tested their service on a UK residential internet connection to mirror the likely connection type you would be using.

Our connection speed without VPN was: 60.57 Mbps.

The following are a selection of results when connected to HideMyAss:

The speeds achieved certainly aren’t the fastest we’ve encountered but they’re not too far off the mark.

They’re certainly a marked improvement over previous years. However, with the caveat that we can’t guarantee all servers were physically located where they’re suggesting they are.

Please note speed tests are not 100% reliable. They are merely a glimpse of performance at a certain period. Your results may differ depending on your location, time of usage, services accessed, device used and many other factors.

In our last review, we reported that HMA’s OpenVPN protocol used 256-bit AES encryption as standard. This is no longer the case.

They have confirmed that they offer 128-bit encryption on all OpenVPN connections. To get 256-bit encryption with HMA, you will need to use the L2TP/IPSec protocol which you can set up manually.

We are not sure whether this is a conscious decision to downgrade the strength of their encryption or not, but it certainly means the level of security offered by HMA is some way short of the standard available on most of their peers.

The biggest concern with HMA’s privacy policies is their logging practices which we have outlined above. Essentially, HMA logs far too much information about its users to be able to justifiably claim it can protect their privacy.

HMA’s base is in one of the five eyes countries, specifically the UK. This means it is subject to the UK’s domestic law which is among the most intrusive in the free world.

HMA has a track record of complying with local law enforcement and if asked, they will hand all these private details over to the authorities.

TIP: Check out our Best Logless VPN selection for a more secure service.

In the past they have also been known to suspend accounts they deem in breach of the law and actively discourage users from downloading BitTorrent files. However, they do now seem to have “P2P” tagged servers which could signal an easing on this policy.

In short, if you are using a VPN to try and keep your online activity private, HMA is not the VPN for you.

There are some positives about Hide My Ass VPN, but also far too many negatives for our liking.

They’ve also shown improvements in speed and work with popular services like BBC iPlayer and Netflix.

But their privacy policy is desperately poor, they log far too much information, their encryption is weaker than most of their competitors and they use virtual servers.

Unfortunately, at the moment, the negatives outweigh the positives with HMA and for the price they charge, there are no shortage of better VPNs out there for you to choose.