A Netherlands-based VPN with a lot of potential but also areas for improvement too.

Goose VPN is a fresh VPN which makes big claims about what it can do. But does the reality live up to the hype?

We have been putting this oddly-named virtual private network service through its paces to find out.

We tested Goose VPN from various locations and internet connections across the UK. We used a variety of servers, in the UK, Europe, and as far away as Japan and the USA.

All VPNs have a slight impact on speeds when using servers located a long way away, but with Goose VPN this was negligible.

We did find there was a slight impact on download speeds, but when streaming HD video or online gaming, there was no noticeable difference.

To put the service through its paces, we ran speed tests.

Without connecting to the VPN, our standard UK-based connection yielded a download speed of: 61.92 Mbps

Using a selection of Goose VPN servers, we achieved the following speeds:

With the exception of the Swedish server, speeds were rather good.

However, we have had better speeds even at a distance using Australian-based servers from other providers such as ExpressVPN.

Mandee Rose of ProPrivacy noted quite disappointing speed results saying “overall this was a lackluster performance in a critical area” [1]. However, this was back in 2018 and improvements have clearly been made since.

The UK server as an example saw a reduction of just under 10% in speed from our regular connection. Other providers have seen similar drops but some have produced better results.

Note: Please note speed tests are not 100% reliable. They are merely a glimpse of performance at a certain period. Your results may differ depending on your location, time of usage, services accessed, device used, if the Goose is laying eggs and many other factors.

The Goose VPN privacy policy is a long one and it is not an easy read, especially if you're not versed in relevant legal and technical terminology.

But scour through it and you will find a cast-iron promise that Goose VPN does not keep any logs of users internet activity. It also doesn't log users IP Addresses, the IP Addresses of servers they connect to, or the content of any data you might send or receive while using its service.

This is reassuring and Goose VPN also confirms they do not resell any information to third parties. 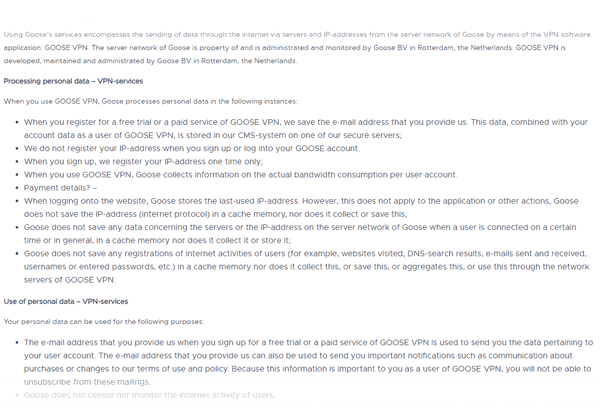 There is quite a lot of information that they do keep, such as your contact details, payment details, and any details you share when using their technical support.

This is not ideal, but they are far from the only VPN that does this.

The Goose VPN server network is modest and focused heavily on Europe.

There are a total of between 52-78 servers in 26 countries. But the only locations Goose VPN currently offers outside Europe is the USA, Canada, India, Hong Kong, Japan, Singapore, and Australia.

The network they do have covers a lot of the major VPN markets. But there is no denying that this is one area of their service where improvements could be made, especially for non-European customers.

While they're wholly suitable for European customers, you may need to give them a second-thought for use elsewhere.

TrustPilot users rate the service highly scoring an average of 4.1 / 5 [2].

Goose VPN offers a choice between OpenVPN, IKEv2, L2TP, and even the less secure PPTP protocol.

One thing they do well is simplify how users can switch between protocols.

The default protocol is clearly displayed on their apps.

If you click on the protocol, it directs you to a straightforward settings menu where you can switch to whichever other protocols are available on your device.

This does, however, place the onus on the user as Goose VPN doesn't always default to the most secure protocol.

This means it is essential that users are aware of what protocol they are using, something that is not necessary with most VPNs.

Goose VPN uses 256-bit AES encryption with its OpenVPN connections. But if you default to a different protocol, the level of encryption can be reduced.

Secure encryption is available on Goose VPN, but it is not automatically enabled and you need a bit of knowledge to make sure it is set up correctly.

For that reason, we probably wouldn't recommend Goose VPN to VPN novices who are solely after using it for privacy protections. If on the other hand you're just after a bit of geo-unblocking, you'll appreciate the automatic speed advantages.

The number of simultaneous connections has become a real battleground between VPNs of late as they compete to allow their users to connect more and more devices.

Goose VPN have followed the trend set by a few other new VPNs recently and decided to offer subscribers unlimited simultaneous connections.

This is excellent news as it means you can connect all your devices and those of your family too.

This isn't standard across the VPN industry, so is a definite perk of the service.

Goose VPN is headquartered in Rotterdam, Netherlands and is therefore under the authority of Dutch and EU law. This is not the best place in the world for a VPN to be based, but it is also not the worst either.

The Netherlands is one of the nine-eyes countries which shares intelligence and information. This is not ideal.

But local laws do not require Goose VPN to retain user logs and other sensitive information.

Their privacy policy states clearly that they do not retain this information. So, even if local law enforcement agencies come knocking, Goose VPN holds little information to give them.

Goose VPN has dedicated apps for all Android and iOS devices. We tested the iOS and Android app and found them to be bright and functional.

The iOS app features a simple connect button that looms large in the centre of the main window and will connect you to the fastest available server with a single click.

Below it are three icons. The lightning bolt is there to switch on the Smart Safe technology which allows you to configure the VPN to switch on and off depending on what networks you are using.

Click on this and you open up a server list which is easy to navigate and allows you to choose optimised servers for P2P, streaming, and business users. 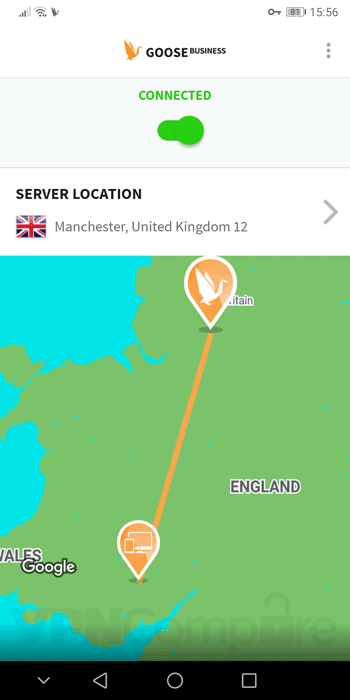 There is also a menu button in the top left of the screen that lets you access customer support and account details. The advanced settings option at the bottom of the screen has another Smart Safe On-Off button and also lets you choose your protocol and your preferred servers.

The Android app features much less. A connect button and server selection adorn the main screen with very little in the way of customisation.

It is a simple, paired-back app. Installation and login is easy and the app has a contemporary feel that a lot of more established VPNs could learn from.

Goose VPN offers desktop apps for Windows and macOS devices. We tested both the macOS and Windows app, which was very different from the mobile app.

This one has a more dated design and is centred on a map. Curiously, this is not an interactive map, so it doesn't actually do anything useful.

To switch servers, you have to navigate through the arrow button to the right of the listed country. This opens up a pop-up window which contains the server list. 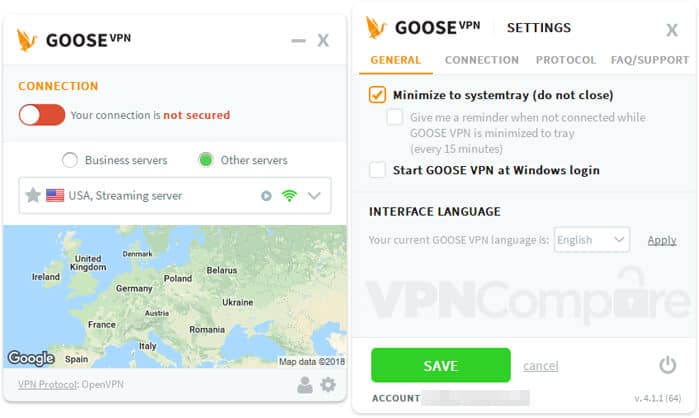 Again, the Mac app features the Smart Safe on-off button which the Windows one doesn't and at the bottom of the screen are details of the VPN protocol being used. Click on this if you want to switch protocol.

The top right menu button has links to preferences and customer support.

For such a simple VPN, the macOS desktop app is actually a bit confusing and messy although their Windows app seemed better.

Their iOS app has recently been updated and hopefully there are plans for a similar upgrade to this app too.

Aside from apps for all the most popular devices, there aren't many more.

Goose VPN does offer a Chrome extension but there are none for other browsers.

Equally, there is no Linux app but there are helpful guides to point you in the correct direction. There's also no VPN app for the Amazon Fire TV, so if you're a big streamer, you'll find little support here.

Goose VPN claims to be able to unblock any website, including Netflix. A quick internet search reveals that users experiences are somewhat mixed, so we were keen to test it for ourselves.

On connecting to their US ‘Streaming' server, we were able to access US Netflix successfully the first time.

This is a positive point if you want to enhance your Netflix catalogue.

When connecting to the UK servers, BBC iPlayer worked fine on most occasions. It can be a little hit-and-miss but this is often the case with most providers.

Overall, we had few problems streaming iPlayer while connected to the Goose VPN network.

Goose VPN claims to be able to unblock anything and our tests showed a mixed bag of results.

The service worked fine with ITV Hub, Channel 4 and Channel 5. However, some Australian services like 10Play weren't so successful.

The app has dedicated ‘Streaming' servers for both the United States and the Netherlands.

In our tests, the US server worked fine for watching US Netflix. It also appeared to work with the Disney+ website, although we did not test it specifically for streaming.

Goose VPN does offer a genuine 30-day free trial but it works a bit like a money-back guarantee. It's also limited to a pretty meagre 500MB.

You have to enter payment details to sign up but you won't be charged for the first 30 days no matter which package you choose.

However, the onus is on you to remember to cancel your subscription if you don't want to continue using Goose VPN. A little like Amazon Prime but different to most VPN providers who charge you upfront and then require you to request a refund.

Payment is accepted using all the normal credit card and payment services such as PayPal. Dutch users can pay via iDeal. Payment by Bitcoin is not currently offered.

Goose VPN is getting a lot of things right. Connection speeds are relatively good, mobile apps are easy to use, and the no user logs policy looks watertight.

But there are issues too. Some servers performed worse than what is available elsewhere and while the pricing is low, there are faster alternatives for the same money.

The macOS app especially is a pale imitation of their mobile equivalents and the server network is a modest one suitable mainly for European based users.

Streaming on the service is positive with many of the most popular services able to be unblocked and although we suffered one or two issues, they weren't any more inconvenient than any other service.

There is definite potential here. If you're looking for an artisan provider backed by a fully bona fide company in a reputable country, then Goose VPN could be the choice for you.

However, while there's a lot of positives, there are better providers for about the same money. It's not a bad service – but it could be better.