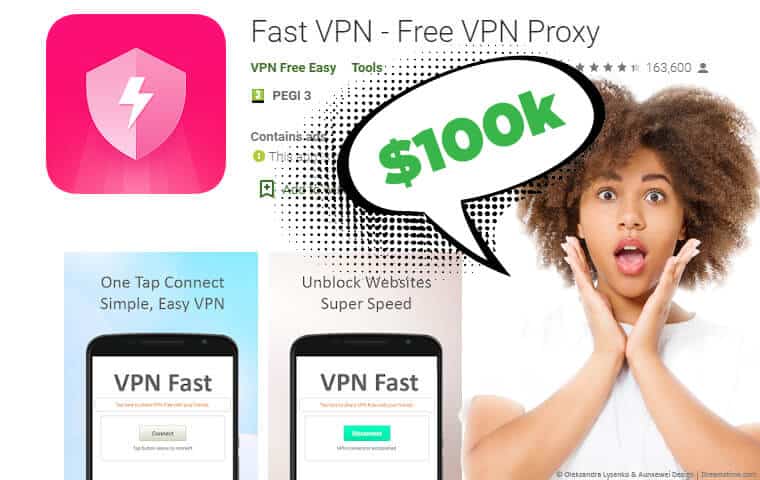 If you've ever wondered how free VPN services are funded or indeed how profitable they are then an internet auction is giving you a glimpse into this often murky world.

While most of us have the assumption that free VPNs are bad and our concerns lie mostly with how they will handle our data, a recent auction on the website auction service, Flippa has shone a light on the profitability of such apps.

Thoughtfully named app, ‘VPN Fast' has put itself up for sale on one of the internet's biggest website and app marketplaces.

What's fascinating about the auction is the owner claims to have made a staggering $112,405 with a net profit of $94,481 in June of this year alone and results for other months are just as tantalising.

VPN Fast or ‘Fast VPN – Free VPN Proxy‘ to give it its full Android store title is one of the many hundreds of free VPN apps available on the Google Play Store, available for all Android devices.

Current stats show that it has been downloaded and installed more than 5 million times.

With a 4.4 review score and more than 163,599 individual reviews, it looks, on the surface, to be a rather well-received app.

But what's more interesting is the vast profits the app claims to be generating.

The app's auction shows that June 2019 was a particularly profitable month with a near $100k claimed profit. Still, other months have been equally as profitable generating turnovers of between $16,000 and $84,000 with profits ranging anywhere between $11k and $47k.

Not bad for an app which essentially costs the user, zero.

With such eye-watering profits available, the next question leads us to how it is creating such staggering wealth.

The auction claims profit is generated using a mix of Admob and banner ads.

When a user downloads and uses the app, adverts are displayed which in turn earns revenue for the app author.

Quite a lot, it appears. 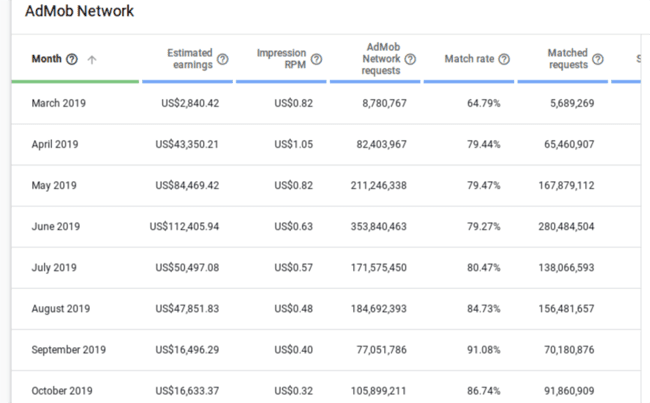 From a privacy point of view this is concerning because while the Privacy Policy claims it does not store or record any user data, it does highlight the fact that the advert networks can store cookies or obtain other user information.

This would allow them to track your movements even after finishing using the app.

While the auction claims revenue is generated using “Only admob interstitial and banner advertisements”, more concerning is the Privacy Policy (which is hosted on a shabby Blogspot page) highlighting some potential dangers.

“Our business may require us to transfer your Personal Data to countries outside of the European Economic Area (“EEA”), including to countries such as the People’s Republic of China or Singapore.”

An instant red flag is raised when terms like “Personal Data” is coupled with the word “China” in the same sentence.

Often free VPNs are owned and operated by shady Chinese corporations, but this appears not to be the case in this instance.

The Flippa listing for the sale gives Turkish citizen, ‘Musab Osman YILMAZ' as the owner. Further research about the owner yielded no concrete results.

However, much of the privacy policy appears to have been copied word for word from other sources which may indicate that data will not be passed through China. Nonetheless, it is still concerning that a product aimed at protecting your privacy has such an amateur privacy policy.

All yours for the cool sum of…

Running a free VPN seems like a profitable game, with relatively low overheads and massive returns.

So if you're thinking of getting into the game, what's it going to set you back?

Well, if you've got half a million dollars sitting around, you can start the bidding at the required $450,000.

If you don't want to mess around waiting for the 18 auction days to expire fighting with the great unwashed, then you can pick it up right now using the ‘Buy it Now' option for a cool $750,000.

With just 20 ‘Watchers' and only two comments on the auction, both of which have gone unanswered it's unlikely the app will sell for anywhere near that price.

That said, for an app which appears to have only been in existence since March 2019 with total costs of just $‭107,464‬ and a profit of over a quarter of a million dollars (‭$267,077‬ to be exact) it could continue to be a nice little earner for Mr. Yilmaz.

… Now, where did I put that VPN app source code again?