Does ExpressVPN Keep Logs? We Discover the Answer 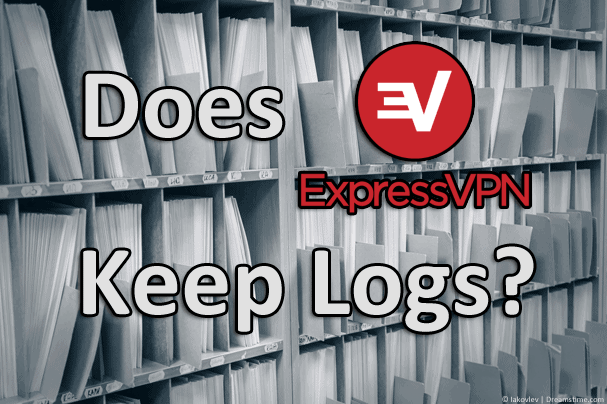 Wondering if ExpressVPN keeps logs? You're not alone.

In this article you'll discover the answer as we've been finding out.

ExpressVPN is one of the biggest VPN providers in existence. With VPN servers in more countries than most and a huge money back guarantee it's easy to see why they're so popular.

In fact in our own testing this year we found them to offer speeds at the higher end of the scale, easily outperforming many other VPN providers in the industry.

When considering any VPN service you should consider their logging policy, but does ExpressVPN keep logs?

We delved into this important question and found the answer. So let's find out what we discovered.

Are logs kept at ExpressVPN?

The simple answer is No. ExpressVPN does not keep logs.

If you're thinking of signing up to ExpressVPN this answer can put your mind at rest that you're getting a provider that values your privacy.

If you're already an ExpressVPN customer then you can be reassured that the service you've been using is doing its utmost to keep you secure online and your privacy protected.

But what does ‘no logs' actually entail?

It's easy for VPN services to claim they store no logs, in fact nearly all VPN providers do, but often it's not the truth. But what about ExpressVPN?

What does ExpressVPN mean when they say they don't keep logs?

ExpressVPN claims to store no logs of your activity. This includes but is not limited to what you did while connected, what websites you visited, who you chatted to or what you streamed.

They also don't retain any logs about your connection data, also known as metadata. This is information such as what time you connected, what your local IP address was etc.

ExpressVPN does keep information on what apps and app versions you use, if you made a successful connection on any particular day, but not the time of connection and how much data was transferred in total.

None of this information can link you to your activity.

How can I trust ExpressVPN?

Nearly all VPN providers make claims that they don't store any logs and unfortunately it's almost impossible to put this to the test until someone becomes the test case.

In the past we've seen providers like EarthVPN be caught out because one of their servers were logging and more recently PureVPN were seen to be cooperating with law enforcement.

ExpressVPN came to our attention at the end of 2017 when it was revealed they were caught up in quite possibly the highest level criminal case any VPN provider has been involved in.

In 2016 a Russian ambassador to Turkey was shot dead in public. It transpires that someone involved in the case used ExpressVPN. ExpressVPN were unable to assist with the case because they did not retain any details of the user who accessed the service.

For more details on the Russian ambassador assassination and ExpressVPN's involvement, you can read here.

In 2019, ExpressVPN went a step further and had their entire service audited by a third-party organisation to prove their claims were true.

The result of the audit showed that ExpressVPN does not retain any logs of their customer usage.

ExpressVPN is registered in the British Virgin Islands and they're one of the only VPN providers to be located there.

They claim due to their registered location there is no legal requirement to log details on their users' usage.

They also claim that any legal proceedings brought against them must be punishable by a similar offence in the BVI that would lead to a prison sentence of longer than 1-year.

Any law-enforcement body outside the BVI would need to go through the correct channels in the BVI to force ExpressVPN to hand over details of their users.

It's worth remembering that due to ExpressVPN storing no logs of your activity there would be very little they could do to assist in such cases.

ExpressVPN by their own admission don't store any logs of what you do while connected to their service. Nor do they store any metadata logs.

Unlike many other providers this no-log claim has been tested in an extremely high-profile case.

It has also been proven by a third-party audit. There are no known cases to disprove any of these claims.

In a privacy world filled with false promises and snake oil and so many VPN providers to choose from it's reassuring when a VPN provider has had their logging policy put to the test.

If you're interested in finding out more about ExpressVPN then take a look at our latest review of their service. If you want to visit their website to check them out then you can use the button below.

Get an extra 3-months service free using this link