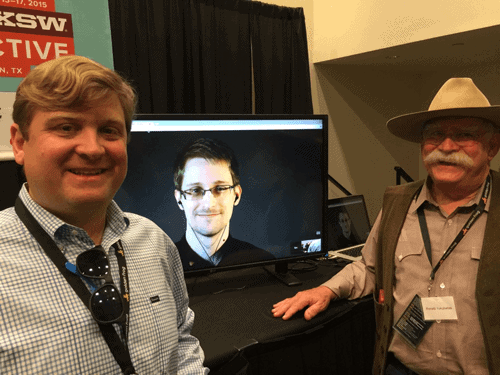 Each year in Austin, Texas in the United States the annual South by Southwest festival is held. SXSW as it is more commonly known is a collection of festivals and conferences on a range of subjects from film to music but more importantly interactive and emerging technologies. One of the leading VPN providers VyprVPN although incorporated in Switzerland also has offices in Austin, Texas and as such usually sees them being a large presence at SXSW by hosting conferences of their own.

At the SXSW festival in 2014 one of the talking points was the live video link appearance of Edward Snowden, the US intelligence contractor who in 2013 released a cache of confidential information informing the world about the scale of mass surveillance carried out by the United States, United Kingdom and other countries. The information release was a game changer and so the appearance of Snowden last year was something of a scoop for SXSW.

This year SXSW took place between March 13th and 22nd 2015. On the morning of March 15th Edward Snowden followed up last years appearance with another showing although this year it was to a select audience of representatives from tech companies. The conference was a private affair and limited to an invited audience of around 25 leaders in the tech industry.

Big names in attendance included Cloudflare CEO Matthew Prince, the senior product counsel for twitter Matthew Zimmerman plus Sunday and Ron Yokubaitis from Golden Frog owners of VyprVPN. The talk focused on cybersecurity with Snowden discussing what needs to be done to fight back against government surveillance.

With VyprVPN representatives in attendance the discussion covered topics such as key concepts in the privacy and security industry with which Snowden encouraged VPN providers to further develop technologies that can obfuscate VPN traffic so it can not be detected as a VPN connection. VyprVPN released a proprietary technology last year called Chameleon that disguises VPN traffic so countries such as China and Iran who heavily police internet use are less likely to discover that the data being transferred is VPN use. With Snowden touching upon this issue it appears that he indicates that other VPN providers should follow suit to improve the security and privacy of users world wide.

Sunday Yokubaitis quizzed Snowden on how personal VPN services such as VyprVPN themselves and other providers such as those listed in our VPN Comparison Guide can add to their product base to fill the gaps in current policy. As well as highlighting the fact that VPN providers need to create technology to obscure VPN connections Snowden also touched on how the tech industry needs to work on randomising efforts for other services so network level monitoring can be defeated.

One area which was concentrated on heavily was how tech policy could curb government surveillance. Snowden was less interested on the policy side and indicated that companies needed to create products to protect the public because he feels that waiting for government to protect the public will result in waiting a very long time. Encryption was again highlighted as a working factor against mass surveillance with Snowden pointing out that intelligence agencies such as the NSA have a budget to adhere to. The more everyday users make use of encryption the more costly it is for government agencies to run such surveillance programs.

Further information on the SXSW Snowden conference can be seen at Golden Frog’s own Blog Page or on TheVerge write up of the event.