Home » Guides » How to download Android apps out of country

Android apps, like everything these days have region restrictions that come in to force wherever we go. From regional restrictions on things like DVDs at the turn of the millennium to online streaming content being restricted to a particular geographical region, it seems like in a world that is ever smaller due to the internet and faster communications, that the entertainment industry and others are always wanting to stifle innovation and if you're lucky, release products and media in a tiered manner.

The world has changed over the last 10-15 years and the original way of releasing products and media has pretty much been obliterated with the uptake in internet use. However even though user interaction has changed, it appears the same antiquated distribution models still loom heavy in many markets. While regional restrictions serve some purpose in some cases, the majority of instances have no merit. Stopping you downloading Android apps out of country is one such case.

A growing trend is beginning to appear in the Android App market which has become more prevalent in recent years as the popularity of the Android system has taken hold. This trend is the restriction of apps to certain regions or countries. While some apps really are only of use to a certain market, others have a worldwide appeal but are restricted based on the publishers own wishes to limit the uptake of an app or stagger its roll out over time.

The least amount of restriction includes a handful of apps that you can freely download via the Google Play store directly to your device without issue, however when using the app you can find that the content isn't available because you're out of region. As with desktop computers this can be overcome simply by connecting to a VPN server in the country that the content is intended for.  To know which one to pick check out our review of the best Andriod VPNs 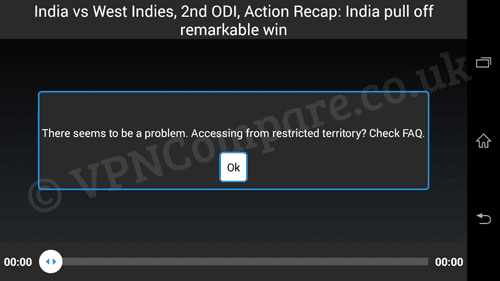 How to bypass app region restrictions

For example, if you downloaded the BT Sport or Sky Go Android app and went outside the UK, you could simply sign up to a VPN provider such as VyprVPN or IPVanish and install their Android clients to connect to a VPN server in the UK which would enable both media streaming apps to work by bypassing the country restrictions.

However in a more recent twist the actual downloading of Android apps out of country is now being restricted in many cases. I found myself in a similar situation in that I was unable to download a specific app abroad because it was restricted to the UK, this type of situation is quite common in other countries too with apps being restricted to being installed in the US, India, Australia etc. It doesn't actually matter where you're from, apps can be restricted to certain countries which makes them impossible to install in the first instance.

I, like yourself no doubt, tried various methods to download the app I required, this included visiting the Google Play store while connected to a VPN server, attempting to edit my location details in the Google play settings plus a whole host of other workarounds I could think of, none that worked.

I then happened across a website called APK Downloader. There are a few similar out there but this is actually one of the best because it isn't covered in adverts and actually works correctly. The first site I discovered downloaded the initial version of the app which was old but with APK Downloader it downloads the latest version.

As an example, lets say you wanted to download the CNN Breaking US & World News app from Google Play but couldn't because of region restrictions. Firstly you would visit Google Play and find the app. Then highlight the section of the URL as highlighted below.

Next visit the APK Downloader website and paste in the copied portion from Google Play in to the box under “Package name or App name“, then press Generate Download Link.

A link will be created that you can click and download the app from in .apk format. Next hook up your phone to your computer and simply copy the .apk file to your phone. Navigate through your phone using a file manager and click on the .apk file, you will now be able to install directly. 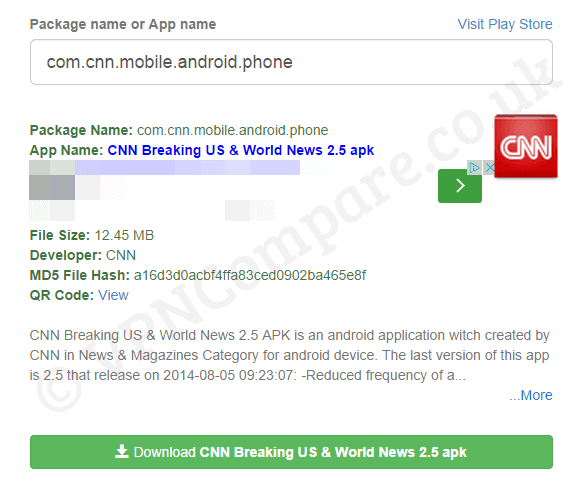 If the app itself is regionally restricted then install OpenVPN for Android for use with your VPN provider or use the VPN provider's own Android app as explained earlier in this article to circumvent to regional restrictions.

There you have it, an extremely simple way to download Android apps out of country.