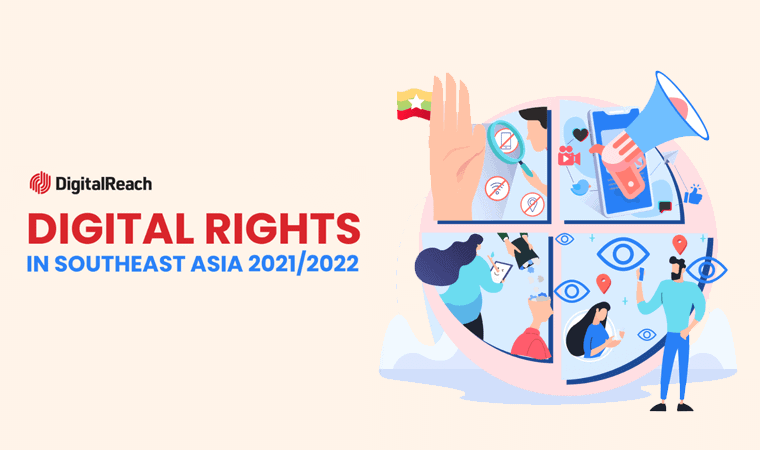 DigitalReach, an organisation that examines the impact of technology on human rights in Southeast Asia has published its annual report on digital rights in the region and it doesn't make for pretty reading.

The report, which is entitled Digital Rights in South East Asia 2021/2022, finds growing evidence of governments across the region imposing more digital surveillance, seeking greater control over social media activity, and attacking independent online media activity among a host of other nefarious activities.

It concludes that South East Asian political leaders are not only increasing the extent of their interference in the online rights of their citizens but they are also deploying increasingly sophisticated tactics in order to do it.

The dire state of digital rights in Myanmar

Much of the report is focused on Myanmar, a country that has seen a significant crackdown on human rights across the board since the military seized control of the Government at the start of 2021.

We reported at the time on increased censorship, blackouts, and VPN blocks across Myanmar and that has been toughened up in the past year with full-on jail sentences for VPN users now in the offing.

Digital Reach concurs with our assessment describing some of the tactics used by the military junta in Myanmar as “a direct threat against digital rights”. But they also note that while Myanmar might be the worst offender in 2021, their activities are part of a much broader pattern across the ASEAN region.

Assaults on freedom of expression normalising

In particular they flag the threats posed to freedom of expression online. Among the examples posed is how different South East Asian countries are attempting to control what users can and cannot do on social media.

It is even noted that, while these tactics tend to focus on more established and popular platforms across the region, such as Facebook and Instagram, they are also increasingly being focused on new and upcoming platforms as well.

The report talks more broadly about the “normalization” of the use of internet restrictions.

This is a particular concern because it means that such restrictions are not just being used in response to particular events but are becoming increasingly common on a day-to-day basis.

Digital Reach has also found that there has been a noticeable increase in the use of digital surveillance technologies and techniques across South East Asia in 2021.

The worst example that is highlighted in this report is in Thailand, where they have discovered that the Thai authorities have been using Pegasus against political activists.

Pegasus is the most powerful and invasive piece of spyware in the world so its use to target political activists in Thailand is a matter of grave concern for political freedoms in the country.

The report's authors concluded that political dissidents in the region are likely to face further digital threats in the future but said it was not clear at the moment what these threats might be and how prepared they were to handle them. It suggested that further research into this area was needed.

On a broader digital surveillance issue, the report also raised concerns around how digital contact tracing technologies were being used in the region.

While it concluded that digital contact tracing had had minimal impact in helping countries deal with the impact of the COVID-19 pandemic across the region, it noted that a lot of governments were continuing to use the technology and even push for its expansion.

As well as questioning what this technology was being used for now that COVID-19 is in retreat, the report also noted that there are serious question marks over the lack of transparency many Governments have around the technology.

The other key point highlighted in the report centres on the twin issues of fake news and fact checking.

Again, this is reported with a focus on political dissidents which Digital Reach state are increasingly being targeted by state sponsored information operations which have also become more sophisticated over the course of the year that this report is looking at.

It noted that there is also a chronic lack of independent fact-checking organisations operating across the region to counteract this type of fake news.

What fact checking organisations do exist are lacking in both funding and resources and no opposition to a well-funded state sponsored campaign of disinformation.

It concludes that there is a need for more of these fact-checking organisations and there needed to be a greater focus on making them robust and independent.

To their enormous credit, Digital Reach have compiled a detailed and thorough report which paints a stark picture of the poor state of digital freedoms in the region. It is also a report that is conscious of where information is lacking and is open about where more research is needed.

This is a worthwhile and timely report and one that all governments in the South East Asia region should read and then hang their heads in shame.

That won't happen of course and the most depressing conclusion that is reached by reading this report is that digital rights in the region are likely to get worse before they get better.

For political dissidents and even regular internet users, the only real way to use the internet freely and safely across much of South East Asia, is by taking your own precautions such as using a VPN, and making sure that your own internet connection is private and secure when you need it to be.