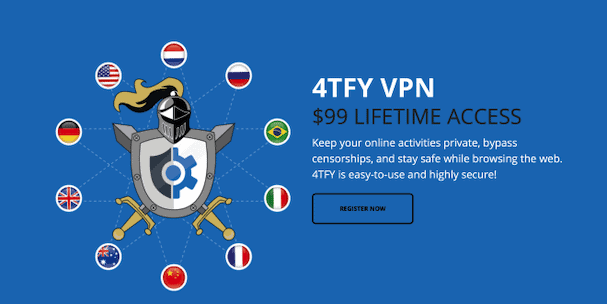 Ever since Australia passed their highly controversial encryption and data retention laws last year, VPN use in the country has been on the rise.

So, when a new VPN service was launched through a Kickstarter campaign, it is no surprise that it proved popular with Aussie internet users.

But now that VPN has disappeared, leaving users high and dry and many significantly out of pocket.

The rise of 4TFY VPN

4TFY began as a Kickstarter campaign launched by a little known Australian called Luke Millanta. It billed itself as ‘an affordable VPN for all’ and offered users a lifetime of VPN access for just US$89 (AU$119).

Some including ourselves warned at the time that this was too good to be true and in hindsight we were right.

But, at the time, enough people were willing to put in their money for the Kickstarter to smash through its target. In total, 850 backers signed up raising a total of AU$115,167. This was more than four times their original target.

It didn’t take long for 4TFY to be bought out or so it was claimed.

The same year, Millanta announced that he had sold 4TFY to an “a consortium of investors”. The new owners remained anonymous which will have raised a few eyebrows and the sale also led to a delay in the rollout of the service.

At the time, users were told this was because 4TFY was being relocated to the British Virgin Islands to escape Australia’s intrusive new data retention laws. Most users were satisfied with that reason and, true to their word, 4TFY’s VPN service did come online in November 2017.

However, yesterday, it was offline once more. Even worse the company seems to have disappeared altogether.

The 4TFY website has gone to be replaced by an error message. Meanwhile, customers are reporting that their VPN service is no longer working.

We reached out to the last known contact email addresses for comment only to have them bounce back.

According to one user who goes by the name ZimDownUnder, attempts to connect through both Tunnelblik and OpenVPN are not working and 4TFY’s server IP Addresses are reporting that they can no longer be found.

Other users are confirming that they are experiencing the same problem and the only conclusion that most can reach is that the anonymous owners of 4TFY have decided to cut and run.

It is terrible news for subscribers to 4TFY who will now have no choice but to fork out more money for a new VPN subscription.

We would strongly recommend that they opt for an established off-shore VPN such as ExpressVPN or NordVPN this time, rather than gambling on a start-up VPN offering big promises but little credibility to back them up.

It is strongly advised to avoid paying for any service that is offering a “lifetime” subscription.

The dangers of a lifetime subscription

The tragic tale of 4TFY should serve as a powerful reminder to all VPN and potential VPN users who are considering a lifetime subscription.

These deals usually look like terrific value for money. But the fact that is they are almost always too good to be true.

The problem for VPN providers is that there are ongoing costs involved in running a VPN.

If you sell lifetime subscriptions you get a larger chunk of money up front to help with start-up costs. But unless you can sign up regular subscribers,  you will soon burn through this and have no income to cover these ongoing costs.

The fact that 4TFY has operated for 18 months before disappearing suggests that this is precisely the problem they have faced.

In the VPN world, the only providers that we have seen offering lifetime subscriptions tend to be one which have question marks about their long-term viability.

As one former employee of a hosting company said in response to the 4TFY news, companies offering lifetime subscriptions were either trying to rip people off or had no clue about what they were actually doing.

It is too early to speculate about which camp the people behind 4TFY fall into. But their disappearance is deeply disappointing news for all their customers and should serve as a warning to other VPN users around the world.

Users looking to recoup their money may have a difficult time following the trail.

The company was claimed to have been purchased by a “a consortium of investors”. Who these were is unclear and as the company was then registered in the British Virgin Islands it's almost impossible to find out.

We had hoped founder Luke Millanta could have answered these questions but after contacting us after publishing he stated categorically that he has not been involved with the service since it launched in November 2017.

This article has been updated for clarity to ensure there is no unintended suggestion that Mr Millanta has been in any way involved with running 4TFY since its sale in November 2017.