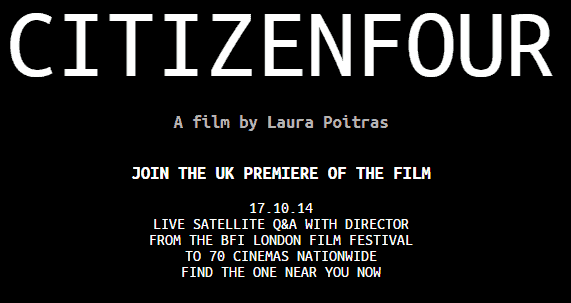 Read our Citizenfour review from the premier 18/Oct/14

In 2013 the world woke up to a name that has almost become so well known that literally everyone has heard of him, Edward Snowden.

Edward Snowden is best known as an American citizen who leaked classified information from the National Security Agency (NSA) about the various government spy agencies around the world including the NSA itself and the UK's GCHQ amongst others. Via The Guardian newspaper and others he single handedly changed the world's perception on our governments and the way in which intelligence agencies gather data and use mass surveillance.

While we all know the perceived stories as dictated by various media outlets which may or may not be influenced by various parties it is always imperative to seek a wide range of opinions and angles to resolve a conclusion as to if you agree or disagree with the action taken by Edward Snowden.

Laura Poitras who was the first to be contacted by Snowden started filming when first meeting with him in Hong Kong with Glen Greenwald and Ewen Macaskill.

Citizenfour is the documentary movie made by Poitras which shows the events of 2013 from an angle never before seen, a personal view from Edward Snowden himself. The movie itself was shown at the New York film festival on the 10th October to generally favourable reviews.

FirstShowing, “Along comes a documentary that may change your life by showing humanity in its most honest form“

Variety, “Poitras skilfully avoids casting Snowden as either her hero or the determining focus of her story“

Citizenfour will be shown nationwide in the United Kingdom on the 17th October 2014 and released worldwide on the 24th October 2014. Those in the UK can visit the Citizenfour website for a list of screening venues and links to purchase tickets for the 20:00 showing on Friday. Worldwide users should keep an eye on the site for more details for screenings in your country.

… and for those wondering, why Citizenfour? it was the handle used by Snowden when he first contacted Poitras.