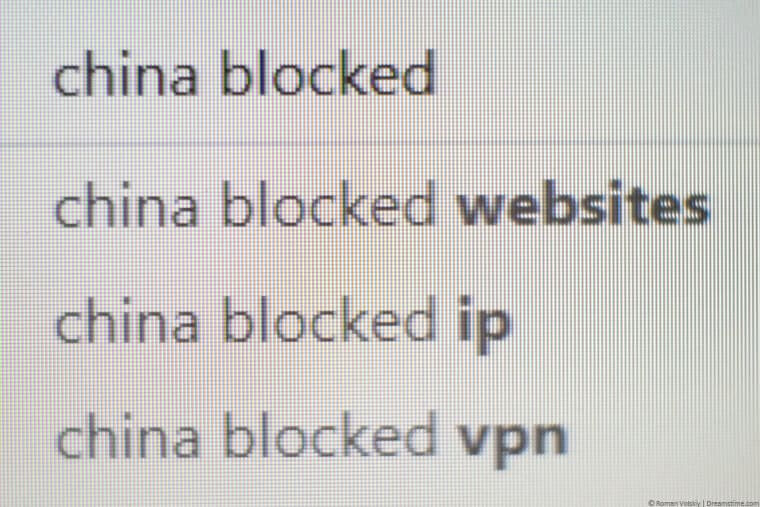 China is well-known around the world for its online censorship, which is why its citizens often resort to using VPN technology to go beyond the ‘great firewall.'

However, while using such technology is not allowed in the country, it is also not so easy to track down those who do use it.

But, when the country's authorities decide to crack down on someone, they seem to be able to find a way, and such events usually make headlines around the world.

This is precisely what happened recently, according to a report published yesterday, July 29th.

Now, in China, pornography is not allowed, and all such websites are blocked by the country's internet service providers (ISPs).

As mentioned, the country is known for its censorship, and that includes pornography, social media sites, foreign news sites, and many other things in between.

The use of a VPN itself is only allowed to those who have specific permission from the government via authorised VPN providers (not the kind you or I unblock Netflix or use to stay secure).

A quick search of the Google Play Store shows a ‘Shadowrocket' app to be a shady ‘free VPN' with questionable ownership, a gmail contact address and the even more bizarre situation that it links to the completely unrelated Shadowsocks' privacy policy.

Check out our list of reliable working VPNs for use inside China.

The report further says that “At present, in accordance with the provisions of Article 6 and Article 14 of the “Interim Regulations of the People's Republic of China on the Administration of International Networking of Computer Information Networks”, the offender Chen has been given a warning and punishment.”

The report itself, published by the local media outlet known as The Paper, obtained the information from the notice posted by Changde police department.

However, when the media outlet called the police department to inquire about the case, the staff member who answered denied knowledge of the situation and hung up abruptly. Only a few hours later, the official report posted by the police was removed.

The law is not the same for everyone

China's laws regarding VPN technology changed quite a bit over the last few years, with the most significant change coming in 2019. The country made VPN use forbidden.

However, last year, in September, numerous local and foreign firms operating inside the country complained, as its ‘Great Firewall of China' prevented them from conducting business.

The country then decided that VPN use will remain restricted, but that tech firms, as well as certain individuals, can receive permission to engage in ‘cross-border networking.'

Of course, not any VPN would do, and the country only allows the use of an approved telecom provider.

With China's thirst for information and control of online traffic being rather high, the chances are that these ‘approved' VPNs are not as private and protected as other services, which the country had banned from operating within.

Those who do try to provide unlicensed VPN to China's citizens are regularly fined, and in some cases, they may even receive a jail sentence.

As mentioned, punishments for regular citizens who are caught using VPN technology are rare, even though a considerable portion of the country's population likely uses them for various purposes.

Even so, the country does crackdown on illegal VPN users, who then use this technology to access adult content online.

This time, Chen had to pay the price, but he is far from being the first one.

In fact, another similar case from three years ago resulted in quite a similar outcome. Back then, a man from the Guangxi Zhuang Autonomous Region got a five and a half years in prison, in addition to a huge 500,000 yuan ($76,000) fine for using VPN.

Even last year, China punished another individual from the Guangdong province, just for using this technology to access blocked sites.

Of course, censorship and geo-restrictions exist around the world, and pretty much every country blocks some content that it doesn't want its citizens to access. Some countries block adult content, while others focus on preventing access to torrenting websites.

However, few are as strict about their censorship as China, which, at this point, blocked most websites of the global internet, and replaced them with its own versions of them.

At the same time, it continues to crack down on one or two users per year  as far as it is known to casually remind its citizens what might happen to them if they continue to exploit this forbidden technology.