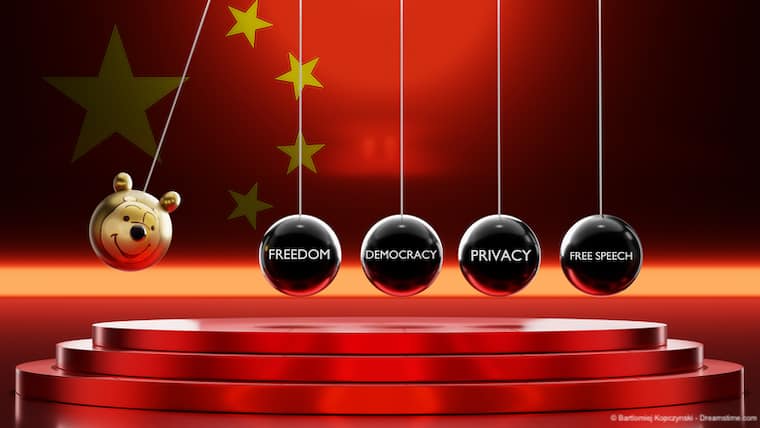 The Chinese Communist Party (CCP) is continuing to tighten its grip on internet freedoms still further in an attempt to prevent the Chinese people from learning the truth about the devastating coronavirus that continues to sweep through the country.

In particular, they have been carrying out a fresh crackdown on VPNs to try and prevent people from accessing international coverage of the crisis which doesn’t follow the Party’s propaganda.

VPN’s under attack in Communist China

According to the Financial Times, many of the biggest and most popular VPNs in China have faced sustained attacks from state entities in China to try and force them offline in the country.

Communist China is already home to the most oppressive internet censorship and surveillance regimes in the world. All internet access is tightly controlled and the only way many Chinese people can access the internet freely is by using a VPN.

VPNs have been banned in Communist China for several years now and as part of the increase in internet restrictions under Xi Jinping punishments for being caught using or selling a VPN there have increased significantly.

But many people continue to use VPNs in China and many premium VPNs work around the clock to keep their service accessible behind the Great Firewall. But over the past few weeks, this job has got considerably harder.

As ExpressVPN, one of the most popular VPNs in China, noted in a comment on their website earlier this week, “We are aware of a new escalation in blocks in China, and our team is working around the clock to address the impact on connectivity.”

CCPs priority is managing the narrative

It has been clear for some time that the CCP’s top priority is not managing the coronavirus outbreak but rather the narrative around it. Control of information is one of the key tools it uses to maintain its grip on power and any form of dissent is seen as a challenge to the party’s authority.

Yet, the coronavirus outbreak and ongoing attempts to cover up its extent and the true impact it has had, has led to widespread anger in China. More and more Chinese people have been openly calling for greater freedom of expression and there is little doubt the party sees this as a far greater problem than the virus.

This was seemingly confirmed on Sunday when the CCP’s media regulator wrote that its “biggest political task” of the moment was to guide the coverage of the epidemic and fulfil the party’s news ideals.

It is hard to measure the extent to which people are trying to access genuine information inside China. But VPN use in China has grown steadily for some time and continues to do so.

GreatFire, which monitors Chinese internet censorship runs FreeBrowser.org, a service which allows Chinese internet users to browse foreign news content. It reports hits to the site from inside China having doubled since the January 25th, shortly after Wuhan at the epicentre of the Coronavirus crisis went into lockdown.

As Charlie Smith of GreatFire explained to the FT, this suggests that trust in Communist Party media is melting away.

“Despite the wide availability of domestic news about the coronavirus, Chinese people are still looking to overseas, uncensored platforms, for more information,” he explained. “This is a very strong sign that most Chinese people do not trust the authorities to tell them the truth about the virus,”

What GreatFire says about VPN access in Communist China

As well as FreeBrowser.org, GreatFire also runs a service called Circumvention Central, which allows users to test the stability of their VPN inside China.

This tool has also seen a rise in users over the past month while it’s data has confirmed that a number of the most popular VPNs in China have had issues with stability. That is not to say that there are completely inaccessible, but the sustained attacks they are facing from state forces means service is patchy.

This information certainly backs up what our sources inside Communist China have been experiencing. VPN access comes and goes with some services far more stable than others.

The battle between Chinese censors and VPNs is like a game of cat and mouse. The Communist Party staffers have no sure-fire way of taking a VPN down indefinitely. If a VPN chooses to work to keeps its service online in China, it will do so.

But what the censors can do is interrupt service and frustrate users. No doubt they hope that the inconvenience of these interruptions will persuade people to eventually give up on VPNs.

But all evidence suggests the opposite is true and the more censors seek to block VPNs, the more determined the Chinese people, and the VPNs themselves, are to keep them going.

The coronavirus has seen a swelling in anti-government sentiment in China that has not been felt for many years. There is an increasing sense that if the crisis continues, the people of China could eventually run out of patience with those that control them and take matters into their own hands.

If that were to be the case, VPNs will be essential in helping with the spread of information and allowing dissents to communicate freely. Both the people and the Party know this, which is why the battle for online freedom in Communist China is so fundamentally important.