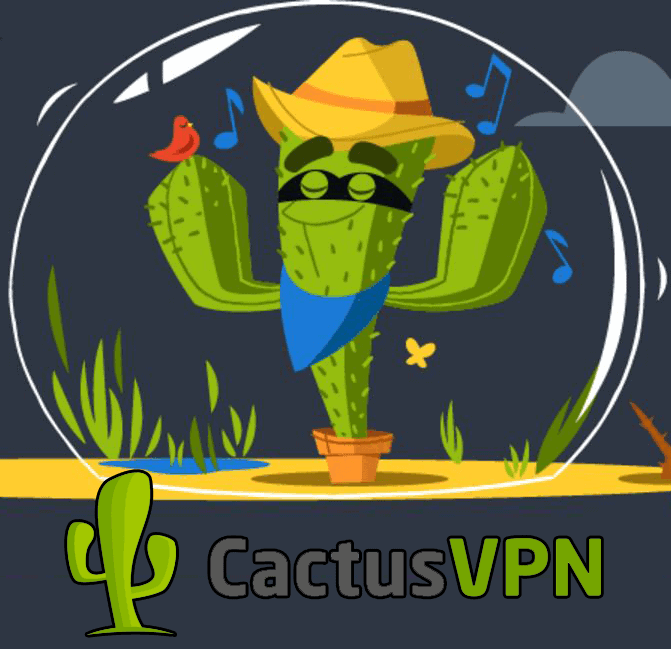 CactusVPN is not perfect, but it does have plenty to offer.

CactusVPN has only been around since 2012, yet already it is attracting plenty of attention within the market for its streamlined service, unique pricing structures, and its VPN and SmartDNS bundle options.

Over the past few weeks, I have been giving their service a go to see if they have more to offer than novelty pricing and test how their service actually stacks up against their competitors.

Unlike most VPN providers, CactusVPN does not just offer conventional monthly, quarterly, and annual packages. They are far more nuanced than that.

Packages are available for all these durations, but there are five different plans available across each length. These plans are:

The first four of these packages are all priced the same and are currently available for US$3.49 a month, $9.09 a quarter, or $27.29 a year. For those who just want a simple VPN (or SmartDNS) service, this is a pretty competitive price.

The VPN + SmartDNS package is their complete offering and is, therefore, a little more expensive, but only a little. It is currently available at $4.89 a month, $12.59 a quarter, or $38.49 a year. Again, for an all-round package this seems to be a competitive price, but of course, it all depends on the quality of the service they offer, which we will come to in a moment.

Personally, given the relatively small difference in price between CactusVPN’s complete package and its selective ones, I think it’s a no-brainer to go for the bigger deal. Having a choice of just six servers is a limited choice, especially as it is always possible for servers to go down or speeds to vary.

For what amounts to a little over $10 a year extra, the additional options are well worth getting in my opinion, unless pricing is a really decisive factor in your choice.

Once you have made your choice, payment is available via credit card (including American Express) or via PayPal as well as a number of privacy-protecting services such as Webmoney and Qiwi (Avoid Alipay if you can given its links to the Chinese Government). They have also recently added the option to pay by Bitcoin which is another great addition to what is already a broad selection of payment options.

Along with most of their competitors, CactusVPN also offers a 30-day money back guarantee for users who are not totally satisfied with their service. And they also offer a 24-hour free trial which allows you to try their service before you a buy; a real plus and one that is becoming increasingly rare. There is no need to enter any payment details for this trial. All you have to do is register an email address on the site, and they will send you an email with all the details you need.

CactusVPN offers five different VPN protocols, which is an impressive variety. Those protocols are L2TP/IPsec, OpenVPN, SSTP, SoftEther, and PPTP.

I have been using the VPN + SmartDNS package in my testing, which has allowed me to try out all of their servers. You’ll have to keep reading to see how effective it was!

CactusVPN offers software for Windows and Mac OS as well as apps for Android and iOS devices. There is unfortunately not currently a custom client available for Linux. In testing, I have been using the software for windows and the iOS app.

The Windows software is very straightforward to download and use. It has a clean and simple user interface which is easy to navigate and use. The homepage gives users simple buttons with which they can choose which country and individual server they want to connect to, as well as an option to sort servers by speed. 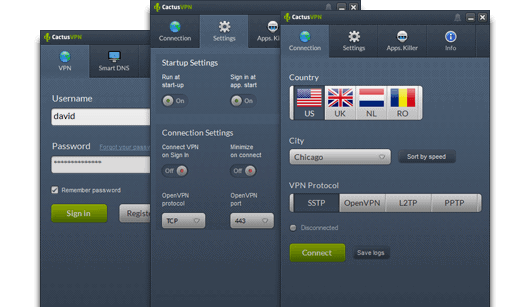 Here you can also choose between the four main protocols – SoftEther requires a different setup, which can be accessed via their website.

The settings tab gives you a series of simple settings options with on-off switches that make it easy for anyone to use. Some of the advanced settings are a bonus too, especially DNS leak protection, which is disabled by default.

There is also a rather nifty AppKiller feature, in a separate tab, which allows you to select which applications on your device you only want to run when connected to CactusVPN. These will be automatically disconnected when the connection to CactusVPN drops.

There is also a tab that lets you connect easily with their support team should you encounter any problems.

Whilst they lack a few features common in their competitors, such as being able to save favourite servers, I found the user-interface a dream to use and their simple design has been made into a real asset rather than anything they could be criticised for.

The iOS app is even more pared back. On logging in you are presented with a list of servers and selecting one then redirects you to your settings where you then have to install a profile (it’s one click, but without prior warning, it comes as a bit of a shock.)

On installing the VPN connection profile, there is no clear indication that the VPN is connected or guidance on what to do next. In fact, you have to go to the VPN page in your settings and manually enable the VPN connection. But that is something I had to figure out for myself rather than something CactusVPN explained to me.

It is, however, possible to connect unlimited multiple devices using the same CactusVPN account, which is a bonus

When it comes to the variety of server locations, CactusVPN is not in the same league as many of its more established competitors.

While it is not unusual for the bigger VPNs to offer hundreds of server connections across dozens of different countries, CactusVPN has just 18 servers located across four countries (6 in the USA, 6 in the UK, 4 in the Netherlands, and 2 in Romania).

This can be looked upon as both a blessing and a curse. For users who want a VPN to access content in other countries other than those four, or who live in another country and want a secure domestic connection, CactusVPN is not the provider for you.

But of course, you do pay more for those extra connections, and by having a streamlined server offering, CactusVPN is keeping costs to a minimum for themselves and their customers.

And of course, 18 servers is more than sufficient for many users. It is enough servers to enjoy all the security and privacy benefits that come with a VPN if that is your priority.

They also offer access to the two most popular markets for content viewing (the USA and the UK) as well as servers in other countries (the Netherlands and Romania) where users can download and torrent freely.

If you opt for a single-location package, you are reducing the number of server locations you are accessing (to either 1 or 2), but again that is sufficient for users who don’t want to access geo-restricted content and who just want the online security and privacy benefits.

So, there is a limited number of servers and server locations available with CactusVPN. It will depend on how you are using your VPN as to whether this is a problem for you or not.

There are no download limits to CactusVPN and they also proudly offer unlimited bandwidth and speeds across all of their servers. This comes with a caveat, however, because if your excess usage is affecting other users, they will apply restrictions to you.

Torrenting is permitted on CactusVPN, but it can only be done on the servers located in the Netherlands and Romania, meaning you have to sign up to either the Liberty package or the total package if you want to take advantage of this.

I have been using CactusVPN as my standard VPN for around two weeks now and I have noticed no obvious difference between my connection speeds with or without the VPN connection.

I have connected to servers in each of their four destinations at different times and again there was no noticeable difference in connection speeds with any of the locations. Being located in Asia at the time of testing, this is especially impressive.

All were able to open web pages fast, download content at a reasonable speed, and also stream videos smoothly.

I ran speed tests on their UK and US-based servers in comparison to my regular connection speed and the results showed there was a small drop in speed, but the drop was negligible and would have been unnoticeable in my everyday usage.

For most of these protocols, CactusVPN makes use of AES-256-CBC encryption.

Privacy-wise, CactusVPN appears to be a good option too. It is based in Moldova, which means it doesn’t have to comply with the intrusive data access laws VPNs located in the US, UK and else are subject to.

It also operates a zero-logs policy and is refreshingly honest about what this does (and doesn’t) entail.

We have adopted Zero Logs policy. That means we don’t keep this type of logs: traffic, DNS requests, timestamps, IPs, bandwidth, connection logs or any other type of logs that can be tracked to a single person.

Combined with their use of shared IP Addresses and this means that it will be pretty much impossible for anyone to work out the individual user habits of CactusVPN users.

But that doesn’t mean your use of CactusVPN will be hidden as well. The company’s privacy policy states that can and will share “registration data or any information about you … it believes necessary or appropriate” if they are faced with “subpoenas, court orders or legal processes”.

It also doesn’t mean that they do not monitor your online activity at all. Their service policy states that they can “block certain kinds of usage to protect other users, to comply with legal restrictions or to minimise the threat or legal action against us or our users”.

CactusVPN does offer a 24/7 customer support facility which operates via a ticketing system either within the website or via email. I tried this out on three occasions and each time the response was prompt, but not instantaneous.

However, there is a wealth of other helpful information on the site too, including tutorials, a comprehensive FAQ section, and a Learning Centre.

They do offer a live chat support facility, which is a great feature many other VPN providers offer, but the CactusVPN one is extremely limited. It is only available from 9am to 6pm CET from Monday to Friday, during which times an icon appears on the website. At all other times, the service is not mentioned or promoted which is a shame as most other providers like to draw attention to what is, for most users, the most helpful support service.

It is tricky to pin CactusVPN down because ostensibly it does do everything a quality VPN should do. But after using it for a couple of weeks, I am still left with a slight sense that something is missing.

The downsides for me are unquestionably the limited number of servers and server locations, the lack of live chat support and a less-than-perfect iOS app.

And yet CactusVPN has plenty going for it as well. Speeds are good and the service is reliable as well. There is also a consistency of service across all servers too.

It’s biggest selling point is undoubtedly the price. It sits at the lower end of the VPN price range and the basic service it offers definitely makes it a cost-effective option.