How to Bypass Traffic Shaping 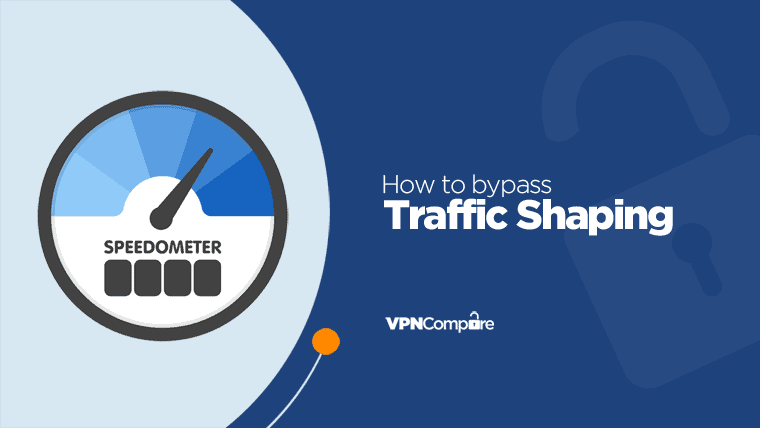 Traffic shaping, it's a funny old term and for those of you unaware it doesn't relate anything to do with cars.

There are no motorways or highways, it's not a way to ease congestion and it isn't going to get you to work any quicker through the rush hour.

So what is it and how can you bypass traffic shaping?

In this guide we'll be answering all that and more showing you exactly how to ensure your internet connection continues to flow freely.

What is traffic shaping?

As the internet has become more widely used and certain services more so than others internet service providers have for the past few years started to limit certain types of activity.

This is happening all over the world on most major ISPs and in many cases it's not even publicly acknowledged.

Some ISPs do make public the main areas that they limit and they tend to fall around certain activity which is deemed heavy usage or at the very least wide usage.

As we start to consume more and more on the internet the amount of data being transferred is increasing, the infrastructure of the ISPs is not always up to the job and to limit the impact over the whole network they restrict these certain (usually popular) activities.

This happens either on a permanent basis or within specific high usage times. These restrictions usually take the form of lowered speeds.

There are plenty of different names for traffic shaping including packet shaping and traffic management, all of which mean the same thing, your internet is restricted in some way.

So if you've ever wondered why your internet connection is slow either in general or when accessing specific services then you're probably being restricted under a traffic shaping policy.

Why is traffic shaping bad?

Traffic shaping on the surface is a good idea, it allows the whole network to flow freely and doesn't let certain types of services impact on the overall user base.

However once you scratch under the surface it begins to become clear that traffic shaping is indeed a bad idea.

One of the main negatives is if you happen to make use of one of the so called popular services and that is your main use then your internet connection is substandard, you're getting less than what you pay for.

When you fall victim to traffic shaping it allows the ISPs to offer a service without the need to upgrade the infrastructure to cope with the demands of it's user base.

In essence it allows them to retain more of the profit from your subscription charges and invest less in to the network, a win for the ISPs but ultimately a loss for the users.

The services that are most often restricted are usually the most popular and they regularly include P2P use, movie streaming and other such entertainment type uses, just because a service is popular doesn't really mean it is fair to restrict that service.

In fact, surely when a service is popular it means it should be given priority due to the high number of users making use of it.

Services such as Netflix, YouTube and other high data usage services are mainly affected by traffic shaping and even if it isn't officially under a traffic shaping policy there are occasions where services like YouTube can suffer buffering and incredibly poor playback.

As far back as 2014 thousands of customers from Virgin Media in the UK complained that YouTube videos were increasingly buffering and becoming unplayable, it wasn't even part of an official traffic shaping policy but still succumbed to some sort of slowdown.

Why should you pay a full price when you're getting less than a full service?

How can I bypass traffic shaping?

ISPs look for tell tale signs of the types of activity you're accessing, when it spots certain markers such as the internet ports the service uses it flags them and it automatically becomes part of the traffic shaping scheme.

The best way to hide what you're doing on the internet is to make use of a service called a Virtual Private Network.

A VPN is a way of encrypting your connection from your own computer to the servers of the VPN provider which means as the data travels via your ISP it is fully encrypted and from a traffic shaping perspective your ISP is unable to ascertain what type of services or data you're transferring.

In a nutshell your usage becomes invisible in the sense that you could be downloading hundreds of gigabytes of movies from P2P networks or watching a thousand fluffy cat movies on YouTube.

When using a VPN there is no difference in your data use.

Due to this lack of difference it is impossible for your ISP to place any of your activity under it's traffic management schemes.

All they see from their end is a permanent encrypted connection from yourself to the VPN server and what is going on inside this encrypted tunnel is off limits to their eyes and impossible for them to decrypt.

VPN services are provided by a range of providers all over the world, generally to bypass traffic shaping you'll want to use a server that is either in the same country as yourself or in a neighbouring country, this way you are likely to receive pretty much the full speed of your connection with as least speed loss as possible.

Lastly consider what traffic shaping you're trying to bypass, one of the better providers is ExpressVPN for general traffic management bypassing including if you're downloading from torrents or newsgroups.

A couple of other good choices to check out include NordVPN and CyberGhost VPN.

There are a range of the best VPN providers listed in our VPN Comparison Guide but three we recommend for a variety of traffic shaping bypassing needs are :-

Once you've signed up and connected to a server close to your location you're free to use the internet without restriction.

Also without the fear of having your traffic managed, shaped or whatever other nice term they want to stamp on the fact they've slowed the internet you're paying for.