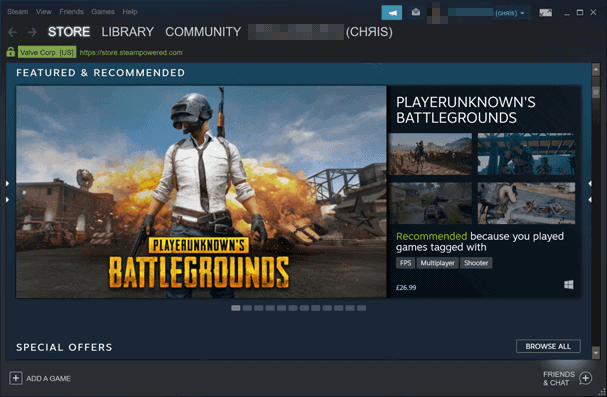 In this guide I’ll be rounding up the very best VPN services for use with Steam.

If you’re a gamer and a PC gamer in particular then you’ll know how important every ‘ms’ is on your ping. Especially if you’re an FPS gamer or play any game that requires you to react quickly to the action.

Using a VPN is going to add latency to your gaming experience, this goes without saying. However, by choosing the correct VPN you can be sure this is kept to such a minimum that it will barely make a difference to your reaction time.

It may even improve your gaming sending your data down faster routes or avoid slow bottlenecks to the server you’re playing on.

I’ve been testing a whole host of VPN providers with games on Steam such as PUGB, COD, CS:GO and a whole host of different MMORPG’s to find out which VPN is the best for Steam gaming. So let’s find out.

For gaming on Steam or any other system such as Origin, you should definitely check out ExpressVPN.

I found them to be one of the fastest VPN providers with the most reliable connections. When gaming this is absolutely critical because the last thing you want is your connection dropping mid-game.

With well over 90 countries on offer, ExpressVPN will even allow you to connect to servers around the world and play in different regions. You can also unblock and play games restricted to specific regions or activate games early.

I found their no-nonsense Windows and Mac apps to be simple to use allowing you to get connected quickly and easily and forget about it. This lets you get on with the job of gaming without being bogged down. There are also mobile apps and an app for the Amazon Fire TV Stick if you want to take a break from gaming.

EXCLUSIVE OFFER: Save up to 49% today!

Get ExpressVPN for Steam

Use on 10 devices at once
Beginner-friendly

IPVanish has been in the VPN game for a long time which means they’ve definitely locked down a good service.

One of the most exciting features is Steam is actually a customer of IPVanish’s owner, Stackpath. The partnership means that some of Steams CDN is handled by Stackpath.

You really couldn’t get a closer connection between a VPN provider and Steam themselves. If you want those added ms shaved off your game then IPVanish is certainly worth considering.

There’s a 7-day money back guarantee on the service and although that’s a little short in comparison to other providers it will give you enough time to test it risk-free.

What’s most impressive is you can use one account on up to 10 devices at the same time. This allows you to protect your Steam gaming plus other computers, tablets, phones, Fire TVs and more.

Get IPVanish for Steam

NordVPN have been expanding a lot over the past few years which has led them to have well over 5000 individual VPN servers. If you’re looking for a server that isn’t overcrowded to give you that speed advantage when gaming then NordVPN is it.

Their apps are some of the easiest to use I’ve seen with the best interface. Just click to connect, minimise it and get your frag on.

I dislike the fact NordVPN add VAT for EU customers although that’s somewhat unavoidable on their behalf. This adds to the price and you won’t find that from some of the other leading services.

There is, however, a huge 30-day money back guarantee to give you time to test the service without risk.

Get NordVPN for Steam

CyberGhost VPN is another provider that has expanded rapidly in recent years catapulting them into being one of the best VPN services for multiple purposes.

While they don’t have a dedicated gaming option you can select a country and even a specific server individually. If you find one server that works great for Steam then you can continue to connect there in future.

In an industry first, CyberGhost VPN has a 45 day money back guarantee allowing you to test the service for over a month and a half which gives you plenty of time to see it working with Steam and decide if it works for you or not.

Get CyberGhost for Steam

Something a bit different

Connect 6 devices at once
Fewer users

If you want something a bit different from the norm then VPN.ac is where you should look.

They don’t have quite the server numbers that the other providers have which means they won’t be suitable for everyone. You’ll need to check out their server locations first to see if that matches with your gaming habits.

Although VPN.ac is considered a “small” provider their service is anything but. For gaming you’ll get better latency shaving ms off your ping and excellent security provisions. Not only is it a great VPN for Steam gaming but it’ll also protect your privacy at the same time.

What to consider when choosing a VPN for Steam

Choosing a VPN for any purpose is difficult enough but when you throw in the Steam factor it’s made even more difficult.

Important features to consider when choosing a VPN for Steam gaming are:

Everything to do with multiplayer gaming rests on speed. Choose a slow provider and you’ll be plagued with a poor connection that will result in more deaths or slower reactions to the game.

For this reason it’s critical you choose a provider with fast speeds and a lengthy money-back guarantee such as ExpressVPN or NordVPN.

You’ll be able to check how their speeds impact your Steam gaming over a long period of time and if you’re unhappy with the result then get a refund.

Will VPN use affect my Steam gaming?

It’s the million dollar question and one that a bad guide will answer “no”.

The truth is any VPN is going to introduce some speed loss but by choosing the correct VPN you can minimise that speed loss.

A VPN can in specific circumstances actually improve your gameplay. If you suffer from poor routing then it’s possible by sending your data via a different route that you get an improved connection to the server you’re playing on.

If you play Steam games which find you victim of DDOS attacks then a VPN will mask your IP Address when gaming to ensure no one can discover your true IP. This is especially useful when using VOIP services.

Above I’ve rounded up my Top 5 VPN services for Steam gaming. Choosing any will be suitable for most needs.

There are somewhere in the region of 500 commercial VPN providers and the quality of them varies. I tested the 5 above with all kinds of Steam games from PUBG to WoW and everything else in between.

My recommendation is you should use ExpressVPN but others like NordVPN, CyberGhost VPN and the other listed all make great choices.

Now all you have to do is sign up and enjoy VPN protected Steam gaming.

Get my recommended VPN

What’s your reason for using a VPN when gaming? I would love to know so why not post in the comments section below?