Home » Guides » 5 Best VPN review websites that you can trust

5 Best VPN review websites that you can trust 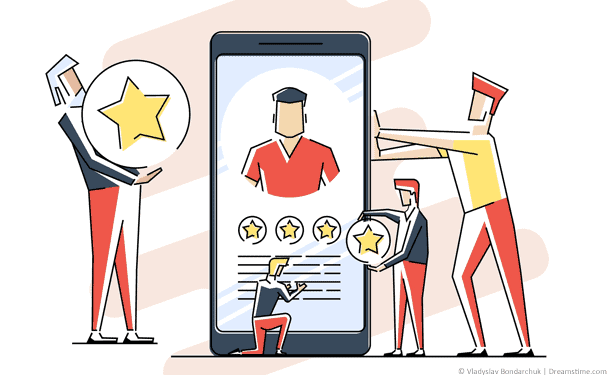 Choosing a VPN seems almost impossible, but knowing which VPN comparison websites to trust has become even more of a minefield.

In this article we'll be exploring the trustworthy ones and helping you avoid the more sketchy sites.

The growth of online threats, surveillance, geo-restrictions, censorship, and similar issues has forced many to seek out VPNs to remain safe online.

As a result, many VPN review websites emerged as well, trying to answer this question for the users.

However, even here, it is hard to know which one is trustworthy. Some review sites are new, others are long-standing, but you never know whom to trust.

So, today, we will be rounding up our pick of what we consider the most reputable VPN review sites.

Finding a trustworthy VPN review website can be as tricky as finding a reliable VPN service.

Below are our top five picks of sites you can trust to give you the unbiased information you seek. 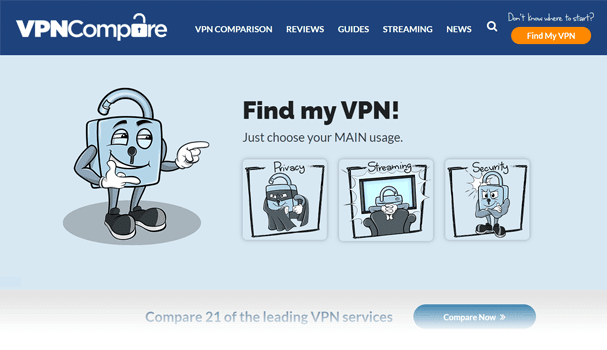 OK, we may seem a little biased here, but there are plenty of good reasons why we rate ourselves as the top resource for VPN information.

It will undoubtedly provide you with more than enough information that will help you choose a good VPN provider. We cover all kinds of VPN reviews, various tutorials, as well as specific VPNs for specific purposes. The amount of information itself makes it more than worthy of getting on this list.

We are also one of the original VPN comparison websites running for over seven years having started back in 2013 way before many newer sites appeared. 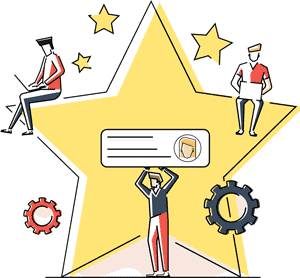 Our authors put their name to their work so our reputation is at stake and it would be impossible to survive so long without being transparent and honest.

VPNCompare has been quoted, featured and mentioned in many respected international organisations including The Guardian, The Independent, The Week, BBC's Click, Wired, China Uncensored and more.

We are an independently owned VPN resource and are not owned or do not own any VPN service itself. Our research is funded by affiliate payments, which are detailed in our easy to locate disclosure. 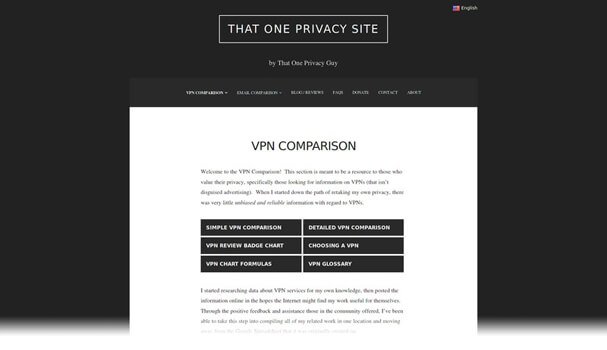 Sadly, the once champion of affiliate free VPN comparison can no longer be recommended.

In late 2020, ThatOnePrivacySite partnered with a little known website called SafetyDetectives. While the site looked very similar to another large VPN review website called VPNMentor, no link was immediately obvious.

Initially this shouldn't have been an issue.

As ThatOnePrivacySite is now hosted on a website owned by a large corporation who also own VPN providers we can no longer recommend their list.

We have been alerted to a new community driven project by r/VPN on Reddit. However, the impartiality of this could be questionable. r/VPN does not accept posts, reviews or news that link to VPN providers that contact affiliate links.

Affiliate links are those which earn the referrer commission.

However, the author of the community project post is also the same which posts VPN coupons. At least one and possibly more of those links contain affiliate codes earning commission for the author.

While we have nothing against websites or services that monetise their projects in this way (our own website does), it should be made clear. It should also not be allowable for a moderator of r/VPN to monetise where other posters have not been able to for more than 7 years.

An interesting new project, but one with caution. 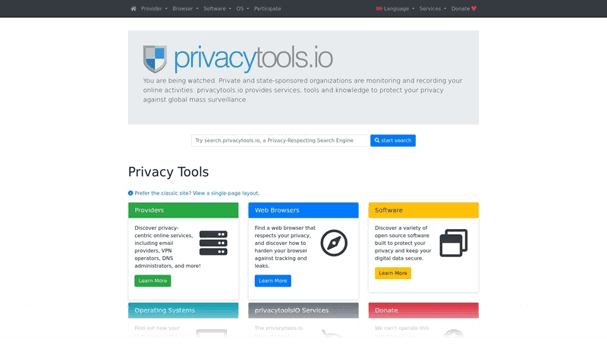 When it comes to PrivacyTools.io, this is another well-respected website that will provide you with numerous reviews, comparisons, and alike.

Its reviews are known for their quality of information and in-depth look. It is also ad-free, which is always a good thing when it comes to online services.

It is also quite clear, and it provides explanations that are helpful, informative, and easy to understand. Another thing to note is that there are no affiliate links on this website either, which is something to keep in mind.

VPN coverage is a little thinner than dedicated sites because they cover a range of privacy tools.

So while you won't find specific guides like how to access iPlayer overseas or other streaming services, it is great for staying secure in other areas too and finding a free trial of different privacy apps. 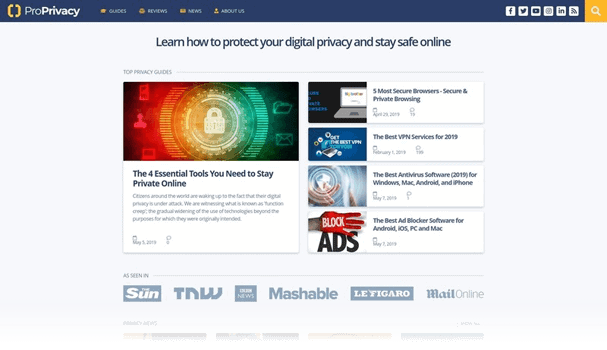 Then, there is ProPrivacy, which is one of the longest-running comparison websites on the internet, at least when it comes to VPNs. This website was formerly known as BestVPN, but it changed its name more recently.

The site also made a surprising move by buying a VPN service.

The service in question started to be highly recommended on their site which caused a conflict of interest. However, once this came to light, it was promptly rectified and no longer features so heavily across the site.

While some may question their impartiality, especially in respect to the service they own, it goes without question that this is a monster resource for VPN information and user friendly to navigate so is well worth bookmarking. 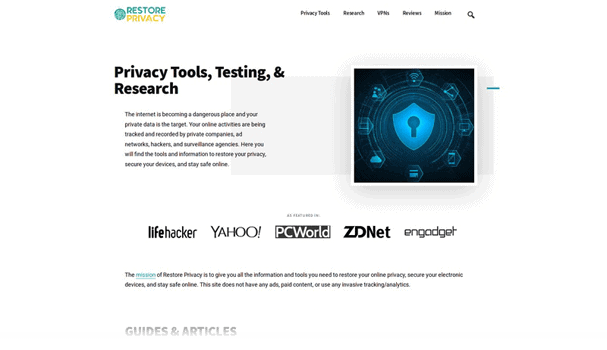 Finally, we have RestorePrivacy, which is filled with all kinds of reviews of security technologies, including VPNs, secure browsers, ad blockers, Tor, secure email, and more.

It is a good website with quite a lot of content and multiple different reviews, although it seems to stick to the most popular ones, such as ExpressVPN, NordVPN, CyberGhost, IPVanish, and alike.

It also recommends the best VPNs for various purposes, such as torrenting and more.

What to look out for on VPN Review websites

Finding a good VPN comparison or review website is a difficult task.

You go to them to get the best possible insight into VPNs, and you end up having to research the service that recommends them to find out whether it is trustworthy or not.

However, this is a necessity, as there are many VPN review websites out there that are owned by VPN providers.

You can recognise such websites relatively quickly, as they always recommend the same service for all kinds of things. 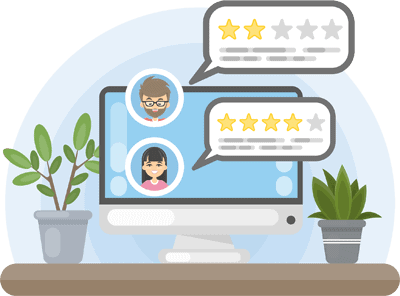 Whether it is for watching Netflix, Gaming, having the fastest speeds, having the best security, using a VPN in China, they recommend the same service. One service cannot see to every need, and that is simply a fact.

It's one reason why you'll find services like little known 12VPN recommended for China or VPN.ac as one of the best privacy services this year on our website. Providers you won't see mentioned on other sites.

There are also VPN review sites that bought a VPN service or started one themselves and then recommended them – if no other place is recommending that service, ask yourself why.

Are all VPN review websites untrustworthy?

Many VPN review websites might try to abuse your trust and convince you of one thing or another. Even so, there are those that can be trusted.

VPNCompare is a good example.

As mentioned earlier, this website has been around since 2013, which makes it one of the longest-running VPN review websites. These were the days when VPNs started seeing more demand, and VPNCompare responded by beginning to publish its reviews.

Since then, it attracted millions of readers who have been pointed in the right direction for the correct VPN for their needs. However, as we always recommend, the ultimate choice is yours.

We test all kinds of VPNs, and publish the findings reporting on specifics such as the number of servers, if the service has kill switches or not, if you can use unlimited devices, where the server locations are and more.

Not only that, but the authors of these reviews put their name in their reports, thus putting their reputation at stake if their reviews turn out to be misleading.

What about affiliate commissions?

As you undoubtedly know, websites need to make earnings to continue their existence. VPN review websites are no different, and most of them earn affiliate commissions if you sign up for a VPN through specific links.

Some websites will even push you to sign up to make a profit. They will also ignore all the negative sides of a VPN in an attempt to make it seem like the best option. 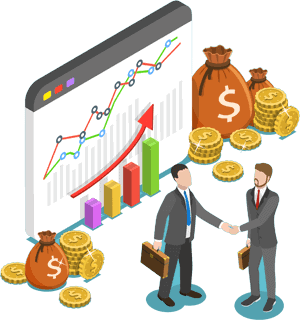 VPNCompare does not do this, and it has positive and negative reviews alike.

We don't always use affiliate links when recommending a particular service but when we do you can be sure it's the best service for the job and you're helping fund the continuation of our work.

It is hard to stay safe online, and even harder if you cannot trust review websites.

VPN review websites are no different from any other review website and they need to be trustworthy. They provide you with information that might put your privacy in jeopardy if it turns out to be wrong. Because of that, you need to know for sure which can be trusted.

Hopefully, you will find your answer on our list, but it is also best to do your research and ultimately come up with your conclusions by trusting your instinct.