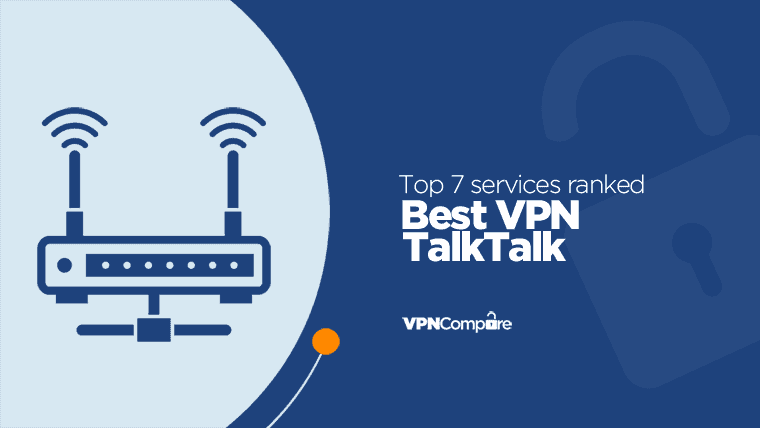 In this article I'm taking a look at VPN services suitable for use with TalkTalk.

If you've got a TalkTalk subscription in the UK and you're looking for a VPN service that works well, then it can be a lengthy and challenging process.

There is just so much choice out there and knowing which to choose is almost impossible.

Over the past few months I've been testing many different VPN providers to see which worked best with TalkTalk.

I tested speed, quality of service, reliability when using with TalkTalk and delved deep into the individual options on offer from each provider.

Below are my findings. If you've got TalkTalk then simply sign up to one of the providers below, I found them to be the best out there.

If you're looking for the very best service for use with TalkTalk, then ExpressVPN with one of the biggest VPN networks in the world that has servers in 94 different countries and 145 different cities is where you should start.

If protecting your privacy is the key reason for you using a VPN, then the vast location list will allow you to tunnel out of the UK to nearly any other country.

With such an extensive list of locations, you'll also be able to access content from other countries while connected to TalkTalk and using the ExpressVPN service. So if you want to access different regions of Netflix, Disney+, Amazon Prime and more, you're well covered.

Software and apps are available for all major systems plus the addition of a Linux client for Ubuntu so if you use Linux, then you'll appreciate the support.

There is zero-logging on the service that means what you do while connected remains private and no history of your actions is kept. This has been audited by a third party and confirmed true.

If you're looking for a reliable service that works well with TalkTalk, IPVanish should be on your list of considerations.

After extensive testing, I found them to offer extremely favourable speeds.

There are 4 locations across the UK including London, Manchester, Birmingham and Glasgow. Having so many local access points allows you to get the best possible speeds.

Software is available for Windows and Mac desktop and laptop computers with apps for Android and iOS, so your tablet and mobile devices can be easily secured.

All the major UK streaming services such as BBC iPlayer, Sky Go, BT Sport and more work with the service so if you go abroad, you can access them. Or if you want to protect your privacy, you won't need to disconnect to watch those services.

If you're new to VPN use and you just want to get a service to use and forget about, then VyprVPN should be the first you look at.

The service works well with TalkTalk and the apps and software are some of the simplest I've come across. Fire up the software or app, hit connect and it will connect you to the fastest server.

You can then just forget about it and go on with your daily routine.

You can of course manually choose another location to connect to but it's the most beginner-friendly I've tested.

VyprVPN recently became a completely no-log VPN provider which is great if you want to surf the web securely without any records of what you've been doing being retained.

There is no longer a 3-day free trial but they do have a 30-day money back guarantee which is useful for risk-free trying.

NordVPN is one of the most popular VPN services worldwide and it's also great when using with TalkTalk.

They've got apps for all major devices including the likes of the Amazon Fire TV so whether you're browsing the internet and sending emails or streaming high-quality video to your TV, then you'll be covered.

Using the VPN from NordVPN will stop pesky hackers from snooping on your internet connection and allow you to avoid government snooping such as the Investigatory Powers Act.

The price is highly competitive, especially if you sign up for one of their two or three year packages and it's even good value if you just choose a year.

They unblock most major services including everything from Netflix to BBC iPlayer, so there's no trouble streaming your favourite services while staying secure.

CyberGhost is another excellent choice, and its server network is one of its greatest strengths.

This service offers more than 6,200 servers in about 89 countries. As such, it is more than capable of unblocking pretty much anything in the UK.

It features 528 servers in the United Kingdom alone, but also in surrounding countries. For example, there are 36 others in Ireland and another 490 in France.

With such coverage, CyberGhost is more than capable of unblocking most if not all UK TV services.

Naturally, CyberGhost also shines when it comes to its other features, particularly its ability to provide privacy and security. However, the thing that makes it stand out the most is its 45-days money-back guarantee.

Nearing the end, we have Surfshark, a very privacy-friendly VPN that has excellent features for hiding in plain sight. This also allows it to unblock all kinds of content everywhere in the world, including the UK.

Surfshark has more than 1700 servers in 63 different countries, which is particularly impressive since the company is only two years old. It also offers servers in Ireland, France, Spain, Belgium, and several other nearby countries.

As mentioned, Surfshark is great when it comes to unblocking content, and that also includes the UK TV. In can also unlock a massive 16 different regions of Netflix!

There's a 30-day money back guarantee and they claim to store no logs, however, they haven't been audited to that effect which may put you off a little.

However, its biggest strength is the fact that it lets you use a single license on an unlimited number of devices. 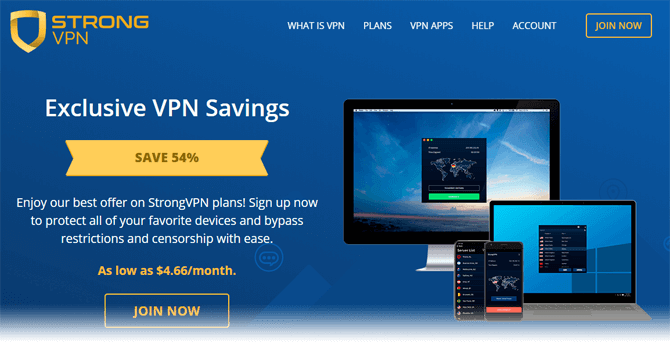 StrongVPN has a lot fewer servers than all the other providers in this guide but don't let that put you off… and I'll tell you why.

As a TalkTalk customer, you're likely to connect to UK servers the majority of times to give you the best possible speeds. StrongVPN has six UK locations – more than any other provider.

Like the other providers, they have software for PC and Mac and even apps for mobile devices using Android or iOS. So even though they have less worldwide servers, they are still feature-rich.

The mobile apps are really easy to use and they've redesigned the desktop apps to match getting rid of their old clunky functionality.

There is now a 30-day money back guarantee and they allow up to 12 devices to be connected concurrently which is excellent.

How to choose a VPN for use with TalkTalk

The above seven choices are the leading options when using with your TalkTalk service.

After extensive testing of a wide range of available services, they offered some of the highest speeds and most reliable connections.

If you don't have time to be searching about then just selecting any of the seven will be fine.

The UK has in recent years become a big brother state.

What you do, view and say online is monitored and can be recorded. TalkTalk is bound by such regulations.

Even if you're a law-abiding citizen, whole swathes of data can be logged allowing government bodies to build a profile of what you like and dislike.

Using one of the VPN services above will allow you to step outside this regulation and protect your TalkTalk connection from being monitored.

Many websites in the UK are now blocked.

This can range from whole websites such as torrent sites all the way through to simple videos intended for other regions.

By using one of the seven VPN services above, you can send your TalkTalk internet connection via another country and access websites, videos and more than are blocked in the UK.

If you like to watch overseas TV such as US dramas, Nordic thrillers or any other type of TV from outside the UK then one of the VPN services above can let you access overseas TV services.

If you visit an overseas website such as CBS from the UK directly on your TalkTalk internet connection, you're blocked from viewing.

By using a VPN and connecting to the country the TV service is from you can stream all your favourite overseas TV shows easily.

Can I install a VPN on the TalkTalk Wi-Fi Hub?

The TalkTalk Wi-Fi Hub will not allow you to do this, so you will be limited to only using a VPN on each individual device. This is fine but can be inconvenient if you want to protect multiple devices without connecting them all individually.

However, there is another option, which would be to use an Invizbox 2.

This is a small VPN router that can be used to connect to the TalkTalk Wi-Fi Hub. Think of it as a small addition to the primary device, that will protect all your browsing with ease.

On top of that, it offers speed, security, and privacy for everyone, as it encrypts any devices connected to it. With this router, you will not have to use a VPN on individual devices, at least not while you are browsing from home.

Some of its features include:

We took a look at the device recently so check out our Invizbox 2 review for more details.

Why won't my VPN on TalkTalk connect?

There could be several reasons why you are having this kind of trouble. As for potential solutions, the easiest and most likely is the need to disable ‘Kid Safe‘ or perhaps ‘Home Safe.'

These are two services enabled to protect younger children or teenagers from harmful web-content, but if you don't need these, they could be interfering with your VPN connection.

You can disable these by following these steps:

You should then try to connect with your VPN again.

Why you need a VPN in the first place

One reason why using a VPN is a good idea is throttling.

Throttling is an activity that internet providers tend to do, which impacts your internet speed and reduces your capabilities. They do this if they catch you carrying out tasks that use a lot of bandwidth. These usually include things like downloading or streaming.

Most would never admit to doing it, but we know for a fact that Talktalk has definitely used throttling in the past.

Back in 2014, TalkTalk was found to be throttling speeds to an image sharing website.

Can TalkTalk see what I'm doing?

About ten years ago, TalkTalk was caught monitoring users' activities, which caused a major uproar. However, the company made a statement that said that this was for development purposes and that it doesn't aim to violate anyone's privacy.

Since then, it is believed that the firm has stopped doing it, especially now, when privacy laws are getting stricter by the year.

However, UK laws may require ISPs like TalkTalk to retain a record of the name of every website you've visited in the past 12-months.

By using a VPN they wouldn't be able to do this as the websites your visiting become hidden.

Choosing a VPN for any purpose is difficult but picking one specifically for TalkTalk can be a lengthy process.

Signing up for multiple VPN services can also get expensive.

After testing some of the most popular services recommended across the web I settled on ExpressVPN, it works wonders with my TalkTalk home Faster Fibre + Speedboost package.

If you've got time, it's worth visiting a few of the recommended services to compare their features directly. If you don't have time you can't go wrong with ExpressVPN and if you do, there's a massive 30-days to get your money back.

Which VPN services did you end up getting and how did you find it? I would love to know so pop a comment below and let me know.