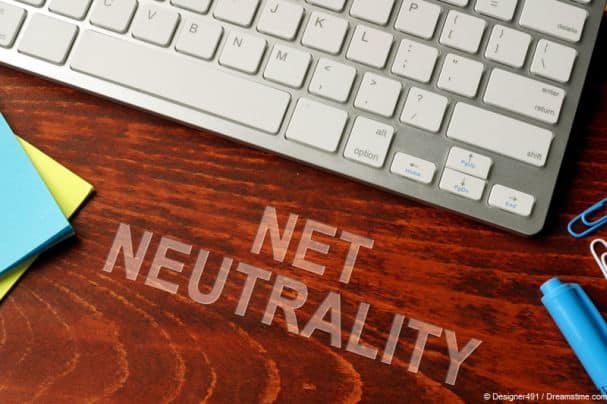 Net Neutrality is dead in America!

If you’ve been keeping up with social media and the news in the US then you’ll know that Ajit Pai of the FCC has revoked Net Neutrality.

This paves the way for a two-tier internet. One fast lane for companies who can afford to pay telecoms companies to handle their traffic in a faster manner and another who can’t afford to pay who will be left lumbering in the slow lane.

We’ve been looking at the Best VPN for Net Neutrality so you can keep an open and free internet, not just in the US but wherever you are in the world.

If you want to keep Net Neutrality then IPVanish should be your first port of call. They own all of their own hardware which means their VPN servers can’t be interfered with by others.

IPVanish is owned by Highwinds which in turn is owned by Stackpath. This is important when it comes to Net Neutrality because Highwinds is a CDN company which makes them experts in networking and getting data where it needs to go fast and via the best possible route.

According to Fortune, Stackpath had access to $180 million of funding at the start of the year which means they’re well placed to invest in infrastructure and networking.

IPVanish has VPN servers in over 60 countries across the world with 18 different cities in the United States alone.

If you want to keep your net neutral then we recommend IPVanish.

Net Neutrality is confusing enough without throwing in a “VPN”, especially if you’ve never used one. This is where ExpressVPN comes in. They have a full 30-day money back guarantee that lets you test the service risk free.

This will give you time to get used to using it and see how it can benefit you in the fight for Net Neutrality. If you’re unhappy, simply get a refund.

ExpressVPN also benefits by being registered off-shore which means they aren’t bound by any laws set in the United States. It gives them a little more room for manoeuvre when selecting server locations.

Extended server choices
Simple to use
Speeds variable across servers

NordVPN have expanded in the last few years to become one of the biggest names in the industry. Their service can definitely help you retain Net Neutrality in the US or elsewhere in the world.

The service has one of the biggest server counts of any service with more than 2380 servers spread across 56 countries.

The apps for mobile devices and computers are incredibly easy to use so if you’re a newcomer then you’ll be eased into VPN use to retain your net neutrality with their helpful app and software suite.

There are even servers for specific needs and if you’re still struggling their apps will even suggest the best server for your needs.

If that wasn’t enough there’s a 30-day money back guarantee.

CyberGhost VPN have developed their apps and software to help you connect quickly to the best server for your needs. In the case of Net Neutrality, this will often be the server nearest to your location.

VPN servers are available in 52 countries across the world including the United States.

The service is another which is incredibly easy to use and the software and apps are designed in such a way that it helps you get connected based on your usage. You can of course connect to individual servers too if you know what you’re doing.

CyberGhost VPN store no logs of what you do while connected to their service, there’s a 30-day money back guarantee and you can use it on up to 5 devices at the same time.

Extremely cheap
Millions of customers
Not many server locations

Private Internet Access is the wildcard option of the 5 listed providers. They offer one of the cheapest VPN services available, especially with their new 2-year package which works out at only US $2.50 per month or approximately £1.86.

Their service does exactly what their name suggests, keeps your internet access private. This is great for Net Neutrality reasons because it means no one but yourself knows what you’re accessing making it impossible for your ISP to slow your traffic based on what you’re doing.

Private Internet Access only have servers in 25 countries so they’re not quite as big as some of the other providers but they do have a good selection of VPN servers across US cities and many other major countries.

They do however have many servers in the countries they do cover. At the time of writing they had more than 3111 VPN servers.

What is Net Neutrality

Net Neutrality is a phrase that is thrown around regularly, but unless you stop to understand the term it can be a little confusing.

Traditionally the internet has been a neutral service. This means no matter what you access it gets served to you without priority. In a nutshell this means you get it at the same speed as anything else.

Watch a video, read a website, send an email, it will all be sent at the best possible standard speed.

Removing Net Neutrality basically means a two-lane internet. Imagine it like a motorway. A fast lane for those companies who can afford to pay to have their data sent quicker and a slow lane for everything else.

Why is removing Net Neutrality bad

Removing Net Neutrality like what is happening in the United States is bad for many reasons, but mostly because it can stifle innovation.

Big corporations with deep pockets can afford to have their service sent quicker than smaller start-ups who don’t have the funds to pay for such benefits.

You could essentially have a better service from a small outfit that can’t compete because a lesser service owned by a large corporation can afford to have their service supplied faster.

How can a VPN protect my Net Neutrality

With the internet being offered in two lanes it means your internet provider (ISP) will need to determine what type of traffic you’re accessing.

Can’t they just put VPN services in the slow lane

Definitely. While it’s unlikely they would put all VPN services there is a possibility.

However, with VPN services being relied on for big business it’s unlikely to happen. It’s also possible that large VPN providers could pay to have their traffic in the fast lane which would mean everything you do goes via the fast lane.

As the revoking of Net Neutrality is quite a recent development there is little information about how it will play out and affect your internet access.

However, the best way to defend against this is to get a VPN service now which should future-proof your internet access.

Can I use a VPN on my mobile device

Yes. All the VPN services listed above offer apps for mobile devices.

This means if you have an Android or iOS phone or tablet then you’ll be able to download the VPN provider app from your app store and connect with ease.

This will allow you to retain Net Neutrality across your mobile device as well as your regular desktop or laptop computer.

Certainly. A VPN service creates a secure tunnel from your device to the server of the VPN provider.

All your ISP will see is encrypted data passing between you and a third-party server. It’s impossible for them to understand what you’re accessing while connected.

This means they can’t determine if you’re watching video or downloading files. Anything you read, watch or download remains private.

This secure tunnel is how a VPN allows you to retain Net Neutrality.

How do I get a VPN for Net Neutrality

Getting a VPN to protect your Net Neutrality is really simple.

That’s all there is to it! Now just select one provider from above and sign up.