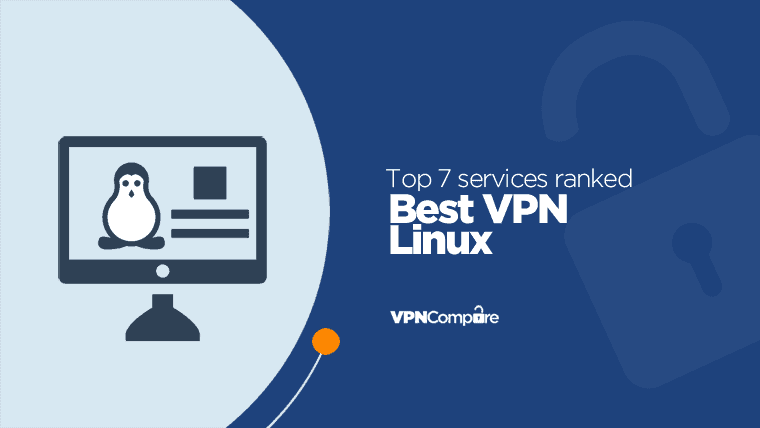 When I first started in the VPN industry, finding a provider that was suitable for Linux was almost impossible.

Although you could certainly set-up the service yourself, there were practically no providers that offered simple solutions to get connected.

Thankfully that has all changed and with the popularity of Linux systems rising especially with the introduction of Linux Mint, VPN providers have sat up and listened. Now there are some excellent solutions out there.

It still isn't perfect though and finding a provider that proactively supports Linux can be a difficult task. It's like finding a needle in a haystack.

Finding a provider that supports Linux, coupled with a good service is even more difficult.

I've been taking a look at the leading VPN service for Linux systems and testing them. Below are the top seven I discovered.

So if you're a Linux buff, keep scrolling to find out which you should be considering.

ExpressVPN is considered one of the best VPN services in the industry for a variety of reasons, not solely for Linux use.

In terms of privacy and security features, this service is at the very top, with the strongest encryption, most robust security protocols, and numerous additions like a kill switch that will prevent data leaks.

It also has a major server network with over 90 locations covered that allows you to hide your identity, bypass censorship, and more.

It is especially good for Linux users as it supports Ubuntu, Raspbian, Arch, Debian, CentOS, and Fedora.

It features a very user-friendly command-line interface, and it is intuitive. 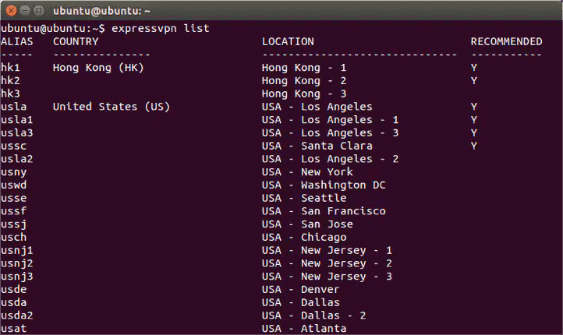 It even features a 30-day money-back guarantee, which will let you get your money back regardless of the plan you take so it is entirely risk-free too.

Our Recommended Choice for Linux

VyprVPN recently made a significant push towards supporting the Linux market by releasing their beta command-line interface clients for both Ubuntu and the ever popular Linux Mint.

The CLI is currently in beta form but will certainly be enough to make a simple connection and get you secure while using their service.

VyprVPN is a firm favourite amongst many VPN users and it's easy to see why. With an ever expanding VPN server list including over 50 countries and more than 200,000 IP addresses, they've certainly got options for you.

The service finally did away with their free trial, so that's no longer possible but they are now offering a 30-day money back guarantee. They've also made their packages much easier to understand… and cheaper!

Next up, we have Private Internet Access, or PIA – another VPN that is a worthy choice for Linux users.

PIA is also known for having low prices, even though it is a very old and reputable VPN service. It's worth noting they're now owned by KAPE, the owners of CyberGhost VPN and one or two others.

They've been expanding in recent years and now cover a vast 48 countries with over 3,330 servers. However, some of these are ‘virtual locations‘.

Meanwhile, it has strong security and privacy features, and it lets you connect with up to 10 devices at the same time. With it, you can protect your identity, unblock censored content, and much more.

In the fourth spot, we have NordVPN – a well-known VPN that has a specific NordLynx protocol, explicitly created so you can use Wireguard with Linux. This is a huge bonus!

With it, you get to stream, browse and more safely.

NordVPN is also user-friendly, and it is likely the easiest VPN to start with on Linux. Simply install the app, enter your login information, and pick a server. That's it. 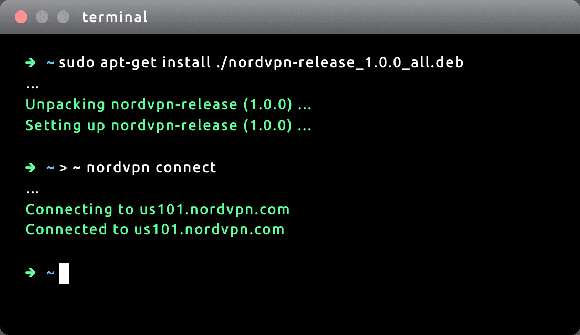 Nearing the end of the list, we have AirVPN, a service that is an excellent choice for OpenSUSE, Debian, Fedora, and more.

With this service, you can be sure that your activity is not being logged, and you can use it to hide your IP, perfect your security on the internet, and prevent anyone from eavesdropping or tracking your content.

AirVPN allows unlimited bandwidth, but there are only 220 servers in 20 countries. This is fewer than most others so be sure to check they're suitable for your needs.

The service is geared more towards advanced users so if that's you, then they may be the service you need. However, if you're a beginner or more intermediate user, you'll want to look elsewhere.

There is a short 3-day service which will give you enough time to see if they're suitable for you.

Lastly, we have Surfshark.

This VPN only supports Debian and Ubuntu, but if you need it for one of these, it is an excellent choice. They're a relatively new provider, so it's encouraging to see them supporting Linux from the get-go.

It is user-friendly, it features a strict no-logs policy, and it is registered offshore in the British Virgin Islands.

As with the other providers they've got the standard 30-day money back guarantee to allow you to test it with your system.

HideMyAss is possibly the largest VPN provider on the planet in terms of public awareness. It's almost impossible not to of heard of this industry mammoth.

That said HMA is one of the longest standing providers that have offered Linux support which makes them an ideal choice if you're a Linux aficionado.

HideMyAss offer one of the most complete GUI applications for Ubuntu. If that doesn't suit you, then command- line interface software is available for PPTP, L2TP, and even OpenVPN protocols.

On top of the software support, there is also a rather in-depth knowledge base available covering topics like IP Binding and also how to set-up using the OAST tool amongst other useful guides.

They do have a little bit of a murky past in relation to logging but now claim they're a completely no-log service. If you can see past their historic misdemeanours, then this could be the service for you.

Why you need a VPN for Linux

You might be thinking – Linux is much safer than Windows, why should I use a VPN in the first place?

The thing is, the type of protection VPN offers has little to do with the security of the system.

Here are some of the main benefits of using a VPN with your Linux device:

If you use the internet without a VPN, the data travelling between your device and a server that supports the website you are visiting can be viewed by all kinds of online entities.

The government, hackers, advertisers, websites themselves, and many others that monitor online traffic for who knows what reason.

With a VPN, you can shield your data flow and encrypt it, which will let you maintain your privacy and stop almost anyone from conducting surveillance.

2. Gain a small degree of anonymity

This is another way for you to get exposed to the internet. However, with a VPN, you can connect to a local or overseas server and get a new IP address, which is tied to the server you are connected to.

It will direct anyone who is watching to the location of a server instead of your own, and so your real identity and position will be known only to you.

We would stop short of saying you'll achieve full anonymity as this mostly depends on your actions and what other precautions you take.

PrivacyTools.io says “Using a VPN provider will not make you anonymous, but it will give you better privacy in certain situations” (Source).

By connecting to foreign servers and masking your IP address, you appear to be located elsewhere, that much we already explained.

However, a beneficial side effect of this is that you will also get full access to all the online content available in the region you have connected to.

This is very useful if you connect to another country and want to access its online services, which are otherwise censored or geo-restricted.

One example of this is accessing the US Netflix catalogue, for example, which can have a lot more shows and movies than you can access in your own region.

Employees often have to access the company's resources while travelling or working from home, and doing so without a VPN can expose your firm, either to competitors or online criminals.

All it takes is a simple VPN connection to retire such concerns completely, and be able to work from anywhere, even if you were to connect to extremely unsafe public Wi-Fi.

The VPNs we mentioned above all support Linux Ubuntu, and so anyone of those should serve you ell if you are Ubuntu user who wishes to protect themselves.

Our top choice is ExpressVPN, but they all have money back guarantees, so you're free to try and get a refund if you find it's not for you.

Some other options also include Mullvad, TorGuard, Windscribe and ProtonVPN.

What's the best for Linux Fedora?

If you are a Fedora user, you would want to go for ExpressVPN, NordVPN or AirVPN, but also providers like IPVanish, HideMyAss, StrongVPN, and VyprVPN.

All of these support Linux Fedora and are counted among the top services in the VPN industry.

Negatives of using a VPN with Linux

When it comes to the downsides of using a VPN with Linux, there aren't that many to talk about.

In fact, there is only one real negative, and that is less support.

You must be comfortable with using things like Terminal for setting up and connecting.

It is also worth noting that VPN providers will often supply GUI interfaces, although it is also important to remember that not all of them do this, so you might have to look a bit to find one that does.

But, us Linux users are typically more technically-capable than Windows or Mac users, this likely won't be too big of an issue for most.

Is there a free VPN for Linux?

Of course, free VPNs are also a possibility.

However, we would strongly advise against going for such services for multiple reasons.

First of all, we have already mentioned that VPNs provide less support for Linux users, and that's true even for premium services. When it comes to the free ones, they offer next to nothing, so you will be on your own if you require help.

Not only that, but free VPNs are often notorious for logging user data in order to sell it to advertisers.

As recently as this year a malicious installer was masquerading as a popular VPN service.

While Linux is typically much safer than other platforms, Linux users are just as exposed when it comes to their security online.

However, this is easy enough to fix simply by using a VPN.

Here, we have listed some of the best VPNs for Linux, many of which are a good fit regardless of the distro you are using.

Make no mistake, using the net without a VPN these days can be very unsafe, and so you should definitely consider it if you wish to secure yourself or your company.

They're also handy for unlocking streaming content or other geo-restricted services.

We recommend using ExpressVPN, but we've listed seven providers, so the choice really is yours.