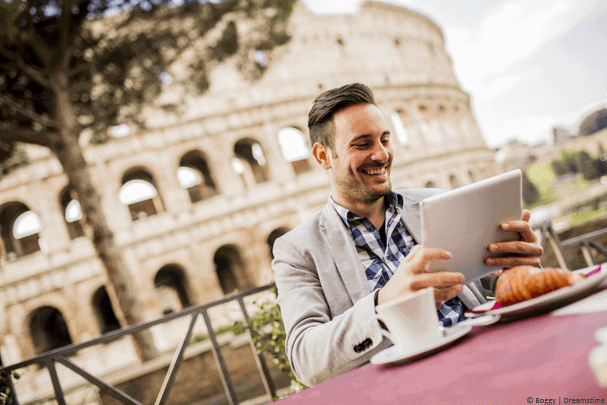 Italy is one of our favourite countries but like any country in the world these days online privacy is a big concern and even more difficult is finding the correct VPN service to use there.

In this guide we’re taking a look at the Top 5 VPN services to use in Italy.

Like any western country, or country in Europe in particular, Italy is often targeted with scams and lifting private details of Italian residents or those travelling there is a big deal for online scammers.

We’ve tested a whole host of VPN providers to find out which is the Best VPN for Italy and below we’ve rounded up our Top 5.

Just select a VPN and sign-up, they’re all suitable for use in Italy so you can’t go wrong.

IPVanish is our number 1 choice for a VPN service in Italy.

VPN servers are available in Italy itself in Milan. With servers in Italy it allows you to protect your privacy with minimal speed loss which is great if you connect to public Wi-Fi hotspots.

If you want to skip Italian internet restrictions then there are a mass of servers located nearby in countries such as Slovenia, Austria, Spain, France, Greece and many more.

If you want to hop outside the EU then nearby locations include Switzerland, Albania and Serbia. In total there are over 60 VPN server locations across the world.

Another plus to the service is the custom apps. IPVanish currently has apps for Android, iOS, Windows and Mac. There is even a client for Amazon devices such as the Fire TV and Fire TV Stick.

Our favourite feature of the service is their server speeds which makes them our top choice for use in Italy.

ExpressVPN makes a good choice for use in Italy due to the sheer number of worldwide locations they have available.

They have servers in two locations in Italy in both Milan and Cosenza which gives you options for location connection points. There are over 94 countries available to connect to which gives you a huge amount of options.

You can connect to both EU countries nearby or more private locations outside the EU such as Switzerland and Iceland. You can also connect further afield too in almost all major locations.

Apps are available for all major platforms including Android, iOS, Windows and Mac. There is also a Linux client available which is not available from most other providers.

ExpressVPN is a little bit more expensive than most other providers, however they do have a huge 30-day money back guarantee that lets you test the service to see if it’s suitable for an entire month. If you’re unhappy you can just get your money back.

VyprVPN makes a great choice for Italy because they’re one of the only VPN providers that offer a completely free trial.

Unlike most providers that offer a money back guarantee, VyprVPN let you test the service entirely free for 3-days. You do need to enter your payment details but it’s easy to cancel and if you find the service isn’t for you then you won’t be charged if you cancel before the trial expires.

We especially like the apps because they’re incredibly user-friendly and the layout is some of the easiest to use that we tested.

Servers are available in Italy and in all nearby locations both in the EU and outside. VyprVPN is also registered in Switzerland which puts them outside of EU regulation.

A special connection mode called Chameleon is available on the service which allows you to break through advanced firewalls and while not essential for use in Italy it’s always a good bonus feature to have available.

Best VPN for value for money

Connection speeds not the highest

NordVPN has many positive user reviews and they were also a favourite of our reviewer when we tested them.

They make a good choice for use in Italy due to having servers inside Italy itself and in most surrounding locations. They’re also one of the cheaper providers offering a good service at an affordable price.

We especially like their Double-Hop servers which pass your data through two different locations. Those suitable for use from Italy include Netherlands -> Switzerland and Netherlands -> Sweden. This gives you an added layer of privacy sending your data outside and inside the EU.

NordVPN stores no logs and they’re P2P friendly which means you can torrent freely across their network.

A range of payment options are available including standard Paypal and card payments as well as some unique payment methods such as Alipay, Wechat, WebMoney, Bitcoin and more.

If privacy is your number 1 consideration in Italy then VPN.ac make an excellent choice.

They offer advanced encryption options that aren’t available from most other providers and they have an extensive range of double-hop servers available.

Through testing we found VPN.ac to offer some of the fastest speeds on their single VPN servers and also when using their double-hop servers that pass your data through two different locations we also found them to be on the higher end of the speed scale.

VPN.ac do have less overall server locations but Europe and most major locations are available and also servers inside Italy itself.

One of our favourite features is the ability to connect on 6 devices concurrently which means you can protect your entire device range or family with just one account.