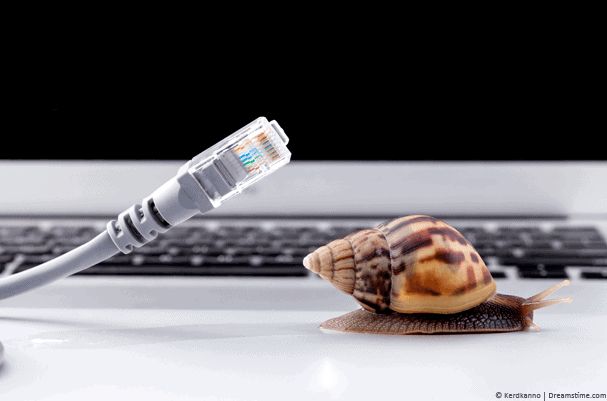 No matter what ISP you're with or in what country nearly all employ some kind of Throttling.

Throttling can be called many different names but is often referred to as Traffic Throttling or Traffic Shaping.

Basically, it's a nice way of saying “we're going to slow your speeds when you use a service we don't really want you to use”.

Often services such as P2P, Usenet and Video Streaming find themselves throttled.

Why does my ISP throttle?

ISPs sell internet packages that offer “unlimited bandwidth” or “unlimited speeds” but in reality if every customers was to stream video at the highest speed at the same time their network couldn't cope.

So they can continue making these wild advertising claims they limit your internet speed when you carry out certain tasks.

Often this is done in what they call “peak” times but “peak” is a very loose word and can include the entire weekend and all evening after 4 pm.

What can I do to avoid ISP Throttling?

To avoid ISP Throttling you can use a VPN service.

By using a VPN you disguise the type of traffic you are transferring. So if you use torrents, stream video or whatever else your ISP won't know.

All they will see is a secure connection from yourself to the VPN server and as such not reduce or throttle your speeds.

I've tested a range of VPN services to find out which is the Best for ISP Throttling in both the UK and across the world and below are my findings.

IPVanish offers an all round good service that is most suitable to avoid ISP Throttling.

The speeds on the service are some of the best I have experienced and if fast downloading and streaming high quality video is important to you then you'll appreciate this.

Using the ISP Virgin Media in the UK I was able to bypass their P2P and Usenet throttling which covers a big portion of the day allowing me to download at near full speed.

With 6 server locations across the UK and 60 across the world you have plenty of choices of where to connect to.

The recently redesigned software and apps for Windows, Mac, iOS and Android offer a simple way to connect, protect your connection and avoid ISP throttling.

Unlimited P2P traffic is allowed and they store no logs which means what you download or do while connected remains private.

ExpressVPN has 94 countries around the world covered with VPN servers so there is plenty of choices available to avoid ISP Throttling.

One feature you will love is they offer a massive 30-day money back guarantee which is one of the longest in the industry allowing you to test the service risk free.

With 3 simultaneous connections allowed on the service you can beat throttling on many devices within your home.

No matter if you're suffering throttling on a desktop, laptop, tablet or phone you'll be able to get the full speed of your internet connection.

Unlimited server switching, unlimited bandwidth and unlimited speed will allow you to enjoy a throttle free internet experience regardless of what ISP you use.

NordVPN offers something for everyone and will help you defeat ISP throttling easily.

Registered in Panama this highly regarded VPN provider offers an off-shore VPN service. While this isn't necessarily needed just to defeat ISP throttling it does give you extra privacy in the long run.

With their easy to use software and apps you'll be able to bypass throttling on a range of devices.

In fact NordVPN offers up to 6 simultaneous connections so you can bypass throttling on many devices or your whole family can use the one account in your household.

A strict no-log policy is in force that keeps what you download and do while connected private so you're free to torrent while avoiding throttling at the same time.

Not many world servers

If you want to avoid ISP throttling but you don't want to spend a lot of money then StrongVPN are worth considering.

While they don't have as many worldwide servers they do have good coverage in the UK, USA and Europe.

StrongVPN is one of the oldest VPN services in the industry and it isn't by chance that they've been around so long. Countless positive reviews show that current customers are extremely happy with the service.

The desktop software isn't my favourite but it does the job of getting you connected and allows you to bypass ISP throttling. However, the mobile apps are much more favourable.

A 5-day money back guarantee is available giving you just enough time to test the service to see how it can help you bypass throttling but if you're unhappy then you can get your money back.

If you've never used a VPN before then VyprVPN is definitely worth a look.

Their software and apps are some of the most user-friendly on the market and will guide you through the process should you be a bit apprehensive.

They also offer a 3-day trial that isn't common amongst other providers. Just pop in your payment details and you instantly get access to the service.

If you find it isn't for you or it isn't helping you bypass ISP throttling as much as you wanted then you can simply cancel without being charged. Through my testing I found them more than capable of bypassing ISP throttling and so it's unlikely you will need to cancel – although the option is always there.

Two packages are available and unless you live in a country such as Iran or China then the lower priced package will be more than enough to help you avoid throttling.