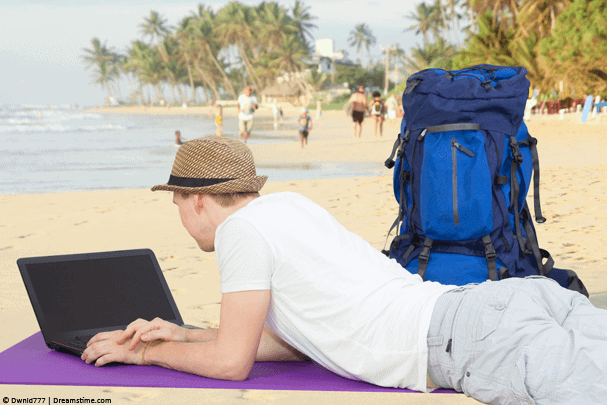 Being a Digital Nomad is great, isn’t it?

You can work from any location at any time and still get paid – you’re living the dream right?

Well as any good Digital Nomad knows the “dream” isn’t as dreamy as everyone else thinks.

Sure you get to work location independent but dealing with travelling, poor internet connections, self-motivation and a whole host of other things and suddenly that 9-5 office job doesn’t sound too bad… Ok, I went a little too far at the end, scrap the 9-5 idea.

Being a Digital Nomad often means connecting to some pretty sketchy Wi-Fi connections and missing out on TV shows and other services from back home.

As a digital nomad myself I’ve put some of the best VPN services through their paces and created this Best VPN for Digital Nomads guide to help you get the best out of your online experience.

A mass of VPN servers globally

IPVanish has without a doubt been the daddy of all VPN services for me while on the road.

With more than 700+ server locations scattered all over the world there is a local connection in nearly any city you visit and if there isn’t one in the city then there is definitely one nearby.

I especially liked that I could connect 5 devices at the same time, if you’re like most Digital Nomads you likely carry a laptop, tablet, phone and maybe even a few other internet connected gadgets.

Being able to install the VPN service on all devices and keep them connected at the same time makes life for me so much easier.

While I was travelling in Thailand late last year new redesigned software and apps were released which make connecting so much easier, you essentially just click once to connect and let it do its thing.

A 7-day money back guarantee is available letting you try the service without risk.

If you’ve travelled around a bit as a Digital Nomad then you’ll know that some internet connections can be pretty dire.

Whether it’s a hostel, cafe, shared apartment or anywhere else sometimes you just can’t get reliable internet speeds.

If you want to access TV content from your home country then with rural internet connections or even just poor city ones buffering can plague your viewing.

Overplay comes with a free SmartDNS service which although it doesn’t encrypt your internet connection it does allow you to stream content with no speed loss.

You get access to the fully blown VPN service too included in the price so you can also protect your privacy.

The software and apps are some of the most user-friendly I’ve tested so if you’re new to the VPN world then you’ll have no trouble getting secure.

If you travel around a lot more than the average Digital Nomad then you’ll want to check out ExpressVPN.

They have VPN servers in 94 countries which is one of the largest amounts out of any VPN provider.

Having access in some of the more remote countries is great because it allows you to get the best possible speeds when protecting your privacy. It also allows you to access blocked content from more countries.

Like both providers above there are apps for all major devices and also software for Ubuntu so if you have a portable Linux device you’ll be pleased you’re supported.

A massive 30-day money back guarantee is available which is longer than most other providers so you could in theory test the service in a few different countries to see if it’s suitable for your needs.

Great for China and Iran

If you’re more adventurous than the average digital nomad then the freedom to roam can take you to some pretty interesting places.

If China, Iran or any other country that has a restrictive internet regime is where you’re currently staying then you’ll understand just how locked down the internet is.

VyprVPN offers a proprietary VPN protocol called Chameleon. Chameleon was developed with countries such as China and Iran in mind.

Often these countries will penetrate your internet connection to detect if you’re using a popular VPN service and block you but Chameleon disguises the headers of your traffic so it doesn’t look like you’re using a VPN so you can freely surf the net.

There is also a 3-day free trial available with the service that allows you to check them out without paying.

NordVPN is located off-shore in Panama so if you’re a digital nomad that does sensitive work such as a journalist then their jurisdiction may be ideal for you.

A good selection of servers is available located around the world. In fact, NordVPN has servers in 8 of the top 10 “countries to be a Digital Nomad” as per NomadList.

There are some pretty funky security features built into the NordVPN service.

NordVPN have double-hop servers, this passes your data through two countries encrypting it twice giving you that extra peace of mind, sure there’s a speed hit, but if you have a good internet connection then you’ll appreciate the added layer of security.

If you’ve got an unreliable internet connection, and let’s face it, which Digital Nomad hasn’t at some point then the automatic kill-switch will be ideal. If the VPN connection drops for any reason then the NordVPN apps will automatically stop your internet traffic allowing nothing to leak outside the secure VPN connection.

To top it off no-logs are stored and we scored them 4.4 / 5 in our recent review – our second highest ever rating!

How to choose the Best VPN for Digital Nomads

Choosing a VPN service should be taken with care, much the same as choosing a backpack.

While the cheap backpack may have all the bells and whistles of the more expensive backpack, the overall build quality may be poor.

Below are three considerations you should make when looking for a VPN for Digital Nomads.

Internet speed is always going to be an issue as a Digital Nomad. Adding a VPN into the mix will add further slowness due to encryption.

Selecting a VPN provider that has servers in the countries you’re intending to visit or live in will give you the best possible speeds allowing you to have a protected internet connection while limiting any speed issues.

VPN services pretty much all cost about the same give or take but this is where the similarities stop.

Some VPNs are super fast and others slow as a snail. Unfortunately it’s impossible to know which is which until you’ve signed up and handed your money over.

All five above have been tested for speed and are some of the best in the industry. Getting a fast VPN service is essential as a Digital Nomad.

From the roadside cafe to the backpacker hostel. Any number of free Wi-Fi connections could be holding nasty surprises and having your data stolen as a Digital Nomad could in very extreme cases signal the end of your career.

The five providers listed above all employ top encryption to keep you safe when travelling.