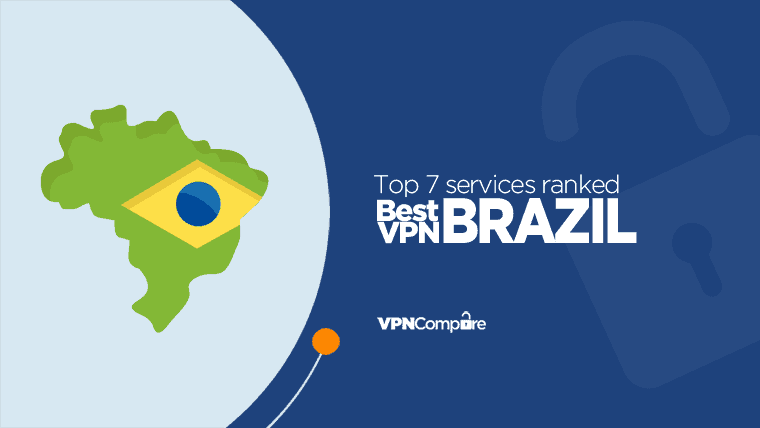 From Boa Vista to Rio De Janeiro, Brazil is a beautiful country.

Imagine if you could access all of the apps and websites that you wanted while being in Brazil and stay secure at the same time.

It would be great, wouldn't it?

Well, with just a few clicks you CAN. To do so, you'll need a VPN.

In this article we'll show you exactly how to unlock any restrictions and keep your internet habits private.

Below we explore the seven leading VPN services suitable for using in Brazil either as a resident or tourist.

ExpressVPN offers one of the fastest services around, if not THE fastest.

In fact, in our testing, they outperformed nearly every other provider.

With over 3,000 VPN servers worldwide including local servers in Brazil, Uruguay and Peru, you won't fail to find a fast and reliable connection nearby.

Local servers give you the fastest download speeds available, which are perfect for streaming video content with no interruption.

ExpressVPN's no log policy ensures that your personal information and data will be safe in their hands. No sharing your data with government entities, keeping you safe and secure. They've even been audited by a third party to confirm this is true.

Their dedicated VPN apps will allow you to access other region's content with a click of a button with its user-friendly interface or keep what you do on the internet private.

It works brilliantly on all popular devices such as iOS, Android, Windows, Mac & Linux. We especially like their Fire TV app, which is straightforward to navigate.

Their monthly package is a little expensive but big savings up to 49% can be made if you take a 12-month subscription, no outrageous lengths here.

Our Recommended Choice for Brazil

PrivateInternetAccess has access to over 3,351 different servers in over 37 different countries, meaning you will never be stuck for a connection.

Now owned by the same company that brought you CyberGhost VPN (we'll talk more about them later…) they are known for having a great track record and guarantee that your data and information will not be shared.

Users have continued to rave about the service simply known as ‘PIA' for years, commending them on their court-order tested no-log claims.

Their app is available for most devices of which you can have ten different devices connected at once. Ensuring that no matter what device you are using, you remain safe and secure from any unwanted snooping.

With 15 years in the business, it's clear to see that CyberGhost VPN knows what they are doing when it comes to protecting your data.

They boast a MASSIVE 6,100+ servers in over 89+ countries which is one of the largest on the market to date. With servers in Brazil and other local countries, your connection will remain fast and reliable.

Once you sign up to CyberGhost VPN, you will be able to connect seven devices at once including Windows, macOS, iOS, Android, Amazon Fire TV & Fire Stick, Android TV, Linux, and even routers.

We like their dedicated options for unblocking TV content, so if you're a Netflix or BBC iPlayer fan, you'll be able to connect quickly.

Speeds are described as “lightning fast” and in our review, we noted this to be true. They also offer some of the most reliable connections on the market.

If streaming is one of your needs, then they have you covered. VyprVPN is now a completely no-log service, so if privacy is what you're after they tick this box too.

Prices have been reduced and there's a 30-day money back guarantee. As one of the established providers, there's little we don't love about their service.

Probably the VPN you have all heard of and with good reason. We like the  double VPN service on offer meaning all of your activity is run through two different servers so that your data is twice as secure.

It's a feature you won't find from many other providers.

Speeds on the service are fine, although they're certainly not the fastest but connections are reliable and we haven't suffered any issues with losing connection.

All of the payment plans come with the industry standard 30 day money-back guarantee.

However, even with all its merits, it does have one downfall. As it stands currently, it doesn't accept payment via PayPal. If you require that, you'll need to stick with one of the earlier four options.

One of the cheapest VPNs currently on the market with prices as low as $1.97 per month. However, regardless of its low price point, it certainly doesn't lack many features.

Surfshark allows you to connect and use all of your family devices simultaneously without any performance issues. That means they're one of the only services to provide you with unlimited connections.

It also boasts a Whitelister feature that allows certain apps such as Banking Apps or your printer network to use your real IP address rather than the IP Address given to you through the VPN. It's a neat feature and one we appreciated.

One thing to note: Several of the countries around Brazil are Virtual Servers, while this isn't a huge negative, it's certainly something you should take into consideration if you need your actual connection to pass through a specific country nearby.

At a slightly higher price point than all of your other options, you have IPVanish. Even with its higher price, it is still a good service offering 1,300 VPN servers to connect to in over 75+ locations.

Servers in Brazil are based in Sao Paulo and Rio with nearby locations in Colombia, Chile and Argentina.

You will have the ability to connect to 10 devices simultaneously. The apps are available on most popular platforms such as Amazon, Android, Apple, Windows and Linux so you will be able to connect your devices with ease.

IPVanish boasts a 24/7 customer support service which can come in handy if you run into any problems with the service.

They certainly wouldn't be our first choice but if you've exhausted the above options, they're a good alternative. Just remember you only have seven days to test them and get your money back, which is a bit limiting.

Why you need a VPN in Brazil?

There are multiple reasons why you should use a VPN both in Brazil and anywhere else in the world. Below we're discussing a few of the main reasons:

In Brazil, some sites and apps have been restricted or are simply not available in the country.

For example, back in 2015, WhatsApp was banned due to the app failing to comply with a criminal court case. This meant that you no longer could use the service as a means of keeping in touch with your friends and family.

As you can imagine, it wasn't a popular decision with the local population.

Fortunately, the decision to ban the app was overturned, and WhatsApp is back up and running again.

But if it's happened once it could happen again. Having a VPN will allow you to carry on using WhatsApp as if nothing had happened even if it's banned again in the near future.

Check out our ExpressVPN review to see how they can help you beat censorship.

Back in 2018 between January to June, Google received 338 government requests for content removal, and during the same time, Facebook had 2000 pieces of information restricted by the Brazilian government (source).

Information has also been restricted around elections, mainly blogs that portray the government in a negative light. Any websites that do so are quickly blocked or restricted.

Again, using a VPN allows you to keep accessing these without issue.

If you are a Brazilian local who enjoys watching some American TV shows, or perhaps you are travelling around Brazil and want to catch up with your home Football team then you will want to use a VPN to unlock other region's video content.

Imagine you're able to watch everything that the US Netflix library has to offer at the click of a button. Or perhaps you want to unblock other overseas content in Portuguese.

A VPN will allow you to do so.

When you are using public Wi-Fi connections, you have to be extremely careful as you'll open yourself up as a potential target for unwanted snoopers looking to access and steal your information.

Using a VPN will help stop this in its tracks, keeping your information safe and secure from any unwanted intruders.

The Brazilian Government has been known to monitor your internet activity, asking internet providers to keep logs of all your activity and in the process building a profile of your search history.

NecessaryandProportionate.org says “when providing an Internet connection, the relevant independent system provider .. has the duty to keep connection logs” (source)

This could become a problem for you, especially if you have been speaking out about the government or the establishment.

Even if you're not particularly outspoken, it pays to retain your privacy.

1) Is using a VPN in Brazil illegal?

Although there have been some censorship issues in Brazil, using a VPN is perfectly legal, there aren't any sanctions or laws against their use.

They're used by big business to conduct sensitive transactions so it's unlikely most countries would seek to outlaw their use.

There are plenty of free VPNs around. However, we strongly recommend against their use.

They may not cost money, but you will end up paying for your VPN with your data.

This has a lot of dangers in itself. If somebody uses your connection for illegal activity, it could lead back to you.

Good luck explaining that one to the authorities.

When it comes to using a local Brazilian VPN, we would suggest that you stick to the ones in our list.

While there might be some local VPNs available to you, you never know who is running them and what they are doing with your information.

The last thing you need is to find yourself a victim of a government honey trap designed to snoop on unsuspecting victims and try to use their data for no good.

Who knows where that could end up, most likely a hefty fine or at worst a prison sentence.

You certainly don't want either of those.

We recommend sticking with renowned international VPN services that have been tested and weather over many years. It's safer than plumping for a little known service that no one has heard of.

If you are looking to protect you and your data from any unwanted snooping from intruders, then you will need a fast, secure and reliable VPN service. Our number 1 recommendation is ExpressVPN.

Using such a service will allow you to remain mostly anonymous when surfing the web and will give you access to any websites or apps that are restricted within your region.

Not only that, but you will be able to access content from other countries that are geo-restricted to certain regions, such as certain Netflix libraries or Online TV services.