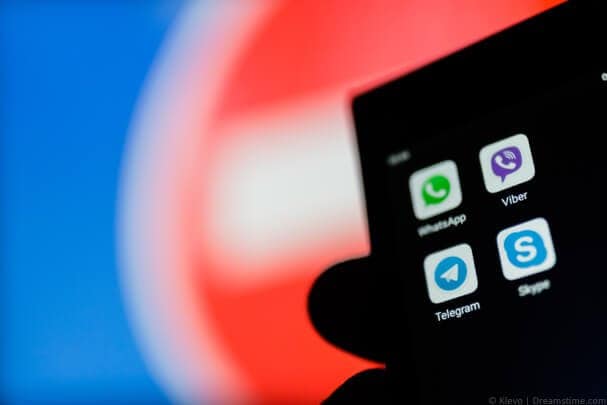 There are hundreds of messaging apps out there but finding a secure one is troublesome. That's why we've whittled it down to just five options for you helping you to choose the best for your needs.

The methods of communication continue to evolve, and these days, most people tend to reach others through different messaging apps.

However, as awareness of online surveillance continues to rise, many have started searching for secure messaging apps which will encrypt their correspondence, and make it unreadable.

Businessmen, journalists, and even criminals would use these type of apps in the past but that has all changed.

Today, even regular people with nothing to hide, see an increasing need for such apps. If you are looking for the best ones yourself, here are our five recommendations.

Below are our top 5 picks of apps that will help you chat more privately.

It's not an exhaustive list, and there are plenty of messaging platforms available, so it pays to do further research if you have time. 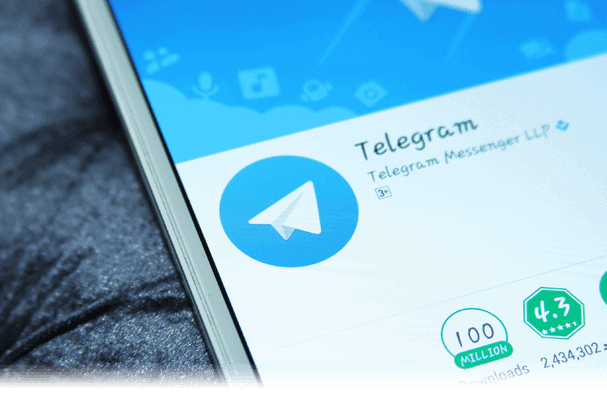 Telegram is one of the best-known secure messaging apps around the world, with millions of users in nearly all countries.

It was founded by Pavel Durov, who himself feels the need for greater security, privacy, and online anonymity. Even so, Telegram's default settings are not considered to be 100% secure, as the provider could still see your messages.

But, there is a solution for this, and a way to bypass it, and that is to use the ‘secret chats' feature. The feature will make your conversation only known to you and the person you are chatting with, with no one else seeing your correspondence.

Telegram supports group chats of up to 200,000 members which is a huge bonus for building a community around a specific topic.

The feature is easy to enable and use, and it is one of the reasons why Telegram became so popular in the first place. The app is available on iOS and Android along with a number of other devices types.

Another big reason is that it is merely a useful app that mirrors popular none-secure apps like WhatsApp, Messenger and others but provides secure usage. 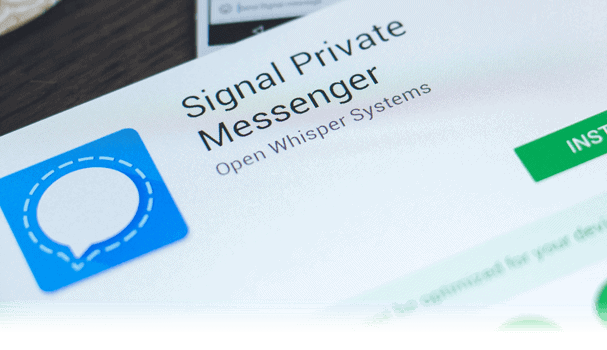 Next, there is Signal – free, open-source software that was created by a San Francisco-headquartered Open Whisper Systems.

Signal is a very secure app that uses its own ‘Signal protocol', which you can use on Android and iOS alike. Signal also likes to claim that it is not a real company, but a group of volunteers, containing a small team of dedicated developers who work together to improve safe communication.

The app became very popular, and it is considered so secure that even modern-day politicians are using it.

It is among the most secure and most popular messaging apps today and the main competitor to Telegram. It encrypts your messages and chats completely, and even Edward Snowden supports its use. 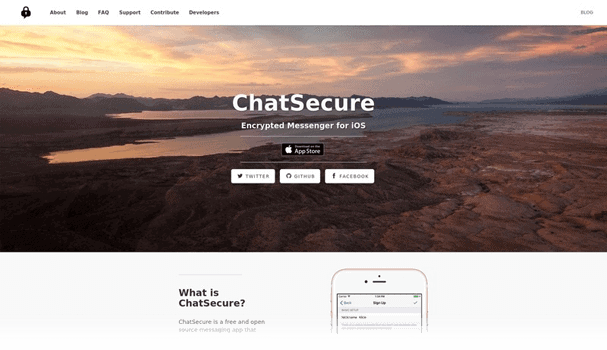 Then, there is ChatSecure, which is another popular app, although nowhere near Signal and Telegram when it comes to popularity.

It is also free, as well as open-source, and it can be used on iOS only, there was an Android app, but this is no longer in production. It offers end to end encryption, and its dedication to security is evident when you consider that one of its creators is the same person in charge of running the site Open Watch – Chris Ballinger.

Ballinger is a big fan of open-source software, so ChatSecure is an open-source project as well.

In other words, anyone can inspect its code and confirm that it is as secure as it claims. Of course, you must always remember to establish a safe/private connection before chatting manually, so do keep that in mind. 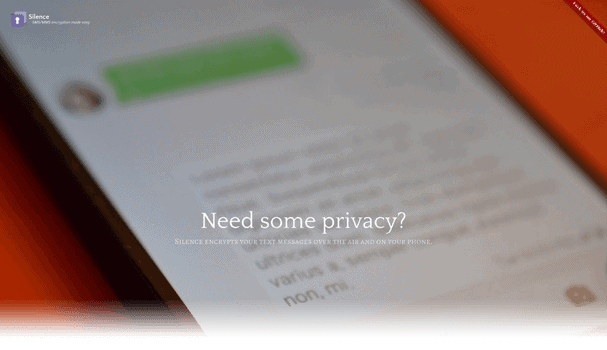 Silence is an Android app, with no support for iOS at this time. But, it is a private messenger that made the list due to its simplicity, robust privacy features, and powerful encryption.

Once you set it up, it starts acting nearly as the go-to, in-built messaging app, and is capable of replacing the original one. It does not even require an internet connection to work, as it sends SMS text messages instead.

This also means that the app has no connection to any external server, and you can get directly connected with the person you wish to communicate with.

Of course, the SMS is processed through the use of an external server, but they do not store the information, and the data is not visible to anyone apart from the sender and the receiver.

Silence isn't a messaging app in the real sense, but it does allow secure communication through SMS which is an excellent feature especially in countries where the internet and chat apps can be blocked at a moments notice. 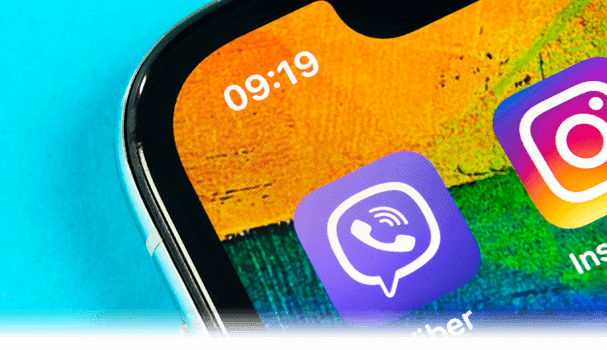 Finally, we have Viber, which is currently miles above what it used to be like when it first came out. Back then, it was a poor man's WhatsApp and did not even offer encryption.

However, it remained semi-popular, which allowed it to keep improving and rolling out new versions.

One of them brought total end-to-end encryption and made Viber one of the more secure messaging apps today. It may not be your first thought, but it's worth checking out if you're looking for a more mainstream app that allows easy messaging and calling.

The service also has its ‘Viber Encryption Overview,' which will allow you to see and understand all the details of the app's security.

Whatever you send through Viber will be encrypted, and nobody will be able to see it apart from the recipient. Viber also has a ‘self-destruct' mode, which lets you erase messages after a certain period. It is one of the best and most secure messaging apps today.

Which is the most secure chat app?

The ‘most secure' app is a difficult question to answer, as all of the mentioned apps – as well as many others that did not make it to the list offer some security aspects.

Of course, no app offers everything, and sometimes, you must make compromises. But, with that said, Telegram and Signal are probably the best ones, if not the very best out there.

It often depends on which camp you're in and which is used most in your group of contacts. 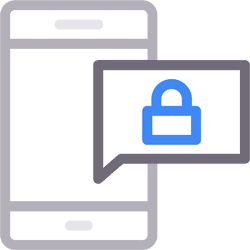 As mentioned, it is almost a tie between Signal and Telegram, but Edward Snowden decided to support Signal, and considering his experience and past – his advice should be considered.

Signal lets you use group messaging, it lets you delete specific messages, and it even offers ‘Disappearing messages' feature which will delete your messages after some time automatically. You can also verify your session and confirm that no 3rd parties are spying on you.

Which messaging apps have a desktop client?

When it comes to the five apps listed above, you can use some of them on desktop, in addition to having their usual mobile app.

Telegram is one of them, which makes it even more deserving, but it is not the only one. Signal also has its desktop version, and so do Viber and ChatSecure. You can use them on Windows and Mac alike. 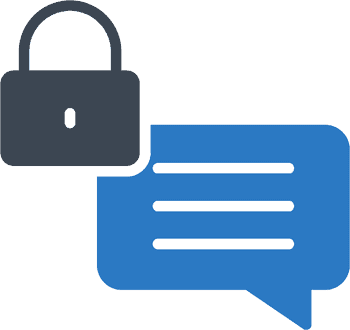 Typically, desktop versions are just as easy to use, you can synchronize them with your phone app, and make communication not only secure but also easier and faster.

It's worth noting that it's often the case that not all features are available on the desktop clients that are available in their mobile counterparts. For example, Telegram's secret conversations feature isn't possible and many don't allow voice calling through desktop clients.

What is a good app for sharing files securely?

When it comes to sharing files, most people tend to use cloud solutions, such as Google Drive, OneDrive, DropBox, and alike.

However, if you wish to share files via the messaging app of your choice, that is also possible with most of them. They will let you send images, voicemail, videos, and even text files, all of which will be just as secure as regular messaging. 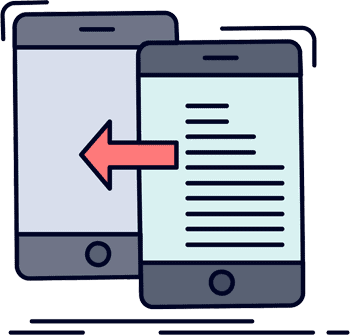 Things might be more complicated when it comes to Silence, as it acts as an SMS service, but all the rest on this list will let you do it with ease.

Is Telegram messenger secure? Is it more secure than WhatsApp?

Of course, wherever multiple apps are doing the same thing, there is bound to be a rivalry.

Telegram is most often compared to WhatsApp, which is another extremely well-known messaging app. WhatsApp boasts more than 1.5 billion active users, while Telegram manages a lesser but still respectable 200 million. 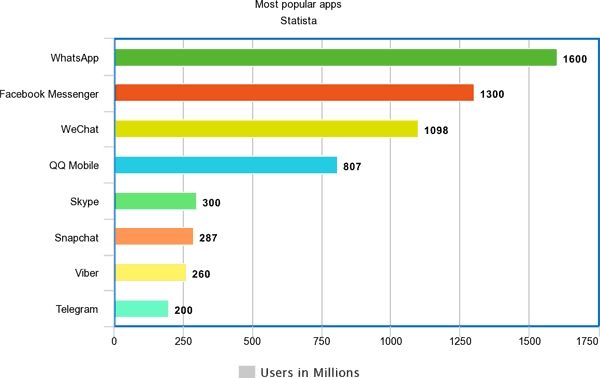 However, one reason why most people tend to use Telegram rather than WhatsApp, at least those who are concerned about their security and privacy is back of Whatsapp's ownership by Facebook.

Facebook has had quite a few privacy-related incidents, and people have lost trust in it.

WhatsApp also allows you to send secure messages, delete them whenever you wish, and it also has a web version.

But, it lacks Telegram's secret chat, which is why Telegram might be a better option. Again, this is all dependant on the types of contacts you're conversing with. It's more likely you'll find users with Whatsapp but convincing your circle of friends to move to Telegram will increase your privacy.

As you probably know, encryption is one of the most effective ways to ensure your data security and this is the case with the security of your chats and messaging.

With end-to-end encryption, data is supposed to be secure the entire time, and only the sender and the recipient should be able to see what is sent.

Reading encrypted files requires access to a secret key, or password, which allows you to decrypt it. Of course, messaging apps do it all automatically, and you send and receive text or files without having to decode them manually.

Simply put, it is a system of communication where only those who communicate can read the messages, and no one can spy on eavesdrop on such a conversation. 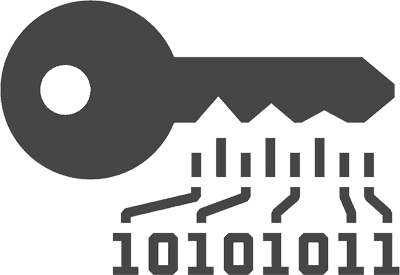 This includes telecom providers, ISPs, and even the company that owns and operates the messaging service.

Facebook and WhatsApp use this feature, and a lot of people see no issue with using these services, But, as mentioned, many believe that Facebook is not trustworthy. While this may be true, the technology doesn't lie, and WhatsApp should be completely safe and secure.

The decision as always lies with you, the user.

Choose a chat app these days is difficult because there is so much choice.

Often what messaging app we used is dictated by what our social circle or business contacts use.

Keeping your chat history private has gained in popularity in recent years, which means apps like Telegram and Signal are becoming more widespread. While they're not quite there yet, there is a slow movement to move away from the traditional apps like WhatsApp and Facebook Messenger.

All of the above five options will increase the security and privacy of your conversations. It's a difficult decision between Telegram and Signal, but ultimately we went for Telegram as the best encrypted messaging app, and as the more popular app you'll likely find more of your contacts using it.

Ultimately, however, the choice is yours, but using any is your first step to increasing your privacy.