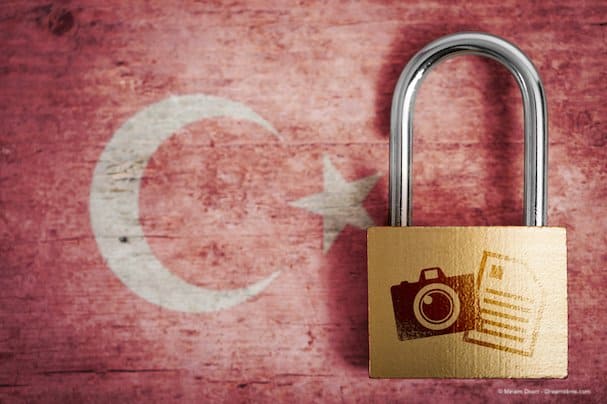 A new report has revealed that over the past four years, the Turkish regime of President Recep Tayyip Erdoğan has censored almost a quarter of a million websites and domains.

The revelation reveals why so many Turkish people are turning to VPNs such as ExpressVPN in order to access the internet freely. It also explains why the Turkish regime is so keen to crack down on access to VPNs.

The report has been compiled by academic and cyber-activist Yaman Akdeniz and researcher Ozan Güven for the Istanbul Freedom of Expression Association. They found that between 2014 and 2018 a total of 245,825 websites and domains had been blocked in Turkey.

A total of 54,903 sites were blocked in 2018 alone with requests coming from 578 different organisations, many with clear links to the regime.

At the same time, the number of arrests related to the posting of online content has also soared. The countries Interior Ministry examined a total of 26,996 social media accounts in 2018. Legal action was subsequently taken against an enormous 13,544 of those.

The report speculates, with some justification, that the climate of fear this environment has created has also led to a significant increase in self-censorship as Turkish people seek to avoid falling victim to the regime’s crackdown.

Turkey first passed an internet censorship law back in 2007. This original legislation was intended to protect children from accessing illegal and harmful content. However, in the 12 years since this law has been repeatedly amended to broaden its scope.

The blocked sites include dozens of news sites as the Erdoğan regime seeks to control the flow of information to the Turkish people. Turkey is also the country which has made the highest number of content removal requests to both Facebook and Twitter in the past six months, despite only having the world’s 17th biggest population.

They made a whopping 1,105 requests to Twitter for content removal over the most recent six month period Twitter has reported. By comparison, the next highest country was Russia which made 372 requests.

It is no surprise that it is opposition-backing news outlets which have felt the force of Turkey’s online censorship the most.

Sözcü, an opposition newspaper, had the most content blocked in 2018, with 204 different items falling foul of the censors. Similar publications Cumhuriyet (196 items) and Hürriyet (190 items) were next on the list.

VPN use on the rise in Turkey

Given this situation, it will come as no surprise that VPN use in Turkey is rising all the time. An estimated 32% of Turkish internet users connect to a VPN before going online. This gives Turkey the third highest VPN usage rate after Indonesia and India.

Needless to say, the Turkish authorities are well aware of this and have sought to crack down on the loophole too. The regime has attempted to block access to VPNs but their efforts have so far failed to yield much success.

It is fair to say that their efforts to enforce the ban have been half-hearted at best. Most premium VPNs including ExpressVPN, NordVPN, and IPVanish continue to function as normal in Turkey.

It is worth warning VPN users in Turkey that there could be consequences if you are caught using a VPN in the country. But the likelihood of this happening to the users of any top-end VPN are minimal.

Indeed, for opposition politicians, journalists, and human rights activists, who already face significant risks in going about their business, VPNs are a mandatory accessory these days.

They are also increasingly compulsory for Turkey’s ethnic minorities, especially the Kurdish populations in the east of the country which have faced significant oppression from the Erdoğan regime.

What the future holds?

Turkish politics currently finds itself at a bit of a crossroads. The ruling party recently lost the election for the Mayor of Istanbul, one of the country’s most important political jobs. The forced a rerun of the vote but then lost again.

This suggests that the feverish popularity of Erdoğan and his nationalist policies are on the wane and opposition popularity is growing.

However, this situation is likely to spark a backlash with Erdoğan unlikely to want to relinquish his grip on power anytime soon. The result is likely to be yet more online censorship and restrictions as the authorities try to crush any form of decent.

This means that VPNs are likely to become more necessary in Turkey rather than less and the proportion of Turkish people using them looks set to rise still further.