Top 10 worst VPN Scams and how you can avoid them

If there was ever a time that VPNs were needed then now is that time, but unfortunately, not everything is always as it seems.

As privacy is being ever more eroded, we're continually being told that we need a VPN and I couldn't agree with this more.

Unfortunately, as good as many VPN services are, there are those that are less than honest. Plus it's not just the VPN services themselves that can be lacking but their offers can be disingenuous, the review sites you'll find them on false and plenty of other scams and pitfalls to be aware of.

Below I've rounded up the ten worst scams in the VPN industry and how you can avoid falling victim to them.

One of my biggest gripes is the ‘lifetime' VPN account. This is the account that you pay one price for and it lasts ‘forever'.

Well, forever is a long time and selling a service that needs constant funding for what is essentially the rest of time is unsustainable. Luckily this kind of sales tactic has started to go by the wayside somewhat but there are still a handful of VPN services promising this type of deal.

Think of a lifetime VPN account similar to a pyramid scheme. The service needs a constant stream of new customers to continue paying for the service.

As soon as they take a dip in signups you'll see the service suffer until finally it closes or using some obscure terms and conditions you probably didn't read (or was so hidden you couldn't find it) your lifetime account will suddenly be restricted to a shorter period or come to an end all together.

Our recommendation: Take a 1 or 2-year account, they offer some of the biggest savings without the risk.

Getting something for free is highly tempting instead of paying for it, but let's consider this in more details.

If running a VPN service was cheap then why wouldn't all services offer their product for free? And, no, it's not because they're trying to make a profit from something that's costing them nothing.

Infrastructure like servers and bandwidth cost money, staff, marketing and every other facet of a regular business exist in a VPN business.

If a service is ‘free' then ask yourself, how are they managing to pay for all the things that they need to run that service?

The answer is simple, by a broad range of other monetisation tactics. Adverts, injecting things into your connection, monitoring and selling your usage data and a whole other range of revenue generating methods.

Our recommendation: When a paid VPN service costs just a few pounds (or dollars) per month, why take the risk with a sketchy ‘free' service?

Just like iffy VPN providers, there are a whole host of sketchy VPN review sites.

We're run independently and have no direct affiliation with any VPN service. While we do earn a commission if you choose to sign up to one of our recommended providers you are welcome to visit their sites directly without using our links.

As 99% of VPN services offer a commission for sales, it makes sense that we recommend only the best. As one of the longest-running VPN comparison websites, it's our reputation at stake.

Unfortunately, not all VPN services or VPN comparison websites are so honest.

VPN providers themselves own some VPN review websites. For example, PureVPN owns the VPNRanks website and recommends their own service as the top choice for a multitude of reasons.

PureVPN is ranked top on a site owned by PureVPN, coincidence?

Equally, VPN review websites have been known to buy out small VPN services, such as BestVPN.com which owns BufferedVPN and was recommending them highly until this link came to light and saw them scale back their recommendations slightly.

Our recommendation: Consult multiple review sources including professional review sites such as ours and public reviews on sites such as TrustPilot.

Time-limited deals are always enticing. You can get a service at a bargain price if only you sign up within the next X amount of hours.

But how genuine are these deals?

The VPN industry is no different from any other. While there are some excellent deals to be had and many are time-limited or restricted to specific holidays or promotion periods, not all are as they seem.

A tactic employed is to have a deal that seems to never end. If you live in the UK you can think of this as the “DFS” effect.

Our recommendation: Check a VPN provider's website throughout a few days. If you see the same deal ending within the next 24 hours every day, then you know although the price may be good the deal isn't as genuine as it seems.

Marketing is a way of making things sound nicer than they might actually be. Again, the VPN industry isn't alone in this and while it's not technically a ‘scam' as such it's something worth bearing in mind.

When you think of the monthly price of a service, you probably think of paying per month for that. When deals are offered those monthly prices are correct, however, they're only available when you commit to paying for more prolonged periods up front.

If you see a regular monthly price of $10 but you can get it for just $2-3 per month, then you can guarantee you'll need to pay 1-2 years up front to take advantage of such a low price. 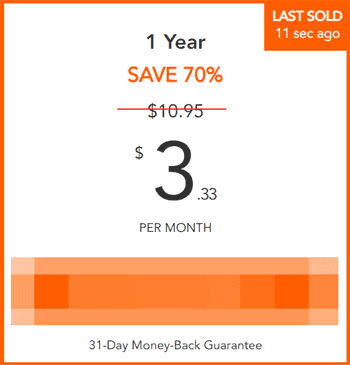 Save 70% but only if you pay for a year upfront.

Our recommendation: Consider annual or longer deals but remember that you're paying for the period up front and not monthly. You'll still make massive savings this way.

Pop onto any app store and search ‘VPN' and you'll find the most popular VPN apps.

It's not uncommon to see apps downloaded 10 million+ times. That must be an excellent VPN service, right? Wrong!

Often the most popular VPN services on app stores will be those sketchy free VPN services. Why are they so popular? Well, the fact they cost nothing means plenty of people are happy to download them without a thought.

Think back to our #2 scam and you'll remember ‘free' VPN services aren't all they're cracked up to be. Just because a VPN app is popular, doesn't mean it's any good.

Our recommendation: Don't get sucked in by large numbers of downloads. Instead stick with a reputable paid-for VPN service.

Almost every VPN service claims to store ‘no logs' of what you do while connected to their service.

The reality is, this often isn't as true as the claim itself. Reading the privacy policies or terms of conditions of services will often show they do store some details of your account.

This can be as simple as your payment method to more critical data such as the times you connected, what servers you used or worse.

Our recommendation: Look for VPN services that have proven ‘no-log' policies either through audits, court cases or other news stories that confirm their claims.

8. The VPNs that aren't VPNs at all scam

The term ‘VPN' has been hijacked and is used for all sorts of online security tools.

The difference between a simple proxy and a VPN is vast. While one will only mask your IP Address, the other encrypts all of your data.

Don't be fooled by simple proxies that are usually offered as web-browser extensions that while they can hide your IP Address, don't encrypt any of your internet data.

Our recommendation: Use full desktop or mobile VPN clients, don't simply rely on web-browser extensions as almost all are nothing more than simply proxy services.

9. The never heard of VPN scam

Just because a VPN service makes you pay for it doesn't mean it's reputable.

It's always recommended to use a service you're paying to protect your privacy over one that's free. However, that can be used to an unknown services advantage.

Don't be tempted to sign up for VPN services that you've never heard of or that there's little information available about on the internet.

While you'll find both good and bad reviews of all VPN services because no one can agree which is best, they at least indicate the service is known.

A VPN service that has little or no feedback or the name is unknown should be avoided. While new VPN services do pop up regularly, there is a reason most reputable VPN services have been in operation and continue to be so for more than five years.

Our recommendation: Stick to popular brand name VPN services. While all VPN services can have their faults, it's better the devil you know.

As much as ‘free' VPN services don't get our approval they're at least a step up from the fake VPN service.

Usually offered as ‘free' VPN services shady businesses run these fake VPNs in locations you really ought to be avoiding if you value your privacy.

Popular services such as TurboVPN are run by unknown entities most likely operating out of China.

Chinese internet is heavily restricted and with large companies like Huawei coming under fire for alleged links to the Chinese government you'll want to question what small unheard of VPN services ran by unknown corporations out of China are doing with your data.

So much so is the risk that US Senators have asked Homeland Security to investigate the risk posed by overseas VPN services.

Our recommendation: Again, avoid free VPN services and those that are widely unknown. Stick to brand name VPN services.

As our privacy is continually eroded a VPN is one of the best tools to take back control.

However, like all industries, the VPN industry isn't without its pitfalls. Don't be quick to sign up for any VPN service. Spend some time doing a little research and compare multiple sources before choosing a VPN.

Take heed from the warnings above and you'll end up getting a reputable VPN service that will increase your privacy and help you take back control of your online data.